It was late on a Sunday evening, the end of a summer’s day, and I was travelling home with my wife. Thin shimmers of mist drifted like skeins of bleached yarn just a few feet over the moorland marshes that skirt the southern approaches to Glasgow. In places, sheets of vapor tapered so fine that you could have lain on the ground and seen quite clearly underneath, and then stood up tall and seen above—but be lost in swirls of invisibility in the layer running from the knees up to the chest. We were enraptured, and yet, as the moon rose with the freshness of a maiden’s face, this scene strangely contrasted with many of the faces that had filled our day, and with the fog that had seemed to dull their human brightness.

We drove past a wind farm where vast blades languished in the calm. Gone was any grace that might have filled their normally arcing arms. Devoid of dynamism, they cluttered the hillside like clashed oars in a boat race pile up, or the hours, minutes, and seconds hands in some mad hatter’s clock shop, jammed in random still motion.

The scene of surreal imagery, with such mechanical invasion, made it hard to see the beauty in the landscape no matter how forcefully I thought of rising sea levels and low-lying Bangladesh, the ideal of renewable energy, and the knowledge that “it’s this or nuclear or belt-tightening beyond the level of political electability.” 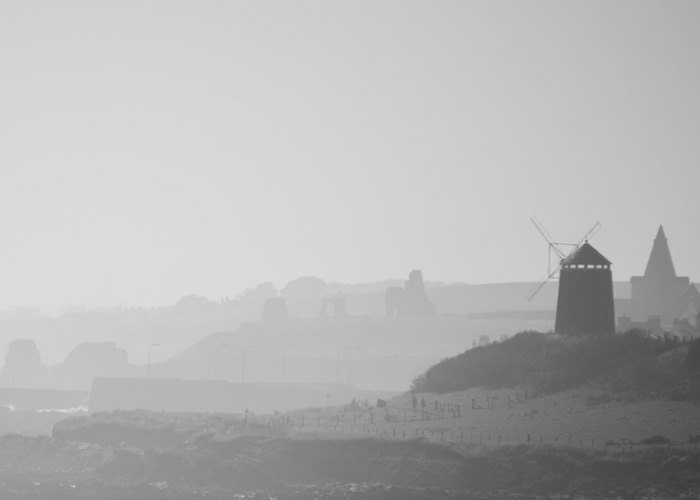 Jangular, I said to Vérène, as the adjective shaped itself in my mind. Jumbled, jarring, angular.

For it had been a jangular day. We had spent that Sunday with people who, as it happened, were mostly religious in a liberal sense, ecological, and community-minded—people who were often using their professional lives to make the world a better place. But we’d had a series of conversations that never quite took off, a mixing with many who seemed to have lost their shine.

When the wind goes out of people’s sails a blandness settles on them. You can feel the exposed jangular. The flow of conversation stiffens as if the fog has softly deadened their grace as living beings.

“What’s wrong with so many folks these days?” we were asking ourselves. The question brought to mind somebody I’d recently spoken to who’d just come back from the annual conference of a major national environmental group in London.

“What was the vibe?” I’d asked him. The theme of the event had been climate change.

It’s so easy to become one. There’d been a lot of positive energy in the environmental movement here in Europe before the UN gathering at Copenhagen in 2009. Then came the pile up in the boat race. Broken oars everywhere! For the world’s leaders had come, they looked at climate change and saw, but they went back home again deciding not to conquer. I was unsurprised. Most green campaigners at the time had little idea just how deeply complicit we all are in the high-carbon economy. The depression in the heart that has subsequently hit so many of our number was a confrontation with reality.

I hit on a striking example of this disillusioned depression on an Amazon book discussion forum. What caught my eye was the posting’s title: “Apology…I got it very, very wrong.” The apologist, called “The Fount,” had this to say:

For many, many years [The Fount] dreamed of a society based around fairness and justice…[S]adly I now realise this dream was based on a totally false premise…that human beings matter…that human beings have worth…[H]ow wrong was I…Mega wrong…  Humans are merde de la merde…vermin…biggest vermin on the planet…greedy, violent and destructive.  Human beings need to step back and observe their nothingess…pathetic little robots leading sad and dull lives.[1]

There you see the jangular genre. The fog—or is it smog? The shutting down of life through slow smothering. Its dismal cadence of illusion, disillusion, depression, and eventually, nihilism. Because this is about inward dying.

It brings me to the question: what does it mean to be human? That was the thought turning in my mind as I’d observed those good people on that Sunday. I was asking: Are we only egos on legs of meat, here today, gone tomorrow? Are we, as The Fount suggested, “pathetic little robots leading sad and dull lives”?

But here’s the rub: How can “The Fount” be certain that we are humans only at the materialist level of being and meaning?

The alternative to a materialistic worldview is one that is spiritually predicated. We may wonder what the evidence for this alternate view is, but that’s too big a question for this short piece. Suffice to say that as Vérène and I discerned the day as we made that journey home, we also made an observation. The conversations that had been most alive were those kindled by the spark of spirituality.

That’s a hard quality to pin down. It is most certainly not synonymous with religiosity, though there is often overlap. Rather, it is more primal. It seems to have to do with being connected in with a source, to a fount if you like, that carries us beyond our own individualism.

And here’s another rub. A lot of the people with whom we’d spent that Sunday were thinking folks who’d say, “I’ve got my spirituality, but I don’t want any God.”

I understand such statements especially from those who have been subjected to spiritual abuse, but they always leave me thinking: What if, in the great working out of reality, there’s no such thing as “my spirituality”?

What if Goddess, God, Allah, Christ, Brahman, Tao, Creator—call it what you will—is the ultimate ground of our being, but most of us drink from founts too shallow to carry us like camels through life’s droughts to the next oasis? As the divine voice said early in Jeremiah, “They have forsaken me, the fountain of living water, and dug out cisterns for themselves, cracked cisterns that can hold no water” (2:13).

What if spirituality is not just real, but also requires opening ourselves to a realm of mystery that goes beyond our individuality? What if divine love is the innermost fount? What if we are to be, as Peter’s epistle puts it, “participants in the divine nature” (2 Peter 1:4)?

The Psalms said and Jesus echoed, “Ye are gods” (Psalm 82:6; John 10:34). And Hinduism similarly teaches that the Atman, or individual soul, is ultimately Brahman, the divine oversoul of cosmic consciousness. As Saint Athanasius of Alexandria said in a passage that Hindus would recognise as the mahavatar principle and Buddhists would see as the bodhisattva ideal, “Christ became man that we might become as God.”[2] (And let us be careful, if we are of Christian profession, from making our Christ too small in this interfaith age of the One World village.)

In evolutionary terms, we are only 200,000 years old as Homo sapiens sapiens—that perhaps aspirational name that means, “wise, wise humans.” Our planet is only in middle age—peak career. There could be a few more billions of years before the sun expands into a red dwarf. For better or worse, “sustainability” could still be in the early stages of a long innings.

So what does it mean to be human in all this? I suggest that the mystical teachings of world faiths hold that it is to realise our divine unity with that which gives life, and not just any old life, but life as love made manifest.

Perhaps our challenge is to break through the fog, or urbane smog, that lingers like the mist I witnessed that Sunday evening. It was so very beautiful that night as the moon rose high above.

[2] Athanasius, On the Incarnation, 54 (translation mine). The Catechism of the Catholic Church uses a similar version: “For the Son of God became man so that we might become God” (The Vatican, Catechism of the Catholic Church [no. 460], http://www.vatican.va/archive/ccc_css/archive/catechism/p122a3p1.htm). My version simply substitutes “Christ” for “the Son of God,” as that leaves it more open as to how the reader wishes to interpret who Christ was.