The Needle Chase: The Travails of Deer Immunocontraception-on-Hudson 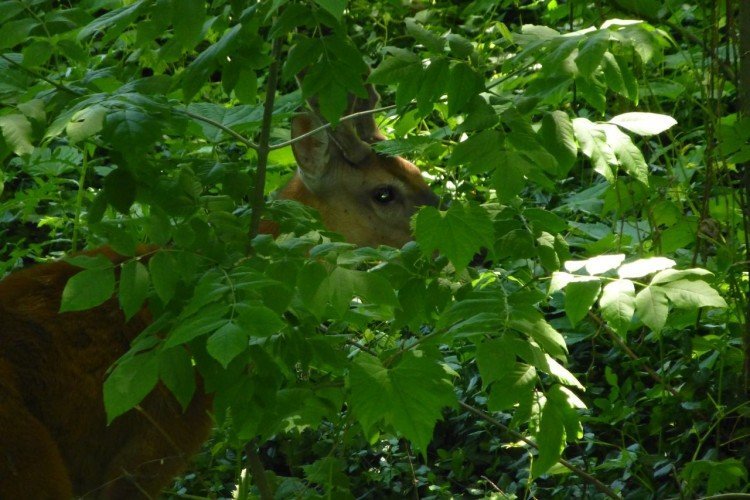 Over a year ago I described how the small village of Hastings-on-Hudson, New York, was planning to respond to the population explosion of white-tailed deer (“Ethics on the Edge,” May 28, 2013). We resolved to control it through contraception rather than culling. Here I would like to share what happened during our first try at locating, capturing, tagging, and inoculating female deer in March 2014. The lessons the deer taught us then were surprising and have shaped our plans for a second effort in 2015. It had taken us almost four years to get the state of New York to cooperate with our plan to pursue a nonlethal approach to deer control. It did not occur to us that it would be nearly as difficult to get the deer themselves to cooperate. Well, guess what. We still have a lot to learn.

In my last post I mentioned the nonchalance the deer of Hastings show when they encounter a human and how their attitude strikes me as a bit rude. Last winter they went one step further and blew us a raspberry, or as we say around here, a “Bronx cheer.” We were keystone cops, with dart delivery “projectors” (not “guns”) in hand, and the deer led us on quite a chase. We and our expert colleagues were surprised by the unusual behavior of the Hastings deer. We had to make adjustments on the run; the ship of our location and darting protocol had to be repaired at sea.

A little background. The growing public concern in Hastings about the growing number of deer and their effects—Lyme disease (more than 100 cases per year), traffic accidents (20 incidents per year), the severe reduction of plant life in gardens and the understory of our parks and woodland areas (an estimated $500,000 in damage)—came to a head  around 2009. For reasons having to do with the ethical and emotional sentiments of the community, plus legal restrictions on hunting with firearms or bows in our densely populated area, we have turned to the use of long-acting immunocontraception as the most feasible and justified way of reducing the birth rate of deer residing in our village. Using heat sensitive cameras and statistical analysis, we have estimated that there are 120-140 deer in the two square mile area of Hastings. 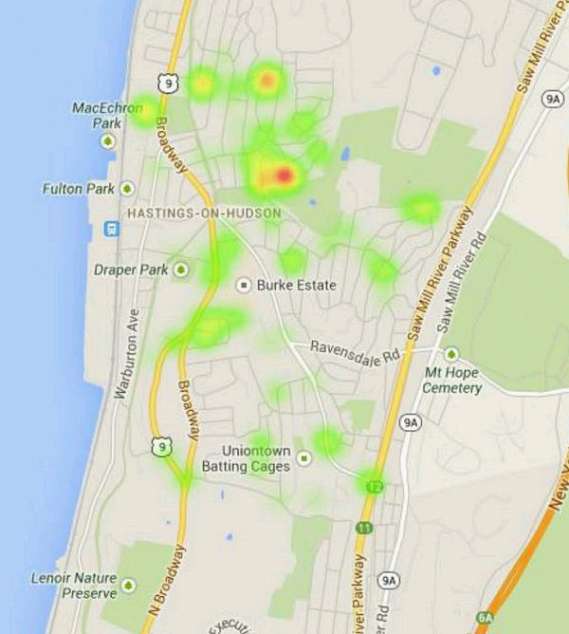 We have reason to think that immunocontraception might work in our area, as it has in other places, but we don’t know for sure, and we won’t know until we see signs of population decrease and biodiversity recovery over the next few years. Our deer control approach is being undertaken as a research project in collaboration with scientists from Tufts University and the Humane Society, who have considerable expertise and experience with immunocontraception. It is worth noting that the growth of scientific knowledge in wildlife management and fertility control is very timely and important because many areas and many species today are affected by the absence of natural predators and by the disruption of ecological integrity caused by certain patterns of human land use. Like much else in the field of conservation biology, this is a science of the concrete: local conditions and variations matter, abstract generalizations do not often apply.

Still, we did begin by generalization. Based on previous experience, we developed a plan that involved two large wooded properties where we knew that sizable groups of deer tend to congregate and where the police could restrict access during the four-week period when the darting and tagging were underway. We obtained mechanical devices known as deer feeding stations. They hold up to 200 pounds of corn and can be set to automatically broadcast it at pre-determined intervals. The assumption was that this will habituate the deer to a particular area and that once they discover the feeder, they will quickly learn its dispensing hours and then show up for the feeding. (Deer are nothing if not observant and resourceful, traits that we in fact underestimated.) Once the deer are accustomed to a feeder dispensing cycle, darting can be arranged around that schedule. 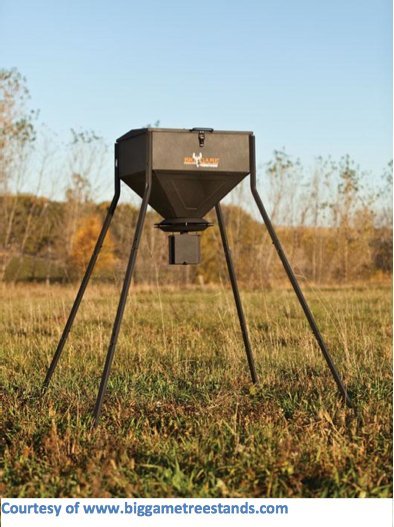 Our protocol, duly approved by the Department of Environmental Conservation of New York state, was to inject a doe with a tranquilizer dart, follow her until she went down, then manually inject her with the contraceptive and tag her ear for future tracking and to indicate that this animal would not have to be re-injected again for two years. (For the booster injection, tranquilizing first will not be necessary; the booster contraceptive can be administered directly by a dart at a distance.) Simple. In four weeks, we figured, two trained darters would be able to tag and treat maybe 25-30 does. That would be a good first year.

But it had been a particularly harsh winter in Hastings. A few deep snowfalls punctuated by long days of very cold temperatures hardened the surface of the snow on the ground to an icy pack. There are steep slopes in many yards and in the wooded areas where the deer congregate and browse. Vegetation was hard to uncover; footing was treacherous, for hoof as well as for boot. One local resident who observed many of the deer last winter thought that a number of them were limping and had various leg or muscle injuries due to the ground conditions. From December on, the winter seemed to stress our herd; I know it did me. By March when our field work began, they were unusually skittish—much more so than the Humane Society field researchers had encountered when working with deer in other locations.

A science of the concrete. What happened was that several of our assumptions were confounded by the deer behavior that we encountered. Our plan to have fixed feeding stations and to lure the deer into a discrete area did not work well. The deer simply were not where we thought they would be in large numbers. Instead they were moving around the village, foraging in various yards on private property. Our darting team had to hit the road. Some people who saw several deer in their residential neighborhood tried to call in, but by the time the darters could arrive, the deer were gone. And responding to calls in that fashion was not viable; it just drove our darters from pillar to post.

So the darters tried to cruise the village looking for deer, and they would stop and get out and try to hit one with a tranquilizer dart. But again, the deer in March were nervous, wary, easily spooked. The darting team found it difficult to even approach them without prompting them to run away. In one of his periodic email updates to village residents, Hastings Mayor Peter Swiderski put it succinctly, “It probably should have come as no surprise that wild animals behave wildly and don’t necessarily line up cooperative to be darted in their rears.” We had thought that anyone could easily come within 20 or 30 feet of our deer without causing more than a glance over the shoulder or, at most, a hard stare. A homeowner, armed with only pruning shears, who was well-known to the deer in her garden, could do so; but not our darters, strangers with strange objects in their hands.

It was not pretty. Here is an interesting twist. One needs the permission of a private property owner to shoot a dart into his or her lawn, and the permission of several owners to follow a darted deer across various lawns before the tranquilizer takes effect and then do the contraceptive injection and ear tagging wherever it falls. The tranquilizer guns have a very short range, and the dart would not seriously injure a person; but nonetheless in Village Hall the word “liability” was heard, a much more effective paralytic than the tranquilizers being used on the deer. This was not the orderly and controlled situation that either the researchers or the elected officials of the village government had anticipated. We put out calls for people to sign permission forms for entry to their yards, and got a reasonable response, but it was all simply too complicated, as Yogi Berra might say.

What lessons did we learn? We thought that the deer would come to our corn. Instead we had to go to them as they foraged over icy ground. We thought that we could pursue and contain the deer in an area we controlled. Instead we found ourselves faced with pursuit under very different conditions. We thought that we would surprise the deer and save them from themselves, or at least from one ultimately destructive consequence of their natural sexual behavior. They surprised us, and forced us back to the drawing board of our natural behavior—planning, scheming, learning from our mistakes, trying again. 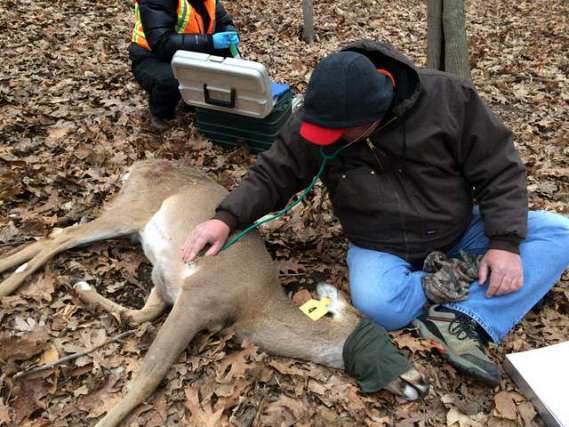 When the field team packed up their equipment and left town, we had darted and tagged a total of seven deer. Last summer, in defiance of the odds, I saw a doe sporting a large ear tag sauntering along the road.

How will our plan be different next winter? We will attempt to bring the deer to our contraceptives with feeders again, but we will do so in a way that is more effective by increasing the number of feeding stations and by beginning earlier, well before the darters arrive in town, to give the deer more time to become acclimated to the feeding schedule.

In addition to that, however, we will also be ready to chase the deer with our needles. There will be more boots and, one hopes, less ice on the ground. The team of darters next March will substantially increase, to at least four or more instead of two, and they will operate for a longer period of time, perhaps as long as eight weeks. This fall we are also getting ready for the need to interact with deer on private property. We are undertaking a permission and consent process with property owners in the community that will target neighborhoods where we anticipate large concentrations of deer will be active. This will simplify the logistics of the darting, injecting, and tagging process considerably.