The Phenomenon of Humanity

A few years ago I read The Phenomenon of Man, by Pierre Teilhard de Chardin, and was amazed by its current relevance. Teilhard was a Jesuit Priest and famed paleontologist at a time when science was regarded as a suitable path to God. Teilhard’s path was too radical for the Catholic Church, however, and his best-known work was not published until after his death in 1955. Over the decades, Teilhard was largely forgotten as a scientist but remained widely read for his spiritual quality. What did I, a practicing evolutionary scientist, find so relevant about his work?

Teilhard wrote that humans are both a biological species and a new evolutionary process. As a biological species, we are little different from our primate cousins, and there was no divine spark in our origin (this did not play well with the Catholic Church!). As a new evolutionary process, however, our origin was almost as momentous as the origin of life. Teilhard called the human-created world the noosphere, which slowly spread like a skin over the planet, like the biological skin (the biosphere) that preceded it. He imagined “grains of thought” coalescing at ever-larger scales until they became a single global consciousness that he called the Omega Point.

I tell Teilhard’s story in a chapter of my book The Neighborhood Project titled “We Are Now Entering the Noosphere,” where I also say that reading his book was like the strings of a musical instrument resonating to the strings of another instrument being played nearby. Teilhard anticipated, far ahead of his time, the concept of an evolutionary process built by evolution. Today, this concept is sometimes called a “Darwin Machine,” and it is described with great clarity in a book titled Evolution in Four Dimensions, by Eva Jablonka and Miriam Lamb. They remind us that Darwin’s theory of natural selection requires heredity, not genes. Genes constitute one mechanism of heredity. Genes as we know them were not the starting point of evolution; before genes there was evolution without replicators. Genes, in turn, produced other mechanisms of heredity, including epigenetic mechanisms (involving the expression of genes), learning mechanisms, and systems of symbolic thought that are trans-generational. The second (epigenetics) and third (learning) dimensions of evolution exist for many species, but the fourth (symbolic thought) is nearly uniquely human. Moreover, the symbolic inheritance system rivals genetic inheritance for its combinatorial diversity. There are nearly an infinite number of genotypes in a sexually reproducing species, each potentially producing a different phenotype for natural selection to act upon. Similarly, the diversity of imagined worlds is nearly infinite, and each “symbotype” potentially motivates a different suite of actions in the real world for natural selection to act upon. Thanks to this combinatorial diversity, our ancestors spread over the planet, adapting to all climatic zones and hundreds of ecological niches, displacing countless biological species along the way, for better or for worse. Culturally, we are more like an entire adaptive radiation, similar to the dinosaurs, birds, and mammals, than a single biological species.

Teilhard also anticipated the concept of multilevel selection, which happens to be my academic specialty. Traits that are “for the good of the group” seldom maximize relative fitness within the group and therefore require a process of between-group selection to evolve. When between-group selection becomes very strong compared to within-group selection, a species becomes ultra-social, which is jargon for “very, very cooperative.” Social insect colonies are the classic example of ultra-sociality (also called eusociality, especially when there is a reproductive division of labor). One of the greatest discoveries in the history of evolutionary thought (due to Lynn Margulis in the 1970s) is that nucleated cells are ultra-social groups of bacteria. This is something that Darwin never imagined! Multi-cellular organisms are ultra-social groups of nucleated cells. The concepts of “organism” and “highly cooperative society” have literally become one and the same. 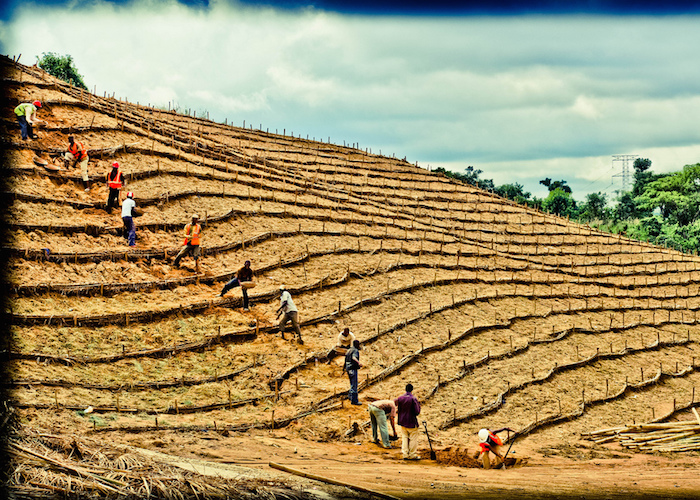 Only during the last decade have evolutionists begun to realize that we are an ultra-social primate species and that this accounts for virtually all of the differences that set us apart from our primate cousins. Mechanisms evolved in our ancestors that suppressed the ability of individuals to succeed at the expense of members of their own group, causing succeeding as a group to become the primary evolutionary force. We are designed to be team players in ways that penetrate so deeply into our subconscious that we are only beginning to understand the proximate mechanisms, even though we play them out every moment of our lives.

For thousands of generations, the ultra-social groups were small groups—what Teilhard called “grains of thought.” Then, with the advent of agriculture, cultural group selection increased the scale of human society by many orders of magnitude, resulting in the mega-societies of today. It is important not to romanticize the increasing scale of society—it was due largely to the carnage of warfare. In addition, most people will probably always feel most at home in small groups. It is part of our genetic heritage. If society must exist at a large scale, let it be multi-cellular. Finally, the mega-societies of today must become still larger to solve our largest and most recalcitrant problems at a planetary scale. We have not yet reached the Omega Point.

In deference to new-age sensibilities, let’s call the updated version of the Phenomenon of Man the Phenomenon of Humanity. What does it auger for the future? For one, I look forward to a coalescing of academic disciplines, especially those that have been divided in the past on issues such as genetic determinism and social constructivism. Our capacity for open-ended change, which is so often conceptualized as outside the orbit of evolution, is far better understood as an elaborate product of genetic evolution and an evolutionary process in its own right. When the study of humanity (life? all academic disciplines?) becomes conceptually unified in the same way as the study of the biological sciences, we will have reached an intellectual Omega Point of sorts.

Becoming an ultra-social species at the planetary scale—another kind of Omega Point—will be much more difficult, although theoretically possible. The first step is for everyone to realize that it will not happen spontaneously. Insofar as Teilhard portrayed the Omega Point as inevitable, that is the biggest thing that he got wrong. Dozens of contemporary theorists speculate about the global brain emerging spontaneously from the Internet, as if complexity and inter-connectivity are the only necessary ingredients. That’s wrong, and the sooner we reach a consensus on this point the better. Multi-level selection states very clearly that adaptation at level X requires a process of selection at that level and tends to be undermined by selection at lower levels. We can’t expect natural selection to operate at the scales required to solve our largest and most recalcitrant problems, so the only alternative is policy selection. Call it social engineering or stewardship, it is up to us to turn the earth into the super-organism that Teilhard had in mind. We will not succeed without a sophisticated knowledge of our species as a product of genetic evolution and a process of evolution in our own right.