Tucked away beside an industrial area of Hunts Point in the South Bronx, Barretto Point Park, which officially opened in 2006, still dazzles some who helped to transform the six acres into a place of a beauty, peace, and recreation. “It is a gem!” exclaims urban planner Ann Buttenwieser, who was the driving force behind the park’s famous “Floating Pool Lady,” the 80 by 260 foot barge-swimming pool that is open during the summer. “What is nice is the combination—you’ve got the fishing pier, you’ve got the floating pool, and you’ve got the park,” says Buttenwieser. She recalls that in 2014 she “got notice from the parks department that we had more users [that] summer than any other intermediate pools in the Bronx.”

While the area was frequented before the park was built, it was not safe and family-friendly. Rachelle Fernandez, the fiscal officer of THE POINT, the Hunts Point community development organization that campaigned for Barretto Point Park, lives and grew up in the neighborhood, and she explains that while Hunts Point is a peninsula, due to “the overgrowth, empty lots, and unsafe and unsanitary conditions,” the waterfront could not be enjoyed by the neighborhood. “The need was to have safer, green space by the waterfront,” Fernandez says.

While a fertilizer manufacturer that fouled the air was shut down because of park users’ protestations, there is plenty of industry still around—and that is part of the allure of Barretto Point Park. According to Lipson, industrial areas that have green parks are usually transitioning to solidly residential neighborhoods. “This is not in transition,” says Lipson. “This is really long-term industrial land—you know, the zoning is M2 and M3; it is heavy industry, it is warehousing it is distribution, so it is very, very unusual.”

Buttenwieser agrees and feels that the Floating Pool Lady’s linkage to Barretto Point Park “is perfect.” She says that when she organized a foundation to build a floating urban pool, her charter “actually said it was to go to recreationally underserved communities.” Buttenwieser points out that while the East River and Hudson restored waterfronts are very nice, industry has packed up and gone. “But here it is, this last community where I have seen kids in their flip-flops walking past . . . fish processing plants, I mean, to get to this pool,” says Buttenwieser. “And that is fabulous for me . . . this combination.” 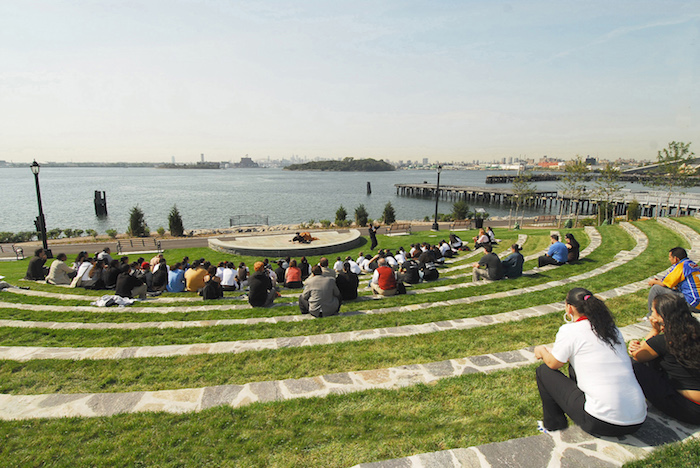 The landscaping of Barretto Point Park is also unique—“softscape” as Lipson describes it—and features the Tiffany Street Pier; the moored Floating Pool Lady; paddleball, volley ball, and other sporting stops; native species plantings; a little sandy redoubt on the water; a rolling expanse of green lawn; and an open granite and grass amphitheater, with the park opening up to a view of the waterway and North and South Brother Islands with the Manhattan Skyline behind them. Placards explain that the two islands have a lot of history and nature to them. For example, in June 1904 the General Slocum tour boat grounded in flames at North Brother Island. The accident caused over one thousand deaths. South Brother Island, now a wildlife refuge, was once owned by New York Yankees owner Jacob Ruppert, Jr., who acquired Babe Ruth for the team. As the story—or fable—goes, Ruth would visit South Brother Island to practice his swing, hitting baseballs into the East River.

New York City Park chief landscape architect Ricardo Hinkle led the design and construction of the park, which involved many specialists and much community input. At this former brownfield site, once known to the Weeckguasgeeck people as Quinnahung or “long, high place,” the design recreated a rolling landscape. The overall effect is to bring people to the water. “Riccardo designed this with a ‘viewshed’ in mind,” says Lipson, “and the viewshed isn’t just about the Manhattan skyline—it could have been, but it does perfectly frame the Islands, too.”

Buttenwieser also developed the Floating Pool Lady to evoke history: in the late nineteenth and early twentieth century barges were used for public bathing for tenement residents, but they evolved also into swimming centers, with swimming lessons offered. In the 1880s there were fifteen barges in operation in the 1880s. “As far as a part of New York City life, they were absolutely crucial because they were placed in the tenement house districts, so you had the lower east side, the south Bronx, you had Hell’s Kitchen, . . . places where the people living in the tenements had no running water and no bathing facilities,” Buttenwieser explains. But young people especially took to the fun and recreation the barges offered she adds. In 1935 Robert Moses replaced the remaining barges with in-ground pools.

Greenery and waters all about—this makes Barretto Point special. “Something about water, it is so therapeutic.” Fernandez reflects. “And to be able to access it and enjoy it from different spots in the city, I think, is real important just for general well-being and good health and good mental state of mind.”