The Wildness of Being

Our indoor cat bangs on the closed blinds. Then stops. Seconds later she starts again and manages to open them by pulling the cord with her paws.

Is she hungry? No. She’s already had a midnight snack of dry food.

She wants to bird. 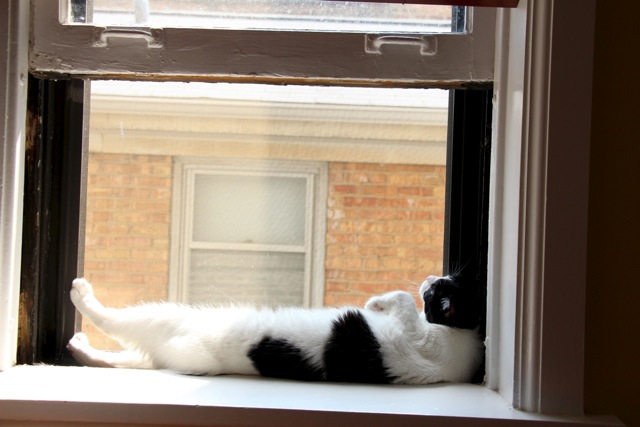 Having grown up along the southwestern shore of Lake Michigan, I think of myself as a beach girl. Someone who understands water and sand. An adventurer who would swim past a buoy on a dare. Who would trek out onto the frozen lake. Who carries the words undertow, sandbar, and alewives as muscle memory.

But I cannot say I fully embraced wildness until I became a gardener in the city, in a landscape where close quarters is an understatement. Where a street could be filled with a strip of century-old brick three flats—just space between them for a concrete gangway.

Chicago. North side. In the 1850s Swedish immigrants farmed here.

If the garden is a refuge for me—a condition of safety—then what is it for the birds? Or the visiting cat? The occasional opossum? The one-eyed squirrel? An owl, even?

American gold and house finches cling to a tubular feeder hanging from our lilac tree.

In the winter, dark-eyed juncos forage on the nyger seed remnants beneath.

When my partner and I moved into this five-unit condo building, we were thrilled to see the double-lot backyard. Fifteen years prior, it had been a concrete parking area until our neighbors got tired of shoveling out their cars and built garages. This opened the possibility for green space, for a garden.

Across the hall, our neighbor, a research librarian, had spearheaded the plan and suggested buying trees: two Lilacs, one Hawthorn, a Juniper, a Katsura and River Birch.

Sod was an afterthought; I know she would have preferred ground cover, a word I did not know then.

Early morning: the starlings mimic the song of a bird I do not recognize.

What is the deciding factor for the location of a nest? A starling usurps a sparrow’s nest inside a cable box anchored to our brick wall. They do not know I know this. But I do not know what they know.

Once, while mulching, I heard scratching from above. Ah, it’s the birch shedding its papery bark. The wind is blowing. Waves at the beach.

Having relocated to the brick vents on the east and west sides of the building, the sparrows have expanded their nests, their families. Early morning they perch on a neighbor’s gutter.

I live in an urban countryside.

One night, not too long after we had settled into our new place, our neighbor knocked on the door. She startled us with her seriousness, announcing she and her husband were moving. Buying a two-flat of their own. Her request, a plea:

At the time, I knew absolutely nothing about gardening. I had heard the words deciduous, perennial, and bulb, but they were not my words. I was a beach girl.

Before she left, we made a portfolio identifying all the perennial plants and shrubs in the garden. She gave me many tips on what to do, but still I was afraid to prune and deadhead. My knowledge of weeds = null.

On St. Patrick’s Day, she said, wrangle the roses. That way you’ll get more blooms.

The peonies need hoops, stakes for the irises, and iron for the river birch. The last piece of offhand advice she gave to me:

A garden is resilient. Make mistakes. It will come back.

Early morning, our cat bats the shades to see what she hears: two cardinals whistling long–long–short-short-short-short-short-short notes. In my half-awake state, I silently try to replicate their call and response. What brings us together in nature is our nature. It explains the bags of thistle seed left anonymously at our front gate; the gift of a mixed seed wreath attached to the miniature fence around the Linden tree; the teenage babysitter upstairs who discovered a pigeon’s egg, held the warm orb in her hand, proclaiming she would take it home and raise it. We want to propagate beauty. 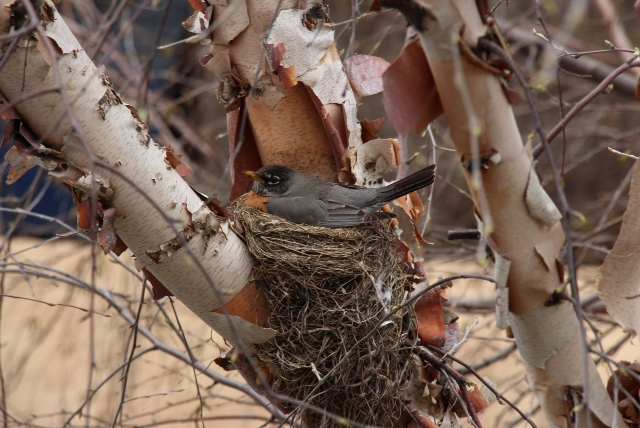 For many days the robin clots mud in her bill to line the bowl of her nest, and does so with her breast. She wedges the nest deeper into the collar of a birch branch.

When I tell my neighbors about the robin’s blue eggs, I say, Don’t look up! The crow watches us watch.

She sits on her eggs in the rain.

Late afternoon: the robin bathes in wild abandon, flapping her wings for a good two minutes. A male robin lands on the garage roof. He cannot turn away a crow.

You are mistaken to imagine anything differently.

The crow devours its catch; the action complete within the span of focusing my camera. 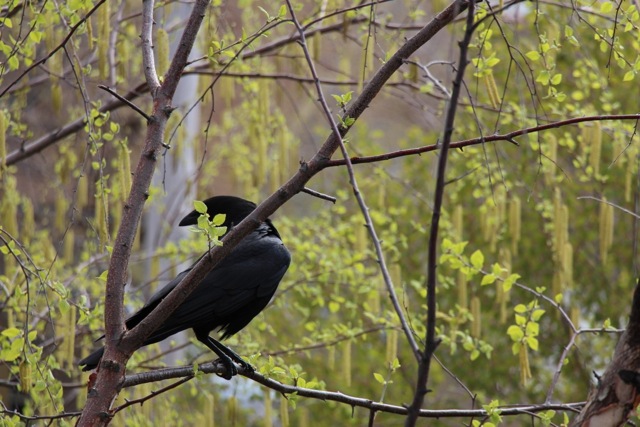 I live in a neighborhood that was once a cherry orchard. Despite the fact that our boundaries are determined by fences and alley gates, it is birds that connect us.

We shout to each other from our Chicago-style vertical wooden back porches:

The hummingbirds have returned.

We overhear conversations through window screens.

My refuge provides me the wildness of being myself.

All photographs by Mary Cross.