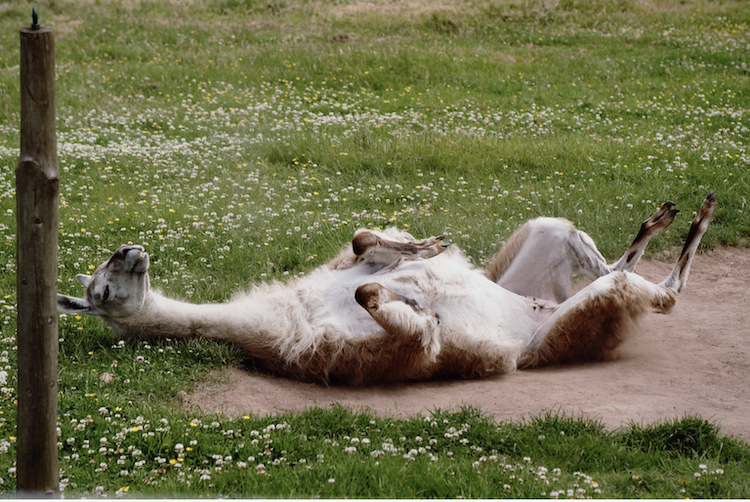 When I heard therapy llamas would be visiting my local bookstore in San Francisco, I made a beeline for the store that Saturday. I joined a long line of adults and children eager to meet them in the courtyard of BookShop West Portal, in a village-like neighborhood with just one main commercial street. The reason for the lengthy line was plain: While urban bookstores hold frequent author events, llamas are never among those featured.

But these weren’t just any llamas: the cuddly camelids at the bookstore were known for having comforted students during final exams at the University of California at Berkeley, and for visiting campus during Suicide Awareness Week, becoming the recipients of student hugs and stroking in order to ease school-related stress. Trained in animal-assisted intervention, skilled in the art of providing gentle communion, they’ve also worked their magic in Oakland at Redwood Park, Stanford University, San Jose State, UC Davis, plus Bay Area nursing homes and schools.

Soon, I was stroking three llamas and learning about their different personalities. Owner George Caldwell drove them to the City by the Bay from his llama farm in the Sierra foothills, Llamas at Circle Home. He’s brought his llamas to meet the public since 1983, teaching them to keep eye contact with people by having the llamas pluck carrots from people’s teeth.

Tambo is “a thinker. He thinks very highly of himself, and knows he is very handsome. Within five minutes of his birth, Tambo stood up magnificently with his white head coat and jet black body coat. It was like he proclaimed, ‘The gift has arrived!’ He knows how to make people feel good by showing concern and acknowledging to them that he is Llama Royalty.”

Meanwhile, Mystical Amigo is “very Zen, soft and loves hugs. He’s thoughtful, considerate, mystical and is beginning to understand his powers, learning more about them every day. He’s smart, proud, and thinks he runs the group of 16 llamas he runs with. A beautiful short-wooled llama who represents the working-class llama well, and the oldest of the 11 young llamas, he’ll be 5 in mid-June.”

As for Quinoa: “He thinks about two things: food and llama girls. Very tolerant and assured, he can handle any situation. Quinoa’s always in a good mood, and game for anything as long as the food is good. Now the elder statesman, he taught the young ones it was safe to go with me to all the places I’ve taken them.”

When I told him I thought I preferred alpacas, who seemed sweeter, gentler and smaller, Caldwell snorted.

Caldwell has been bringing llamas to UC Berkeley, that small East Bay city of about 100,000, for six years. “Everyone who even sees them goes away with a smile, joy, and a sense of well-being.” One student told him llamas were the best part of his college experience at Berkeley. At Sonora Regional Medical Center, near his farm, a nurse once told him she had never heard one particular patient speak before she heard him talking to and petting a llama.

Llamas were called “our speechless brothers” by ancient Andeans in South America, revered as hardworking, strong, and intelligent, the providers of transportation and hauling, and connected to humans for thousands of years. In Chile a few years ago, in the Atacama desert in its north, I heard of a local legend that said a llama in the sky prevented the world from flooding each day by thoughtfully drinking water from a celestial river every night.

The legend reminded me of what I learned at an Atacama observatory: While the ancient Romans and Greeks saw Orion the hunter, bulls, and archers in the night sky, ancient indigenous Andeans saw llamas, toads, partridges, serpents, and foxes. When they looked at the Milky Way, they saw its black void shaped like a llama, whose eyes were the two brightest stars in the Southern Hemisphere, Alpha Centauri and Beta Centauri. When no moon or clouds were out, they spotted her baby llama stretching up her neck.

It’s a lesson I’ll never forget, and not just about cultural relativism: Our perceptions are truly shaped by our experience. You “see” what you’ve seen before—what’s part of your daily life dominates your imagination. You won’t “see” or interpret something in a certain way unless you’re familiar with it.

In San Francisco, I learned how to greet Caldwell’s llamas: Put your nose next to the llama’s nose, and gently exhale. On a visit to Hawaii last year, when our tour group was taught the traditional native Hawaiian greeting in Molokai, pressing your nose to the nose of a person and exhaling together, I experienced goosebumps of deja vu: I’d already done it with llamas.

In these shelter-in-place times, Caldwell’s llamas rose to the challenge: In late April, to kick off Mental Health Awareness Month in May, UC Davis live-streamed his llamas for nearly two hours because school was closed.

The benefits of touching and interacting with a soft, fluffy, gentle, calm and non-judgmental animal are many. Dogs and other animals in animal-assisted therapy can help reduce depression, anxiety, fatigue, and even pain for people of all ages and conditions, as well as bring comfort and delight, says the esteemed Mayo Clinic. In the Portland area, since 2007 when they were certified in animal-assisted therapy, Mountain Peaks Therapy Llamas & Alpacas have made about three hundred visits a year to local nursing homes, schools, and facilities for special-needs and at-risk children. Mother-daughter duo Lori Gregory and Shannon Joy began with Rojo, a majestic reddish-brown llama with an unusually winning personality, then added Napoleon, an alpaca, and others to their farm. The sheer delight on the faces of young and old they met and charmed is evident here.

I’ve had other camelid encounters. My first effort met with failure: I once drove to a llama B&B in Connecticut and politely asked to see the llamas. “Do you have an appointment?” the inn owner asked. Er, no. I didn’t realize one was required. Permission denied: Her llamas were busy (or, perhaps, just getting their beauty sleep or resting up between appointments in their hectic social calendar). No llama sightings—but I did glimpse a copy of Llama Life on the kitchen counter, a kind of Town & Country glossy with a cover photo of a glamorous, long-lashed llama. I wondered, since llamas rarely grant interviews, what filled its pages month after month. Hustled out the door, I never got the chance to find out.

In Washington State, on San Juan Island, an artsy evergreen island home to 7,500 people near Canada, I visited an alpaca farm, Krystal Acres, where 11 babies born in one year were, remarkably, named after cars, like Mercedes, Royce, and Bentley. Its shop sold scarves and mitts knit from their soft fleece.

I cradled a cuddly Canadian camelid baby in my arms at Camelot Haven, an alpaca farm outside Vernon, in British Columbia, and hiked with an adult alpaca overlooking a lake at this farm in the Okanagan Valley. In Chile, near Santiago, the capital, I met alpacas at wineries like Matetic Vineyards, where they serve as the resident lawn-mowers to eat the grass.

Still, there’s nothing like llamas on city streets, a mile from my house, visiting to celebrate the publication of a children’s book, Llama Llama Loves to Read. Everyone, adults and children alike, were as captivated as the ancient Andeans.