I Thought Ladybugs Would be Easy 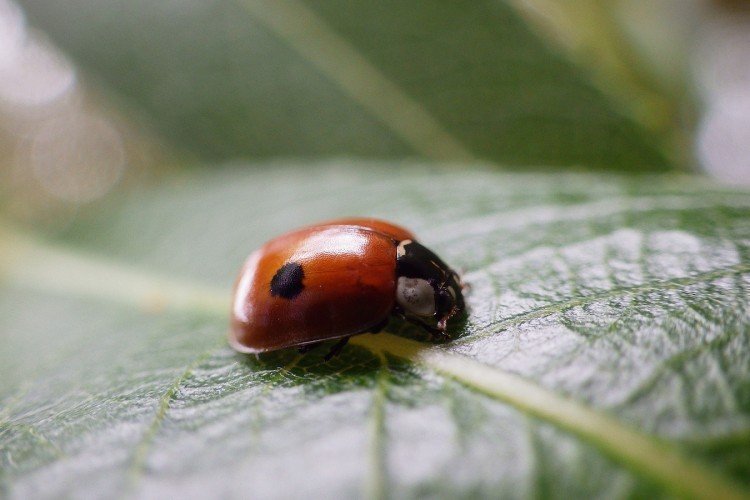 The Two-spotted Ladybug (Adalia bipunctata) is characteristically named. Most specimens have a black spot on each of their glossy red elytra, the modified beetle wings that act as protective covers for their delicate inner wings. A smaller proportion of the species are melanistic variations, black-bodied with red spots and rectangles. That makes them look quite different. But that’s ladybug identification for you, not nearly as easy as some field guides suggest with their single photograph. Sometimes the only way to tell your ladybugs apart is the distinctive, and tiny, pattern of the head. 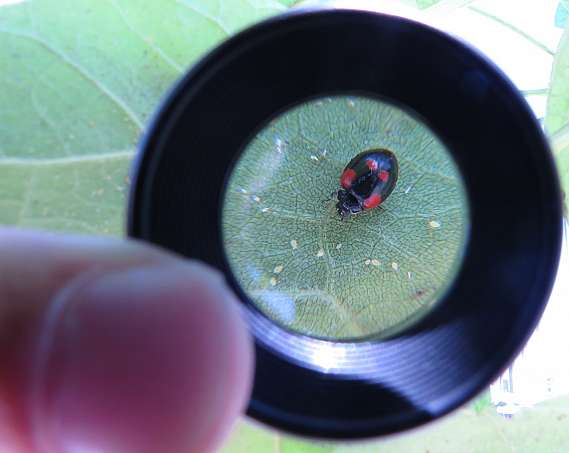 Or to check with the experts. I submitted pictures of these shiny beetles to Cornell’s Lost Ladybug Project when I found them on some Catalpa trees in New York City’s Brooklyn Bridge Park in 2012. Lost Ladybug is a citizen science survey looking into the dropping numbers and/or vanishing of some species of native ladybugs in the United States. Everything I’d submitted previously was an introduced species from the West Coast or Eurasia—the Multicolored Asian Ladybeetle, for instance, with its various colors and spot patterns, is the most common ladybug here in New York City. It carries a parasite that has been disastrous for other ladybug species. Most of these ladybugs were introduced intentionally by governments, pest-control companies, commercial greenhouses, and gardeners to combat pests.

I became interested in insects during a couple of Augusts. Birds were my gateway drug to the natural world, but in August—post-breeding, pre-migration—the birds are quiet and elusive. It seemed sort of, well, natural, that my curiosity about the expansive, ever-fresh subject of natural history should be stimulated by other flying creatures, not to mention the crawlers, jumpers, and web-spinners. When you start looking at the insects, you quickly realize why biologists specialize: the arthropods are exuberantly overwhelming. I thought ladybugs would be easy….

I believed that my discovery was in fact A. bipunctata and the folks at Lost Ladybug confirmed it. They also let me know Brooklyn was one of only three locations in New York state to have reported them (and the first with the black variation). It wasn’t the Nine-spotted Ladybug, the official NY state insect missing from surveys for years before the 2011 discovery of some on the eastern end of Long Island. But still, here was a small population of a now rare insect, in Brooklyn, on the harbor, amid a handful of trees, in a brand new park. 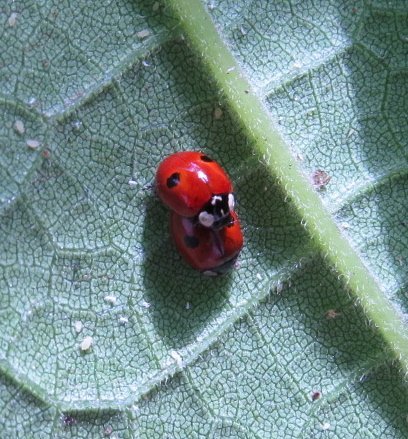 It may be said that if we build it, they will come. We humans now have the ability to determine the make-up of natural environments, indeed the very planet. It’s a frightening power; we must use it wisely. Sometimes, as George Monbiot argues in Feral, that means leaving things alone. But when it comes to smaller-scale decisions, such as park or garden design, the best argument is to nurture native flowers, shrubs, and trees, which attract dozens of species of insects that feed off the flowers and pollinate them. In turn, some of these provide food for other insects and other animals who are well-suited to local habitats.

The trees seem to hold the secret of the Two-spotted’s presence. Both species of Catalpa (C. speciosa and C. bignonioides) grow in the park. The Two-spotted are found almost exclusively on the shady underside of the trees’ big heart-shaped leaves. There were just three of these trees on a little rocky rise at the base of the Park’s Pier 2, which is where I initially found the beetles. The Catalpa leaves were sticky with aphid dew, the undersides dotted in tiny white spots. Aphids are like straws, sucking food from leaves and stems at pressure; waste product has to emerge from the other end or the things will explode. This euphemistic “honey dew” is rich in sugars and favored by ants, wasps, and other creatures, while the aphids themselves are ladybug food. Ladybugs are famous as aphid-eaters, which is why we are awash in non-native species. It’s still possible to buy packages of ladybugs as “natural” pest controls, but, disregarding the disease that they can spread, they’re of limited value, since they can fly away from your patch any time they want. Some are quite cheap, but note how the species isn’t specified on the package, or where they originate. I’d recommend against it. Instead, learn how to tempt local ladybugs to your garden.

Brooklyn Bridge Park has made an effort to plant native species, let nature take its course, and not use pesticides. Sometimes this isn’t very aesthetically pleasing: aphid infestations of Catalpas are frankly gross, the sticky leaves ending up curled and blackened. But without Catalpas, it seems doubtful that the Two-spotted would be here at all. The exotic Paulownia (P. tomentosa) trees also have large, heart-shaped leaves and are found in the park, a legacy of the area’s years of neglect as an abandoned port facility. There are no aphids on those, and thus no ladybugs. 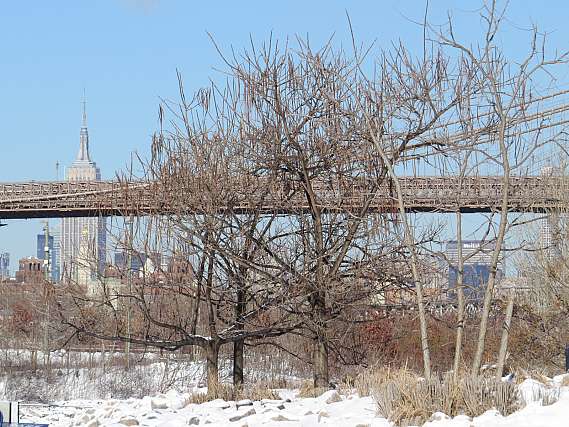 In 2013, the tiny Pier 2 copse was off-limits due to construction. But last year, I got to return to the rocky spot. The ladies were still there. So I started looking at all the Catalpas in the Park. Pier 6 has a dozen of them. These were also hosting the handsome little beetles. The piers between 2 and 6 had been relandscaped, with several Catalpas in the mix of trees. Last summer, pretty much every one of these showed some evidence of them. The Two-spotted ladybug’s whole life cycle takes place on the Catalpas: little clusters of eggs; the progressively larger instars, or stages, of the nymphs (which look like tiny, ferocious alligators); the pupae; and the adult ladybugs. True to form, the adults start the process all over again. This past year, they were mating well into the fall. 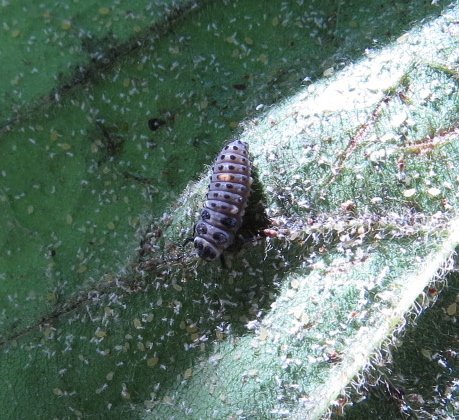 This has been a very cold winter, but last year’s deep freeze didn’t keep the ladybugs from returning so it seems unlikely that this one will. I can’t wait to see them this summer. These tiny, beautiful creatures, so determinedly going about their business as a city roars around them, inspire and amaze me. Hardly anybody knows they’re there. That’s a good thing: they may do better being left alone. But it’s also a bad thing: we should be celebrating the life around us, its tenacity in the harsh environment of the city, and recognize that nature is wherever you look, even on the underside of a sticky-looking leaf. 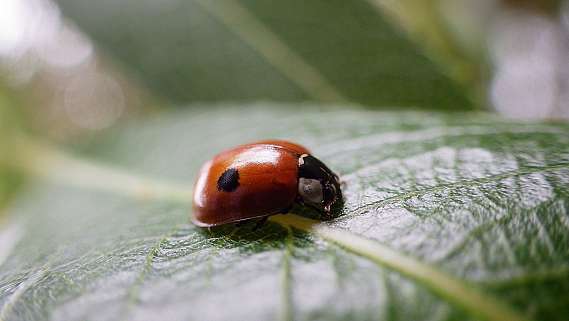