On Being Human in a More-Than-Human World

I have fallen in love outward.
—Robinson Jeffers, “The Tower Beyond Tragedy”

Over the last two decades, as I’ve spoken with students and addressed diverse audiences regarding our human interchange with the rest of animate life, I’ve most often been challenged (and questioned) in the following manner: “Alright, Dr. Abram, I understand when you say that we humans are completely embedded within a more-than-human world, and I understand your claim that many other animals, plants, and landforms are at least as necessary as humans are to the ongoing flourishing of the biosphere. But despite the attention and praise that you bestow upon other species, surely you must admit that humankind is something utterly unique in the earthly world?”

In the early days I found the question mildly interesting, since I had never said our species was not unique. “Of course we humans are mightily special,” I would counter. “Our opposable thumbs, our ability to balance and ambulate on our hind legs, our capacity for reflection, and our slyness with tools and ever-more-complex technologies entail that we are a pretty unique bunch. But then again, that hawk soaring overhead is able to fly without any of the contrivances that we depend upon, and the apple tree over there is able to squeeze apples directly out of its limbs, which in itself is pretty damn unique, and a far cry from anything that I can muster with my own body.

Perhaps you could say that the compelling stories we two-leggeds regularly concoct could be called an efflorescence, or even a kind of fruit, like those apples. But still, the way that some whales dive to a depth of six thousand feet, holding their breath for over ninety minutes, seems another kind of astonishment, as is the journey of monarch butterflies. After overwintering in a small cluster of conifers in the Mexican highlands, the monarchs navigate their way north across the Gulf of Mexico. The progeny of these northward-aimed butterflies then nourish themselves as caterpillars, and after emerging from pupae as newly winged creatures, they continue the migration north. Then their progeny continue the journey, as do the next generation, before arriving at the very same clump of milkweed and clover in the northeast where their great-grandparents hatched from eggs the year before, although none of the three intervening generations has ever seen or tasted or visited those northern climes before!

I am dazzled, yes, by the creativity of the human mind, but I am also struck dumb by the ability of various aspen groves to maintain and replenish themselves, through their common root system, for eighty thousand years and more. Gadzooks! And by the ability of a spring meadow to utter forth into the mountain air a resplendence of wildflowers, the hue and tone of this complex utterance slowly altering throughout the season. Or by the audacious ability of hummingbirds to fly, um, backwards. Are we humans unique? Sure we are. But so is everyone else around here. 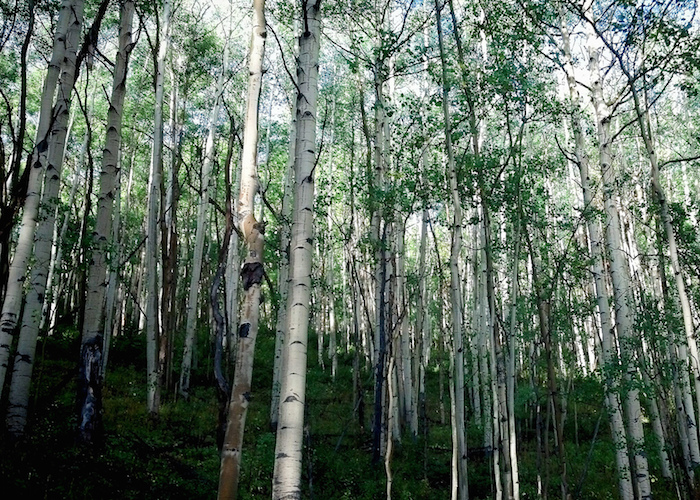 “Hmmm… So each creature is unique, you say. Well all right, sure,” says this bothersome person in the audience. “I can see your point, Abram. The overabundant array of zoological and botanical skills that surround us is indeed remarkable. But really, now, if you maintain that every species is unique, then surely the human species is uniquely unique! I mean, bees with their collective intelligence are pretty cool, and elephants with their ability to communicate over huge distances through infrasound (and, apparently, through the ground itself) seem mighty special. Yet even if I concede that many beings exhibit an array of talents that make them special, surely you’ll have to agree that we humans are specially special.”

There is no getting past such folks. For a while, I wondered whether our perception that humans are so qualitatively different—so diverse and nuanced in our creative and cognitive gifts—had something to do with the simple fact that we, ourselves, are human, and so know our own species from the inside. In other words, we view the other species necessarily only from the outside, so that only their most obvious and generalized traits are apparent, or salient, to us. Encountering other species only as outsiders, we lack the sensorial attunement and insight necessary to perceive the nuanced differentiations that are likely evident to those on the inside—the rich differences, for instance, that a mother bat must hear when, upon returning to the roosting colony, she audibly picks out the call of her child from among the cries of over a million (!) other bats hanging from the walls of the same cave.

Nonetheless, the same question—Are not humans exceptionally exceptional?—kept coming toward me over the years. I found it somewhat tiresome in its predictability, but the persistence of such an apparently simple challenge, and the way it arose again and again in such different audiences, began over the years to wear away at my own stubbornness. Perhaps these critics were right; perhaps there is something utterly uncanny and uniquely unique about our own kind.

And after puzzling and pondering the matter, over and again, sussing out the signature traits of our species, I began to feel my way toward a fresh answer, one that rang true to me even as it seemed to satisfy my challengers—or at least to give them pause. For if there’s something exceptional about us two-leggeds, it seems to reside in our ability to become interested in—even fascinated by—well, pretty much anything. Diverse other creatures, as I watch them go about their days, seem to stay fairly focused on a range of matters that concern their own well-being, indulging in other whims and curiosities now and then, but rarely ranging very far afield, with their sustained attention, from the sort of things that seem to grab others of their kind. But we humans have a peculiar proclivity to become fascinated and enthralled by the most incommensurable matters. Among even my close friends, there’s a person who closely studies the antler patterns of moose, another whose hobby involves documenting the life cycle of various lichens, and another whose expertise lies in throwing and baking the perfect Neapolitan pizza. That same baker is also a fine gardener who spends much of her week wooing various butterflies down from the skies to alight on the plants that she’s carefully cultivated for their delectation. There are people who steep themselves in the long-dead languages of lost cultures, and others who listen in on and try to decipher the long-distance utterances of humpback whales. Still others decline to consider those calls as linguistic, but concentrate their talents on playing music with whale songs, or trading jazz riffs with nightingales and whippoorwills and lyre birds. Some kids collect stamps, others patiently work out the folding patterns needed to render various new brands and models of cars in the ancient art of origami. And other children collect cloud shapes, painting them not in pigments, but in poems.

So perhaps there is, indeed, something uniquely unique about our species. Yet we defy this uniqueness when we strive to assert what is most unique about humankind. Whenever we focus so exclusively upon ourselves, training our attention day after day upon the specialness of our species, then we are no longer enacting the very trait that most exemplifies our humanity. We really display our uniquely human beauty when we cease focusing our gaze upon it and allow our attention to move outward, toward the other shapes of sensitivity and sentience with whom we compose this many-voiced biosphere. Whenever we become intensely engaged by other styles and shapes of life, when we drop away our concern for ourselves and begin to celebrate and praise other beings and elements that exceed our exclusively human concerns, then—paradoxically—we most realize and epitomize our humanity.


The Hebrew word for human—adam—is intimately related to the term adamah, which in Hebrew means “ground” or “earth.” For the ancient Hebrews, to be human was to be an earthling (as in Genesis, where the first human—Adam—is a creature fashioned from the soil who will ultimately return to the soil). In a similar fashion, the English word human is cognate with the English humus (orsoil).Both are derived from the proto-Indo-European root that signifies “earth” or “ground,” which suggests that in English, as in Hebrew, that which most deeply defines the human is our own derivation from (and kinship with) the ground underfoot.

Another term that shares the very same ancestry as human and humus is the word humility: the state of being close to the humus, close to the soil. Such etymologies suggest that, to our ancestors at least, we were most human when we moved in a humble relation to the things around us. Today, in the face of so much earthly devastation wrought by our species—whether through our arrogant self-regard or through our apparent obliviousness to everything else, we would do well to heed the simple evidences carried in our words. An abiding humility in the face of the Earth’s exuberant multiplicity, wildness, and weirdness is, I believe, a necessary quality of our kind and the best possible medicine for what ails us.