For Whom the Toad Calls 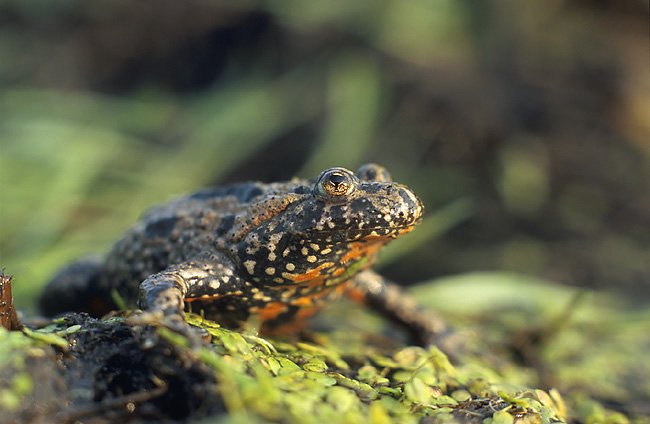 “Pleeeease.” The high-pitched trill of a toad floods the night. Harmonizing with the burbling pond waters, the call proclaims that spring is here, despite cold mid-April temperatures.

I want to go inside and get warm, but he braves the cold of the pond, persistently calling to attract a hoped-for lady love. This fellow’s tireless calling is as surprising as it is haunting.

When I first heard his call several years ago, I wondered what it was. I knew the call was different and unusual for our yard—not an insect, perhaps a frog. I’m not well-versed in frog calls. However, my husband knew the distinctive “Pleeeease” was the call of an American Toad, a puzzling bit of knowledge since we’re far from wetland habitat, amidst blocks of houses in suburban Chicago.

The call clearly was coming from our neighbor’s man-made pond. Could it be that an American Toad had found its way to this little suburban oasis? After some consideration, we thought it unlikely that the toad had come on its own. There isn’t suitable wetland habitat nearby, unless the toad managed to hop a half mile or so, traversing a four-lane road in the process. How did he get here? 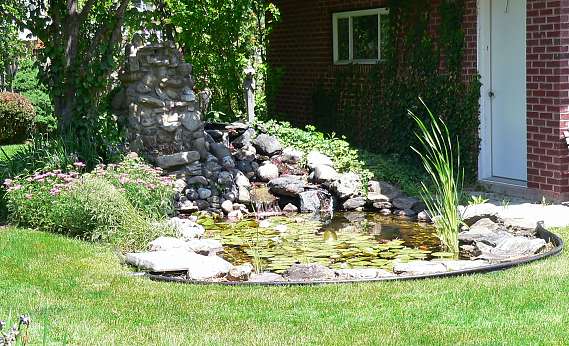 “Pleeeease.” There he is again. We looked for him closely several times, but never were able to pinpoint his location. “Pleeeease” became a hallmark of warm, rainy nights, an audible reminder that a bit of wildness managed to eke out a living in a domesticated back yard. The toad’s presence invigorated me, awakening a deep-rooted longing to live in a wilder environment.

By late summer, the toad had given up. We stopped hearing the hopeful “Pleeeease.” Then came autumn and winter, and another spring. But no toad call emanated from the pond. Had he died over the winter? Or perhaps he had fallen prey to a raccoon, cat, or one of the other nocturnal predators that visited the pond.

The toad’s back! Where had he been for the past four years? Is this the same guy we heard before? So many unanswered questions.

His determined calling prompted conversations between my neighbor and me. We both felt sorry for this little guy; he was all alone. What could we do?

Could we bring in a female? Not a good idea. If they successfully reproduced, my neighbor would have little toads all over her yard and pond. Lawn-mowing day would become dreadful.

Perhaps we could move him to a habitat that has other toads? Again, a bad idea. Some very serious amphibian diseases are spreading throughout the country and world. Introducing a new individual into wild populations is one way these diseases spread. We had no way of knowing if our resident toad carried one of these diseases and decided not to risk it. The consequences of introducing a “Typhoid Mary” toad into a wild population were too awful to chance.

Another cold, snowy winter came and went, and again…

He’s back again this year! I marvel at the adaptations that allow him to survive these winters. He withstands days so cold that, even with a heavy parka and thick gloves, I endure only for brief periods.

But this year is different. His calling is even more persistent. We don’t hear him only on warm, humid nights. He calls and calls, day and night. He calls in the cold.

I hear him as I stand at the kitchen sink, impressed by his volume, depressed by his solitude. Has desperation intensified his calling? 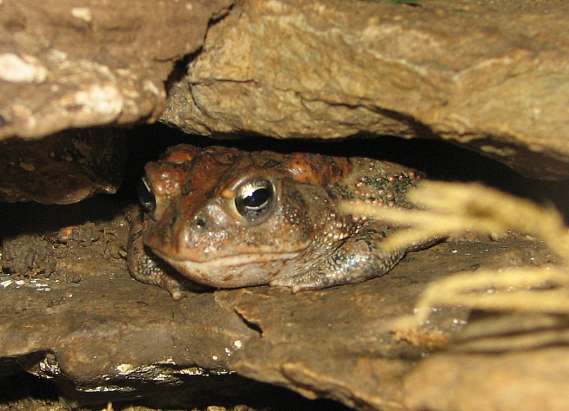 My husband and I talk about how he got here. Did he hitch a ride in with some water lilies? His arrival, like his current pond habitat, was man-made, in all likelihood. While the pond keeps him alive, it’s missing something.

There’s no other toad to respond to his call.

His presence prompts me to think about how many other creatures are intentionally and unintentionally displaced each day. A subdivision here, a mall there. Piece by piece, natural habitats are transformed into human-altered ones, and other forms of life go missing. Some people speak out about this; many others refuse to hear the call.

The toad’s high-pitched “Pleeeease,” “Pleeeease” competes with the radio as I wash dishes. Perhaps he’s telling me I should raise my voice as persistently as he does.

I don’t ask for whom the toad calls; I feel he calls to me.