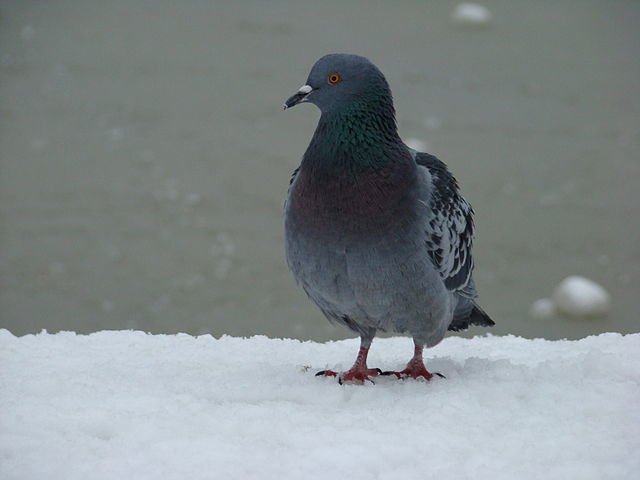 A winter of grief, grief so deep that my body, emotions, thoughts—my whole self—had gone numb: so numb that I would stand on the Clark and Lake “L” platform facing into the cold wind, Chicago’s sharp-taloned Hawk, and let it rake me through and through, welcoming the discomfort. I carried a talisman in my bag, Owls and Other Fantasies by Mary Oliver. I dreamed sometimes of the boy, Kay, pinioned by the snow queen’s shard of glass. Saturday mornings, early, I stood on that platform waiting for the Brown Line train towards Kimball that would take me north to the condo by the lake where my father lay dying. 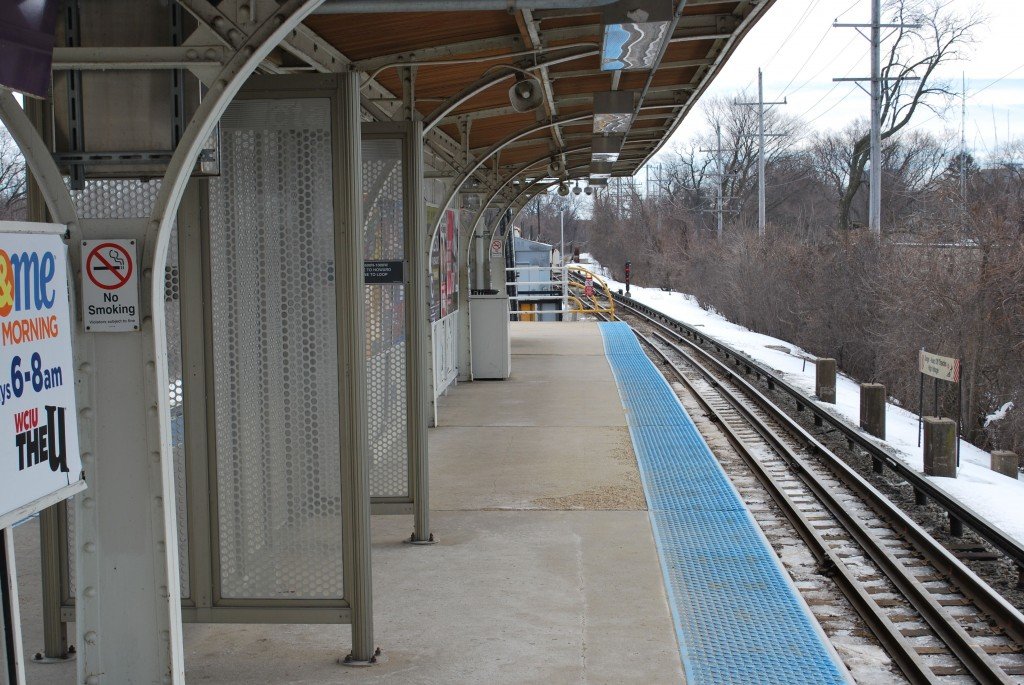 When it is cold and you are enduring the peculiar boredom that grief induces and you are stuck waiting in a place, you might start observing, dispassionately, what you might not have seen at other times when you were thinking about all the 10,000 things in your life. Thus it was that after a Green Line train stopped and then continued on its route, I looked across the tracks to where the pale orange lights of the two warming shelters glowed, open-fronted rooms full of ersatz spring. Suddenly I noticed that clustered in one of the shelters was a congregation of pigeons, wall to wall. Humans huddled in the other area, or stood in the cold. No one seemed to notice the odd separation. No one initiated an advance on the pigeons’ territory. The birds moved together, bobbing heads, cooing. Occasionally one or two would lift across the tracks to my platform where human persons were using both lighted areas, suss out the situation and fly back, though it wasn’t as though they were exactly flying—slow and almost lazy, it looked a little more like swimming through thickened but supportive air. My train came. I got on. 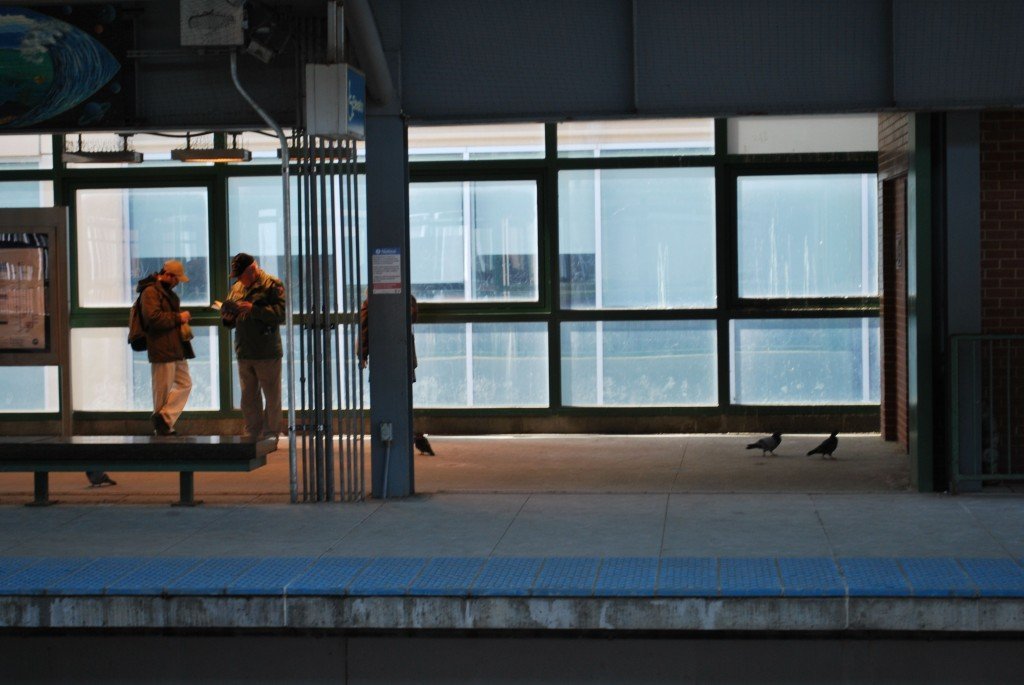 Another Saturday, waiting. The same pigeons reposed in the same warming area. Today there were multiple delays—a bridge over the Chicago river had gotten stuck in the open position after having been raised to allow some tall boat passage to or from the lake—old bridge, old machinery—so trains backed up, were rerouted, were delayed.

I stood there testing the strength of my cold shard of sorrow, for it wasn’t my dad, it was I who was caught by the snow queen. A pigeon walked by in front of me, bobbing its head, feathers iridescent in the daylight-dimmed glare of the warming lights. 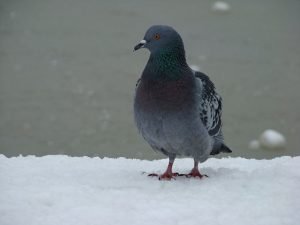 Bob, bob, bob, mincing along on its little red feet, head gleaming, beady orange eye shining. I hadn’t noticed before how many shades of blue, purple and green could be scattered through one silly pigeon’s head. “One of God’s creatures,” someone said. I looked around. A small woman wearing work boots and a loose brown Carhartt canvas coat and work pants smiled at me. She had a gold tooth and a glimmering headwrap, a turban with an intricate design in purples and blues shot through with gold threads. I showed her the pigeons’ warming zone; she took a picture with her cell phone. The train came and we got on to sit together and chat about that bridge that frequently got stuck, the Hawk, and our childhoods roaming the streets of the city, until she got off six stops later at Fullerton.

A third Saturday, the air was warmer and I noticed the flat quality of the damp gray sky edged by damp gray buildings. I hadn’t understood how many colors pigeons come in, rendering each bird its own unique presence. The artificial suns in the warming areas glowed. 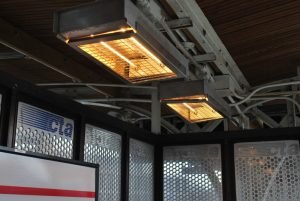 Two women stood in the middle of the one that belonged to the pigeons, who had scattered and were now flying their gently galumphing flights down to the tracks, between the platforms, or up on the railings. Several of the birds took up positions in the warming zone, walking about, pecking at the ground. The women moved to their right. More pigeons arrived. The women shrank against the wall. More pigeons joined their friends, basking like sunbathers or walruses on a beach, and the women walked out in the cold.

Towards the east end of my platform, near the stairs to the walkway over the tracks, a young couple burdened by large backpacks engaged in an intense discussion. She took off her pack and knelt down to dig something out. Pigeons flocked to her, clearly expecting food, but she paid them no mind. She rummaged.

He walked off through the exit leading to the street. She closed the pack, looked up; dismay crossed her face as she stood, causing a swirl of pigeons—of doves!—to circle upwards around her and settle on various perches. She called his name, then climbed halfway up the steps to see better, pigeons accompanying every move. Where had he gone in this forest of buildings, where she was clearly a stranger? The people on the platform had turned to watch but no one moved or spoke to her; I was not the only one who had seen him vanish into the gloomy opening. What would she do? I walked over and told her where he had gone. She moved quickly to the exit. The pigeons settled back into their semi-lethargic hops and flights, re-congregating in the warming zone. 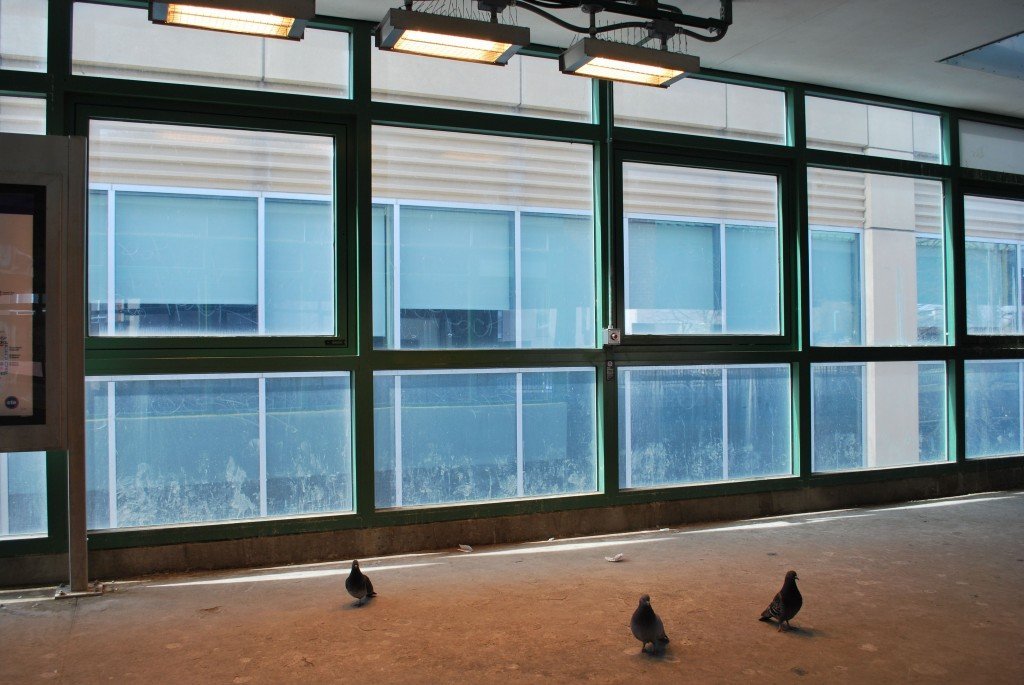 The season turned, the Hawk retreated, and there was no longer a reason for Saturday treks. One gusty morning my dad’s memorial took place in a gracious room with a view through large windows of Lincoln Park’s pale, just-emerging foliage. After sad and funny speeches by relatives and friends, a young tenor sang Copland’s setting of “Shall We Gather by the River.” Shadows and light rippled across the listeners’ faces and stilled bodies. The sonorous piano chords seemed kin to the clouds ranged out over the lake like an entirely new, mountainous region.

This year, by happenstance, I stood waiting on that platform during an afternoon when snowflakes blurred the sky and settled on people’s hats and coats, as in an old print by Hiroshige. Two pigeons—only—fluttered here and there; a crowd of people stood in the warming areas like black- and gray-dressed penitents. Did anybody notice a lessening of iridescence in the atmosphere? Did the pigeons miss their companions? I wondered where they had gone and how they would live, these nuisance birds that had gently tethered me to the here and now, these birds that had helped remind me that we live in a shared world.  No incidents occurred.