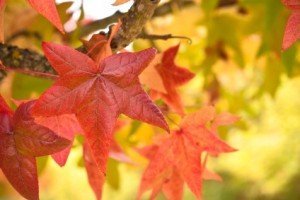 The sky was bright gray that afternoon in Oakland, California, as I walked my aging dog up our steep and leafy street. I was in my late twenties and in a hurry to get back to my desk. My dog was sniffing slowly, as she always did, but today, instead of growing impatient, I simply looked around. The tree under which we had paused was magnificent, reaching toward the sky, its leaves five-pointed like a star. I loved how those leaves turned dazzling red in autumn, and I’d learned the tree was called liquidambar. Two rows of them marched around the crown of our street like gemstones.

Gazing at the liquidambar’s star-shaped leaves, I heard a high, thin “fee-fee-fee” in the very tops of its branches. I had never paid much attention to birds, though once, as a child, I’d fallen in love with a robin who built her nest outside my bedroom window. But that was long ago.

The “fee-fee-fee” continued, so I returned home, dug out some heavy old binoculars, and headed back to the top of the street. Struggling to focus the glasses against the gray sky, I at last spotted a golden-brown bird with a little crest and a short tail, its eyes hidden under a black mask. Then another bird, and another. A whole flock of them! Who knew so many birds were carrying on their lives right overhead? Paging through a field guide lying around the house, I came at last upon the cedar waxwing and was surprised at the rush of pleasure—a name to go with the bird! I felt like I’d discovered Antarctica.

Soon I was identifying all the birds in the yard. In the low branches of the avocado tree I found house finches with brown stripes and red-orange heads, and for the first time I listened fully to their songs, each one a meandering melody rising and falling, each song unique. I felt bathed in liquid rapture. Why had I never before paid attention? I spotted buffy-brown California towhees scratching in the flowerbeds, and soon I recognized their rhythm: a quick hop forward, another back. One-two. One-two. The yard birds introduced me to the nature right outside my urban door. More than that, they became friends—friends I listened to and recognized on sight. I bought a small seed feeder and fixed it to our kitchen window, and finches and towhees jumbled together on its surface, scratching and chirping.

A few years after identifying the cedar waxwings, my bond with birds was sealed when a tiny, naked nestling fell out of his impossibly high basket in a palm tree and landed on the sidewalk at my feet. He turned out to be a male hooded oriole, and the change he brought about in me is a story I tell elsewhere—of volunteering in urban wildlife rehab, handling crows and hawks, feeding barn owls and swallows and baby birds of all Bay Area species. And, over the years, of welcoming the hope they shared in small doses until I could finally allow it to roost in me for good. 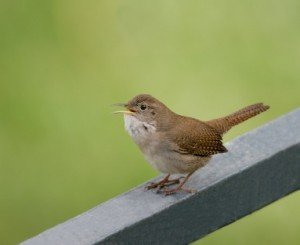 Nearly thirty years have passed since I first identified the cedar waxwings. Now I live in Boulder, Colorado, and I spend each April and May looking for returning bluebirds and wood ducks, bright yellow warblers and diminutive house wrens. I love the wrens especially, the male’s many-phrased rhapsody spilling from nearby trees. As the air warms and he gets down to the business of raising a family, his song will fill the air every morning; it will define every summer afternoon and evening. He sings so long and so hard that I wonder when he finds time to eat, let alone bring food to his brooding mate.

This year the birds are late with their singing. They were slowed by heavy snows, the last on May 1 like a foot of wet cement. Finally this week I can hear the house wren, though he sounds like he is just warming up. Perhaps he is one of last year’s brood, practicing his song for the first time.

But my favorite may still be the oriole, though now it is Bullock’s orioles I watch in my yard, the males in stunning orange-yellow, their black wings splashed in white. For the past two summers an oriole pair has visited our feeder, the male announcing his arrival several times each day with an excited throaty chatter. We had no trouble attracting orioles once I learned their weakness for grape jelly. 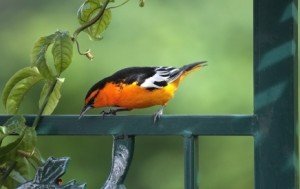 Last year the orioles visited each morning shortly after dawn, and stirred from my dozing by their hoarse calls, I would stumble out of bed and lurch to the patio half-dressed to hang the feeder in its tree. (We take it in at night to discourage raccoons.) The male would zoom down the narrow channel between our house and the next and perch nervously in the tree above me, landing on the feeder the instant I’d retreated inside.

Today I have yet to spot an oriole, though I hear from other birders that they are back in town. But in the very moment that I sit down to write this post, a trembling of spruce fronds just outside the window catches my eye. I look up and gasp—a blaze of orange just inches from the glass! He is back! I feel a surge of joy.

I run to the kitchen, retrieve the feeder from its winter storage, stock it with grape jelly, and hang it in its familiar spot. Today the male pauses outside my window only a moment before dashing away in a flash of black and white. But later I will see him lapping jelly, his breast and back bright orange, the female above him in the tree like a sentry, pale yellow-gray and watchful.

It’s been nearly three decades since I paused with my dog under the liquidambar tree, and I am still learning the rhythms of the birds. I often sit at my door watching their comings and goings, listening to their chatter. I still memorize their names—a lifelong quest to understand the more-than-human residents with whom I share this place. But more than their names, I learn their habits, their wants and needs. I work to protect the health of the neighborhood on which they and I both depend for life. For we belong to one community, the birds and humans and insects and trees and pets together shaping each street, creating our place. The day I began to join this wider community was the day I paid attention to a “fee-fee-fee” drifting from the trees in Oakland, California.