People are afraid to merge on freeways in Los Angeles. This is the first thing that I hear when I come back to the city . . . Though this sentence shouldn’t bother me, it stays in my mind for an uncomfortably long time.

Heaven and Hell are just one breath away!

—a painting by Andy Warhol[1]

Being an Urban Citizen

Clay, the main protagonist of the novel Less Than Zero, is a native of a Godless Los Angeles and has been painted by Bret Easton Ellis as an example of the ills of urban excess—young, bored, over-privileged, well-connected, and a social deviant.[2] We must merge at some point, interact with other city inhabitants, and then retire to our urban bunkers for shelter from the madness. It must be acknowledged that Clay is but one possible archetype of an urban citizen. This Clay of Bel Air does not live the same life or possess the same life chances as a young kid living in “white flighted” Echo Park, Los Angeles. These kids are one with the city organism.[3] Clay and the young kid from Echo Park share different lived realities as city dwellers. Each must find his own survival tactic. But each is a product of the at times forgiving, yet often constraining complex forces that beset an urban citizen.

Milgram’s idea of a Small World ties everyone in the world into a network separated by six degrees.[4] You could possibly have connections in Washington Heights, St. Paul, and a colonias in Mexico City. Our connections may be only around 3.74 hops away, as most people on this planet are strapped to a Twitter and Facebook account like an oxygen mask.[5] But technology cannot solely overcome spatial proximity and intimacy  and the need for human and social capital among urban dwellers.[6] Our modern world may shrink due to common interest while the physical and emotional resources necessary to house us become more and more constrained. Such constraints can place undue burden on the state of health among urban dwellers. Community is ingrained for some. For others, they live only in a zip code. 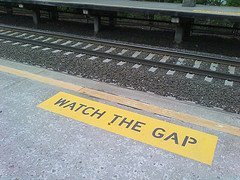 Take for instance Cold Spring, New York. North of New York City, in the Hudson Valley, it could be called a semi-urban exurb. I would surmise that the year-round inhabitants want no part of Wal-Mart or “McMansions” and have kept it free of these things for good reason.[7] The “Gap” (Figure 1) is quite evident between Cold Spring, a very intimate hamlet that includes both non-conformists (mostly from the Super Creative and Creative Classes described by Florida) who seek year-round tranquility, space, and astronomically high-priced organic tangerines, and those who live most of the time in New York City amid noise, “urban huddle,” and also highly priced run-of-the-mill tangerines.

The air in Cold Spring is ripe and healthful. Cold Springers working in New York City, as well as weekenders fleeing it, jump on Metro North and begin their vinyasas as they enter the Valley. Green space is available in Cold Spring without much effort: one only has to look outside his door for nature. Even the town center is a place of intimate community. Having your own plot of land is part of being a Cold Springer. Green is in Cold Spring’s DNA.

Green spaces such as the ones in the photos below serve many important uses: recreational, aesthetic, and ecological. Why should we make provisions to keep cities green? Cities are known for concrete edifices, technological advancement, and a fast pace. By definition, such intimacy with nature for the most part has to be created and dedicated for common use within a city. Maas and colleagues found that in a Dutch city, there was indeed a positive relationship between having green space and more positive perceptions of health.[8] This relationship was even more pronounced for the urban poor in that study. So those dahlias in the community garden are important to all of us.

The photo in Figure 2 was taken from my friend’s Brooklyn walk-up kitchen window. It was a vast sea of greenery, with collective gardens and space maintained by certain inhabitants of the duplex. It brought my intention to my breath. I loved the shops and vibrancy of Brooklyn. But places such as this garden illustrate the efforts undertaken by those in the urban center to recapture some organic sources of oxygen. 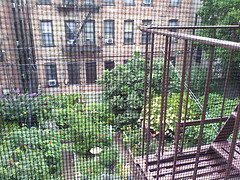 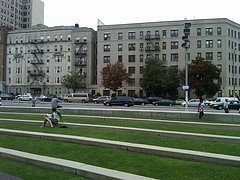 Sometimes a city makes a pointed effort to create green where the people are. New York City is a great example of this movement. Outside of the Brooklyn Museum, the green space shown in Figure 3 is maintained by the city for use as a reading space, a place to congregate, and a reminder to slow down before entering the city streets again on the trek to the subway.

Is the Solution Found in Commune “E-Topias”?

How can cities bring green into the daily lives of their dwellers? The “e-topias” advocated by William Mitchell of MIT call for all in one place to both live and work.[9] As a cultural incubator, this would call one to act as a citizen within a designated space. W. Rossler notes the importance of creating social contracts (in his short video, “Creation of Social Contracts”) in providing space for each individual to share experiences.[10] These “e-topias” may solve the concerns of making daily needs and resources closer and available. But I take pause. Would these green and living spaces of the “e-topias” be based on a sense of collective, limited ownership (such as restricted use of gardens in London)? Such a proposition may greatly hamper social innovation and a sense of larger community outside of its polis walls. It may also strip the urban cultural character, promoting an unappealingly faint Silly Putty version of a city, lacking diversity.[11]

It is quite possible the aggregate benefit of “e-topias” may be offset by increased social and health disparities among those without access. Also, where will the poor and aged live while their homes are razed to make room for this innovation? Will there be a parity of access to these new communities regardless of income? But urban centers such as Brooklyn somehow “became cool.” To Zukin, the realness of urban culture becomes synonymous with “authenticity” to a vision of Brooklyn that does not pander to the wishes of outsiders. The grittiness and lack of organic green sources made way for colorful motifs of strength on the sides of tenements and upstart trendy centers bringing creative culture to the area. Cities need cultural and economic growth for the benefit of all of their citizens in order to exist and thrive.[12] What is the social cost of being considered “cool,” particularly for the most disenfranchised?