Nature is the interactions of energy, material, and life that characterize our verdant planet. Nature includes people, of course, a kind of life, and our interactions with energy and materials. In the twenty-first century, many of those interactions happen in cities, at least according to geographers working for the United Nations, who find that more than half of humanity lives in town nowadays. (The definition of town varies from place to place, as does the density of habitation, from the suburban fringe to downtown.) Judging by the reports in from the globalized economy, many of the interactions outside of cities are also about cities; cities pull resources in that they cannot produce themselves, and cities export their wastes and other products back out. The global footprint of cities extends far and wide.

Nature, in more modern terms, is a network. It is like an economy, but greener. Nature’s network is formed of nodes—the interactors (various manifestations of energy, material, life)—and the connections between and among the nodes—the interactions. One of the marvelous aspects of a network, economic or natural, is that it can be seen from the perspective of any node; each node is the center of its own universe. 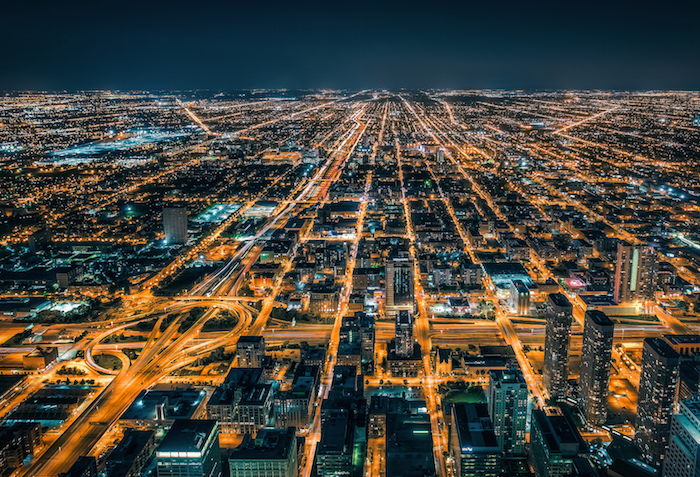 For most of the last ten thousand years, since the first cities were formed, humanity has seen the world doggedly from the perspective of its own node. We looked out on the interactions of nature and thought: how can we manipulate them to our advantage? If it was cold, we gathered materials and constructed shelters, buildings. If it was wet, we paved the ground with paving stones, then cement and asphalt, to seal the mud in. If we lacked something in our local environment, we hopped on a horse, then a streetcar, then the automobile, and went to get it. In short, we have seen our interactions in terms of their direct effects on the local and discounted the indirect effects on the distant.

In more recent times, circumstances have made it abundantly clear that some of these indirect effects are less than desirable. Severe storms, droughts, heat waves, and floods all characterize disturbances in the atmosphere that are the consequence of introductions of carbon dioxide, released from its slumber in underground fossil fuels, through combustion by human beings wanting to stay warm or get around. Wildlife species, which have been sources of joy, inspiration, and food for thousands of generations of humanity have been practically eliminated from much of the continents and large stretches of the ocean. We have to watch what water we drink and what air we breathe and what soils we grow our food in. It is a perilous time for those of who depend on nature, which, of course, is all of us.

But that was not the question posed by Drs. Warren and Agyeman. The question was not how is the urban ethic critical to twenty-first century nature? (A possible answer to the unasked: Modern cities, properly managed, can reduce per-capita resource consumption without loss of quality of life; they are, or at least can be, environmentally efficient, a win-win for the economy and the environment.)

The question was this: how is nature critical to a twenty-first century urban ethic?

Nature is critical because, of course, cities depend on nature. The obvious answer is no nature, no city, and no city, no urban ethic. No one wants to face the ethical quandaries caused by a city that suddenly lacks water, or food, or heat, or energy. Each city depends on an elaborate maintenance network, partly engineered by us, but ultimately provisioned by nature. The particular geography and ecology of the locale where a city is placed determines its sensitivity to natural disasters and the distances over which materials must come. In fact, cities are learning that by studying the former ecology—in pre-pavement, pre-built times—they can learn lessons to enhance their long-term sustainability, take advantage of their circumstances, and respond resiliently when problems do arise.

Nature provides more for the urban philosopher, for nature provides the ultimate context in which to make ethical judgments. Here is one way to see that: Cities are famous incubators of new ideas. Why? Because the experience of living near people different from ourselves helps us to see the world from new perspectives. By seeing the network locally of an economy or ultimatelly of nature from a different node’s view, we can gain insight, even compassion, for the role of another. Our choices are not about us alone. Different perspectives come from different cultures, but no culture is so alien as the perspective of an elephant or a cardinal bird or oak tree, which is exactly why urban zoos, aquaria, botanical gardens, rooftop farms, bioswales, greenstreets, and natural areas are so important—they remind us that our human perspective is not the only one.

This idea seems to have finally caught on, at least among younger folks. Young people, inheritors of the mistakes and the triumphs of their parents, seem to have an idea of the city that is less about monuments of glass and cement and ego, and more about tending flowers and vegetables and chickens. Eco-hipsters ride their bikes, catch the streetcar, choose to live in green buildings, raise backyard chickens, attend farmer’s markets, and eat local foods, because urban life should be about all the human pleasures: art, culture, science, entertainment, work, play, and an appreciation of and active participation in nature. More to the point, shaping an economy that responds to and supports nature’s network is the surest way to long-term prosperity, national security, public health, and social harmony. Connecting to nature creates new worlds of possibility.

What’s needed going forward is a connection back outward to the hinterlands. Though we all suppose good things, we don’t really know how moves toward environmental sustainability in cities enables conservation of the environment at large, nor have we adequately defined how the conservation of the world’s wildlife and wild places supports cities, except in some narrowly defined cases (like the protection of watersheds that provide cities the water they need). These are questions, however, that the urban conservation ethicist can address as we work together to develop a more complete understanding of how nature is critical to an urban ethic.