Once in the Nevada desert at night, way out in the desert alone, and once in my dreams recently, I became aware of something so terrible approaching—which I could not see—that I became paralyzed with fright. Nothing in my body could move. I am not a loud (or fearful) dude, but I felt myself screaming to the end of the world. Soundlessly. Not a sound could come out.

When people actually drown, it’s usually not the Hollywood “HAAALP ME!!!” everybody thinks. People drown all the time within a few feet of loved ones who never know a thing until afterward. Sometimes it is peaceful. Your lungs fill, and suddenly this is what you are doing right now. The other world slips off and away just like that. And that’s okay. I know a beautiful brother who this happened to, off Galveston. He lived to tell me about it years later.

Prince Charles says we’re “sleepwalking into catastrophe.” I try not to watch, and just work.

Will we scream when it’s too late to hear ourselves? Or will we slip beneath the waves hardly knowing a thing?

Right now I’m in Dallas for six months. I’m working to bring the greater Dallas–Fort Worth Metroplex into a last-ditch effort to save this 10,000-plus-year-old prairie known as the Fort Worth Prairie Park. The Texas General Land Office wants to sell it to developers. We’ve kept these 2,000 acres alive for seven years. This last prairie on the backdoor of six million people offers an Eden of wildlife and sun, wind, grass, and blue sky. Our coalition’s goal is to create a regional grassland park for all of North Texas and a national epicenter for Ecological Health.

In the big, relatively new American city all around me, the world seems to hiss and whisper and breathe, like the secrets of cities do. My hand brushes yellow-white blocks of Texas limestone pulled from rich Texas soil and cut for new or historic walls. I know where the natives are. My eyes connect to a string of life dots: planted live oaks and post oak trees and accidental hackberries growing out of the concrete city, and the yucca plant and fugitive native prairie grasses pushing aside the railroad scrabble.

My local and national job—getting Americans to care about a land it has so violently killed—is not without its, umm, challenges. From Canada to Mexico, and from just east of the Mississippi to the Rocky Mountain Front, the prairies have been ripped up for monoculture crops or overgrazed to lifelessness, their legions of wildlife trapped, poisoned, gassed, and shot. You swoon for the open space then realize you’re fenced and squared in. And the cities? It bugs me that the majority of the Great Plains states and cities have created so few parks—even city parks—in general, and have protected almost no wild prairie of any size in particular. I “brain-sweep” from my mind the darker thoughts of a deeper murder—a worry that the original American prairie was so full of abundance and wildlife, so free, and populated by such healthy, self-determined savages whose existence counterpointed stories other people were telling, that all traces must be extinguished. People should have no freedom on the land. 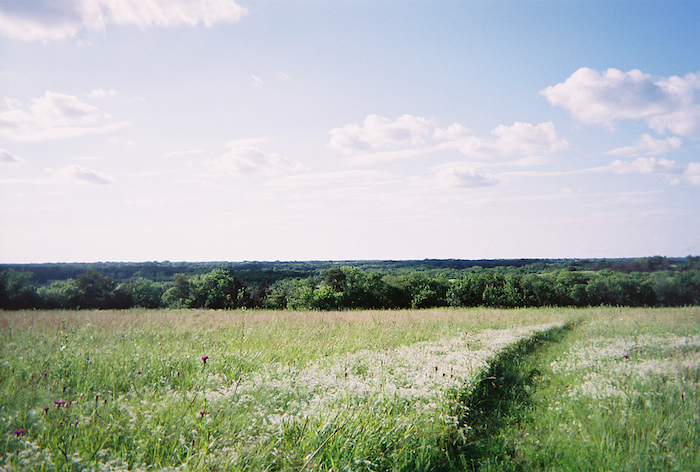 But I know better. Every day I insist upon an ultimate goodness in people.

In the Academy Award-winning film Lincoln, First Lady Mary Todd Lincoln speaks about how the Washington establishment was continually looking for  “…Further proof that my husband and I were prairie primitives, unsuited to the position… [and elevated by] an error of the people.”

Mrs. Lincoln and the President hailed from twenty-two million acres of Illinois prairie falling beneath an advancing frontier of settlement, its grass jungle of ten-foot-high big bluestem, bison and wolves still fresh in the nation’s blood. The prairie wilderness was part of the common American story.

If fellow Illinoisan First Lady Michelle Obama said that now, nobody would know what the hell she was talking about.

In President Obama’s second Inaugural Address, pledging action on climate change, his American words soar over our nation: “…our national treasure—our forests and waterways; our croplands and snowcapped peaks.” The breadth of the country has a gap. Our prairie middle is erased from culture and memory. Recently, as the President (at last) unveiled an Executive Branch climate change plan, he reduced us again. “Croplands.”

I take people out to the last of our living tallgrass prairie here in the DFW, where they can walk a few miles in a land that is ancient yet fresh and alive as if born this morning, and connect with the power of something almighty. Breathe, work. Let themselves soar. Then I help them see that even in the city, we still live on the prairie—so we can keep it in our hearts. Our bloodstreams flow like creeks. We all live downstream. Prairie storms consume us from overhead. Sometimes I work with young felons or other troubled youth who feel like they are at the end of their lives. We try to learn two things: to take care of body and Earth as one, and by taking care of others, we take care of ourselves.

Years ago, driving cross-country in early spring to New York City, escaping the Great Plains torment once again, I stopped at a roadside rest area in cultivated and pesticide-sprayed Illinois. A sign described the former twenty-two million acre tallgrass prairie. I walked to the fence to look over the endless horizon. Harvested feed corn stalks were mashed into the soil that awaited another year of plowing. Looking down, I noticed the corner of the fencerow. The machines couldn’t reach there, and a browned thatch of prairie grass stood. Something else caught my eye, shining, yellow, black-banded, and wet with mud. Down in the grass, holding on to what’s left, two bull snakes three feet long were wrapped around each other, twisting and fucking in slow motion, constricting the life out of each other, into each other, to make something new.

“a prairie vantage of the horizon” by Robert Nunnally. (CC BY 2.0)