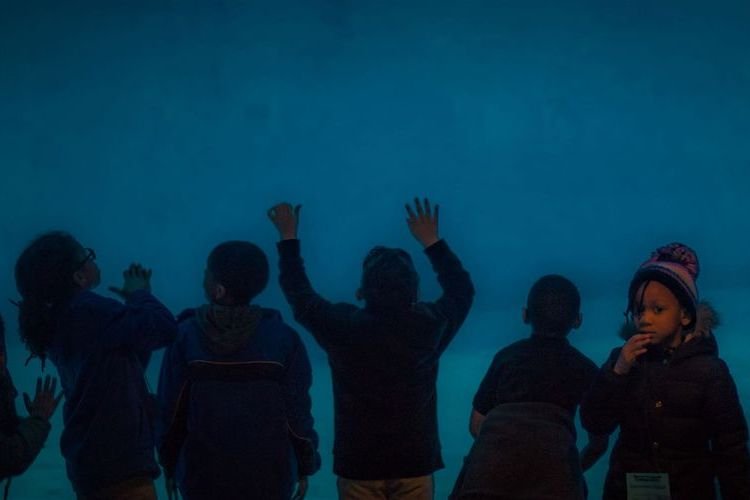 Many years ago, upon arriving at a birthday party, my three-year old son made friends with a large chicken piñata. Once the whacking began, however, he became so inconsolable that he had to be taken home. I wish I could recapture a sense of what it felt like when my boundaries between self, other, and imagination were so porous that I could experience compassion for a piñata. Now, long-steeped in adult-style human consciousness, that’s not so easy.

One day, while I pondered what might be a catalyst to open a window into my “wild” self, I realized: I could go to the zoo! Given that my sensory equipment, emotional activation pathways, and cognitive processes all resulted from billions of years of evolution, I thought that observing animals who reflected such relations might trigger such a wild connection.

In this photographic meditation, I draw from photographs I took at the National Zoo and Baltimore Aquarium, which created concentrated opportunities for me to observe interactions between humans and other animals (like this school group looking into a dolphin tank). As I strolled through these places, I thought that perhaps I would find and record echoes of myself through the eyes of others. Or perhaps, my visual record of how animals at these institutions are treated by the adults in charge would suggest the internal relationship we modern humans have with the wild parts of ourselves.

For 90% of the time period in which life evolved on Earth, it existed only under water. I begin my visit to the National Aquarium transfixed by the gently throbbing jellyfish, who first showed up about half a billion years ago. But the jellies are not part of my evolutionary lineage, and so seem totally alien to me.

I move on to fish, whose evolutionary artifacts and history reside deep in my body. Nonetheless, perhaps because I never completely lost my fear of water, I feel no somatic connection with these creatures either, who thrive and move gracefully in a medium in which I would quickly die were I to try to breathe in it.

I find it easier to relate to the air-breathing dolphins, though their show of circus-like tricks disturbs me. I remind myself that they would normally be swimming forty miles a day. They also normally pass on complex social behaviors to their offspring, a trait that meets the human definition of culture. Individual dolphins are able to recognize themselves in mirrors, and evidence is accumulating that their neural systems have evolved to create social group consciousness. That we exploit their captivity to entertain widens the empathic gap between our two species.

At the National Zoo, I become keenly aware that many animals are placed in faux habitats, which superficially mimic their actual ones but have meaning only to human visitors. The enclosures act much like a stage set in helping audience members willingly suspend their disbelief, even while the actors on stage know well otherwise. Still, I accept the effort to visually mask the enclosure’s sterility. Like other humans, I have become accustomed to living in artificial environments (real and virtual).

I recall eating ice cream while watching Mike the polar bear with my granny at Chicago’s Victorian era Lincoln Park Zoo. At the time, Mike’s repetitive rocking on his haunches seemed endearing. I was too young to understand that his frustrated instinct to walk and swim miles every day, suppressed in his cramped enclosure, generated his neurotic behavior.

The Fennec fox paces to and fro continuously. Even for zoo animals who do not exhibit obvious neurotic pacing or rocking behavior, none are able to fully experience the behavioral expression of their genetic make-up. Animals displayed in artificial enclosures lack access to the multi-sensory inputs that they receive and respond to in natural habitats. Gregory Bateson said, “The unit of survival is the organism and its environment.” I grieve the loss of the foxes’ ecological meaning.

Why am I and other zoo visitors so drawn to “feeding time”? Is it because most of us have become largely disconnected from the sources of our food, and “feeding time” peripherally connects us with our own wild heritage? After all, we modern humans would have considered our earlier selves, for most of our 300,000-year existence, to be an omnivorous wildlife species. Or is watching one animal eat another simply entertainment, like the Romans watching gladiator contests?

I notice adults and children seeking to interact with the imprisoned animals, or at least attract their attention. “Species loneliness” refers to humans’ hunger for connection with other life. Again, I ask myself—does this behavior indicate a connection our species has lost, or is it reinforcing separation?

I pass the barren elephant enclosure. Like elephants, humans originated in Sub-Saharan Africa. However, our brains enabled us to expand to habitats that bear no resemblance to those in which we first evolved. Now we can modify any habitat to suit our needs, and create distinctive habitats called cities, even as we retain a vestigial instinct to include some green plants in our lives. But we spend increasing amounts of time in virtual ecosystems, insulating ourselves from sensory feedback from physical surroundings.

Moral dissonance deepens in me while moving from the enclosures hosting jellyfish to fish, to reptiles, and finally to mammals. My unease peaks when I arrive at the primate house. I share 97% of my DNA with the orangutan, two-thirds of whose habitat my species has destroyed. And I am complicit, having consumed my share of palm oil whose plantations in Indonesia are driving orangutans toward extinction.

April 17, 2021, was the third birthday for Moke, the western lowland gorilla at the National Zoo. During his solitary birthday party, he played with an “enrichment” box presented to him by his keeper. But Moke’s birthday party does not distract me from the knowledge that he is serving a life sentence of involuntary confinement.

Whatever this girl is feeling in this moment, I want to tell her to hold onto it forever…

When I observe zoo animals through glass barriers, I often see the reflections of human visitors. To me, the reflections mirror our psychic self-confinement. We are separated from sentient beings on the other side by more than just a thick pane of glass. As presciently expressed by nature writer Henry Beston in 1928:

“… man in civilization surveys the creature through the glass of his knowledge and sees thereby a feather magnified and the whole image in distortion. We patronize them for their incompleteness, for their tragic fate for having taken form so far below ourselves. And therein do we err. For the animal shall not be measured by man. In a world older and more complete than ours, they move finished and complete, gifted with the extension of the senses we have lost or never attained, living by voices we shall never hear. They are not brethren, they are not underlings: they are other nations, caught with ourselves in the net of life and time, fellow prisoners of the splendour and travail of the earth.”