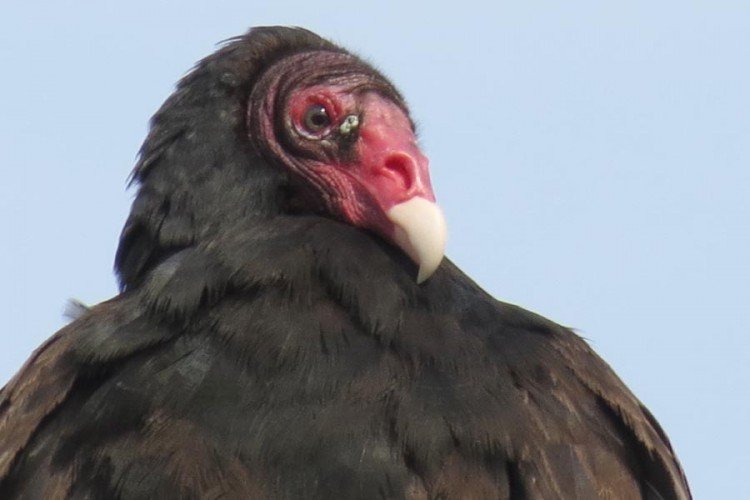 Plutarch wrote that “the vulture is a rare sight, and it is not easy to come upon a vulture’s young.” From ancient Greece to modern-day Chicago, at least that one thing has not changed.

Nearly two months had passed since the avid Chicago birder and photographer Kanae Hirabayashi had alerted my partner Joel and I to a nesting pair in Rosehill Cemetery, on the city’s north side. Still, I imagined that when I got there, I’d see the fuzzy white chicks, mouths open, eagerly awaiting regurgitated carrion. 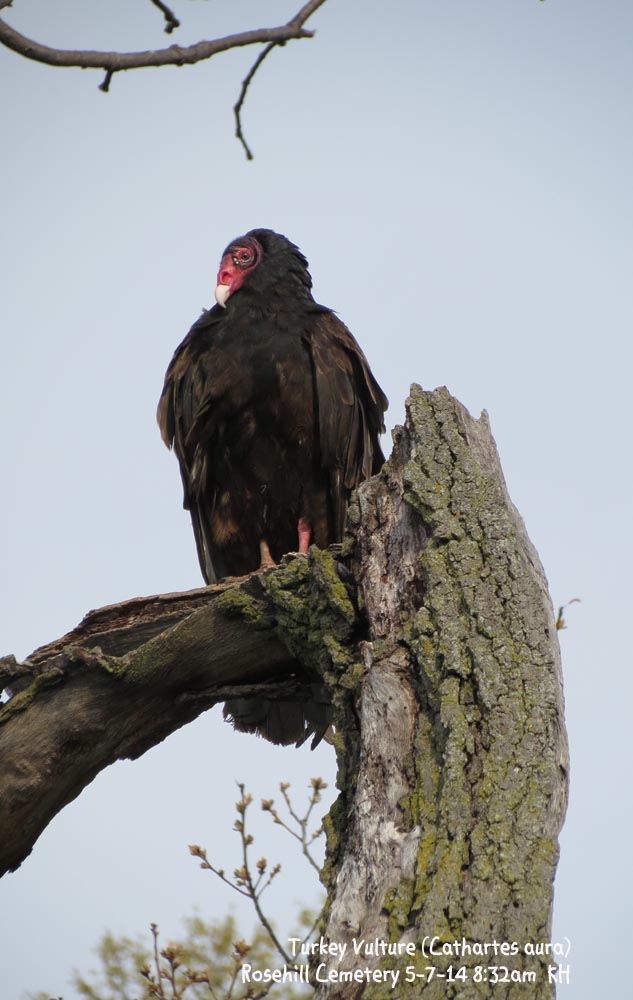 I knew from my reading that the vulture couple would have courted in April, and likely, in May, the female had laid one to three creamy eggs tinged with blue-green and spotted purple-brown. Both parents would have taken turns keeping the two-and-a-half to three-inch long eggs warm. Then, some 30 to 40 days after they were laid, the eggs would have hatched, and the downy and defenseless chicks would have stayed in the nest another 70 to 80 days before fledging.

I thought that gave me plenty of time. But when I finally made it to Rosehill in early July and found the dead tree near an old mausoleum in the Jewish part of the cemetery, the vultures were nowhere to be seen. The tree, anchored to the earth, stretching some thirty feet into the heavens, had a large hollow where the nest would have been. I stood on tiptoe and raised my camera up and into the hollow and snapped some pictures. The photos showed a few feathers, the only evidence that a nesting pair had been here. 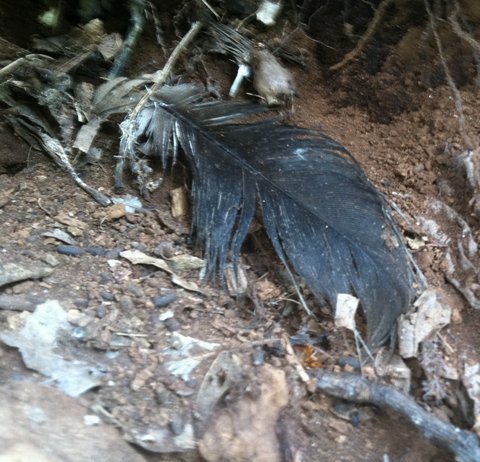 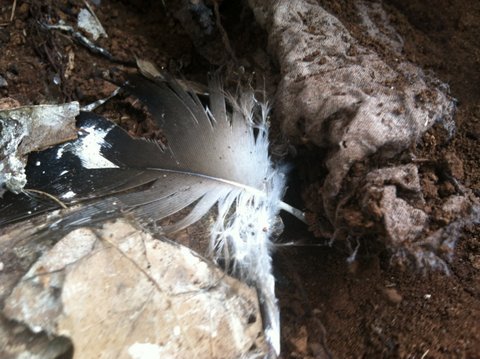 Plutarch again provides apt commentary for my vulture quest: “Their rarity and infrequency has raised a strange opinion in some, that they come to us from some other world; as soothsayers ascribe a divine origination to all things not produced either of nature or of themselves.”

Vultures are indeed a sort of mediator between the living and the spirit world, and yet they are also very much a part of nature. Their crucial ecosystem role is to dispose of dead bodies that would otherwise rot and become a breeding ground for disease. Their efficient waste-removal service also helps control populations of disease-carrying rats or feral dogs that also feed upon carrion.

Have you ever wondered why you pass fresh road kill one day, and nothing is there the next day? Indeed, in a world of increasing automobile traffic, the most common place to see vultures circling is over road kill, and they are much quicker and more efficient than waste removal companies. Vultures forage by smell, an ability that is uncommon in the avian world, and can pick up the faintest scent of ethyl mercaptan, a gas produced by the beginnings of animal decomposition.

Back to Plutarch, that insatiable knowledge-seeker, who, when thinking on vultures, quoted Herodorus Ponticus: “Great men of legend were always very joyful when a vulture appeared upon any action. For it is a creature the least hurtful of any, pernicious neither to corn, fruit-tree, nor cattle; it preys only upon carrion, and never kills or hurts any living thing; and as for birds, it touches not them, though they are dead, as being of its own species, whereas eagles, owls, and hawks mangle and kill their own fellow-creatures.” 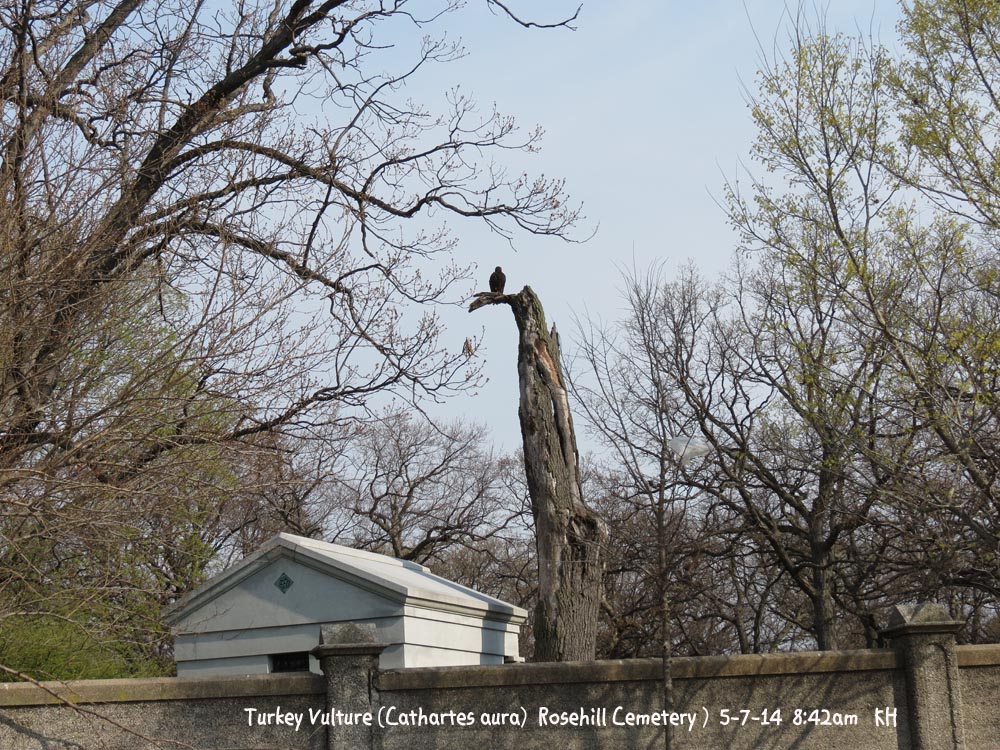 I have come to appreciate Plutarch’s view of the vulture as a noble creature above and beyond waste-disposal. Their natural history bridges the sky and the earth, the living and the dead. They move between worlds that we sometimes treat as conceptual opposites, bringing to light the falseness of our facile dualities, and illustrating the ultimate oneness of heaven and earth, spirit and matter. A mating pair, such as the couple at Rosehill Cemetery, chooses a dead tree to incubate new life, which they then feed by offering newly dead life … and so they embody the reality that life and death are intertwined and symbiotic, one supporting and complementing the other.

No wonder Tibetan Buddhists and others practice “sky burials,” leaving the human dead in “towers of silence” or on stones at the tops of hills for the vultures to consume. Some say the vultures help to release the soul from the body, while others say the soul has already left, and that giving the flesh of the body to the vultures is an act of generosity, providing food to sustain other living beings. Such generosity and compassion for all living things is an important tenet of Buddhism, and vultures are perhaps one of the more dramatic examples of reincarnation in the flesh.

And yet these sacred and ecologically significant animals, plentiful in North America, recently came to the very brink of extinction in Asia. In the fifteen years between 1992 and 2007, three vulture species suffered a 97% decline in population because of the use of the drug diclofenac to treat cattle. When vultures, who feed in large groups, ate dead animals that had recently taken the drug, they suffered renal failure and died. A number of organizations have been working together to ban the use of diclofenac and to establish 100-kilometer-radius “Vulture Safe Zones,” areas that are monitored for the presence of diclofenac and other types of harmful drugs used as painkillers.

Though vultures are in peril elsewhere, in the United States turkey vulture populations have steadily risen. And while we can be thankful that no “vulture safe zones” are needed, I consider it a rare treat to see a nesting pair in the middle of a large city. Perhaps the cemetery is a de facto safe zone. It feels appropriate that the largest vulture chose to nest in the largest cemetery in Chicago, raising new life amongst the dead. 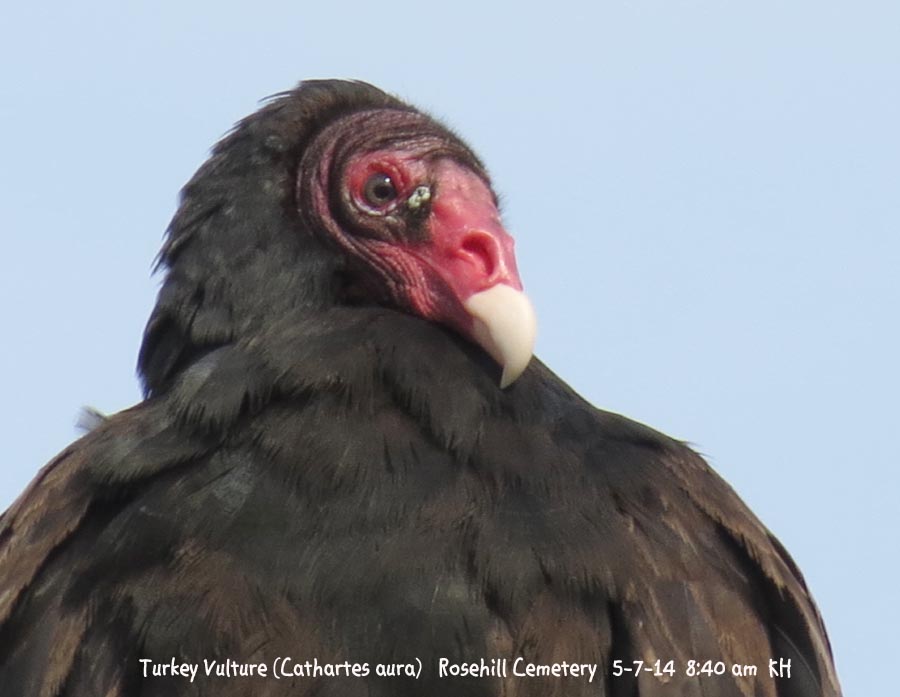 Although I saw no vultures during my cemetery search this past July, when I see that distinctive shadow in the sky I sometimes imagine the chicks hatching in the hollow of the dead tree, being fed by their parents, and then soaring out into the world themselves, in their distinctive upward V, with silvery under-wings and a slight teetering back and forth, catching the life-giving scent of a dead animal below.