“There is no inner man, man is in the world, and only in the world does he know himself.” ~Maurice Merleau-Ponty

Four years ago this August I left my apartment in Rogers Park, Chicago’s northern most neighborhood, and walked all day long for two days, some 63 miles, hugging the shore as closely as was legal, to the Indiana Dunes National Lakeshore. Why would someone want to do such a thing? Walk though one of the most industrialized, polluted, dangerous, impoverished areas of North America? Alone?

For ten years I’d been writing about walking in hopes of putting together a collection of essays on memorable walks I’ve taken over my lifetime. I’d written a lot already: hikes on the Appalachian Trail, walks in the savannahs of West Africa while in the Peace Corps, exotic adventures in Patagonia, South Africa, the streets of Paris and New York, hitchhiking along the country roads of Ireland, spiritual wanderings in the deserts of Arizona and along the windswept beaches of the Pacific Coast. I was feeling I had most of the main themes covered but I wanted to add one more—a classic, a reflection on walking in the UK.

So for a month I walked up and down and across the island, following the footsteps of Coleridge and the Wordsworths in the Lake District, up into the Highlands of Robbie Burns, along the coast of Cornwall, and out into the moors of Devon, trying to gather as much as I could for that last all-important essay that would really sell myself as a bona fide worldly hill walker, and thus credentialed, sell my collection to a publisher. On my last day I took one more walk out into the grand parks of London, and it was there, somewhere in Hampstead Heath, when I sat down and opened up my well-used Lonely Planet that I discovered something that would become the impetus for my walk out of Chicago and into its industrial wastelands to reach what’s left of the birthplace of the study of ecology—the marshes and dunes of Indiana. 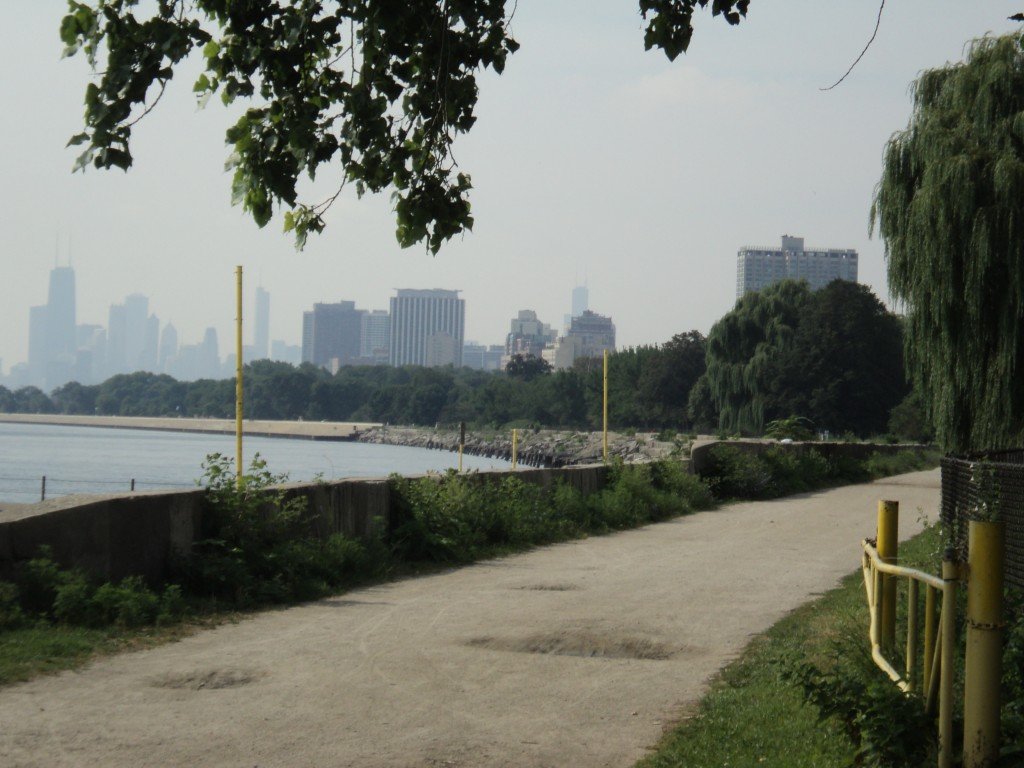 What did I read in that guide book? Well, what I saw was a map, and that map indicated that from where I was standing I could walk out of London to what is called “The Loop,” which is a circuit trail around greater London, and from there to my amazement I could actually return to several places I’d already hiked that month, via the UK’s interconnecting paths through public and private lands. Two days later, back in Chicago, on the beach in Rogers Park, I looked out into the Lake at those familiar plumes of smoke and steam rising from the strip of land across the water, and asked myself, If I can walk out of London to almost any of its rocky coasts and wondrous hills and dales, why can’t a person walk to a National Park, within view no less, that is supposed to celebrate the coming together of conservation, recreation, and industry to prove that all can coexist in America’s well-planned urban future?

Of course, anyone who has passed through Chicago along I-90 or has the slightest knowledge of the history of America’s booming industrialization knows why there’s no trail through the cities of Whiting, East Chicago, and Gary, or for that matter why the lakefront stops at Jackson Park on Chicago’s South Side. The titans of American Capitalism—Rockefeller, J.P. Morgan, Carnegie, McCormick—pretty much made sure nobody one hundred years later would be walking as freely as the Potawatomi along the shores of Lake Michigan hunting for game. 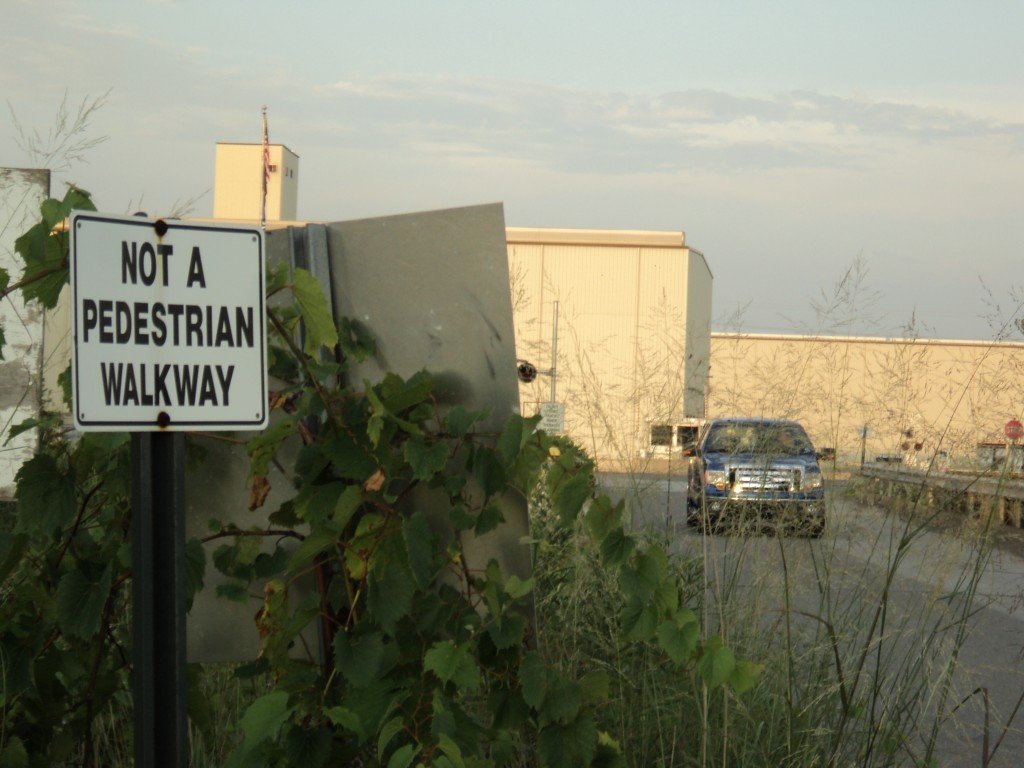 Was I crazy? Yes, and somewhat jetlagged and not at all ready to return to my routine of sitting in coffee shops writing about how important it is to let your legs roam free and feel the world rather than read about it or stare at images beaming from space onto a three-by-five inch screen in one’s hand. Of course, I told no one for fear of them talking me out of it.

For years I’d hiked in and around the dunes and in the pockets of wetlands and nature preserves throughout Chicago, always arriving by car or maybe once or twice by bike. I knew where I would have to walk—along the earplugged jogger’s lakefront, through struggling South Side neighborhoods, through British Petroleum, by coal mountains, under and across and next to probably more rail and truck traffic than anywhere in North America, and then of course along the steel industry’s most productive 30 miles in the world, and at its center “The City of the Future” Gary, where film crews came from the History Channel to get images for its documentary on what the world will look like in the future without people. (They also filmed in Chernobyl.) And then I still had 20 more miles after that. 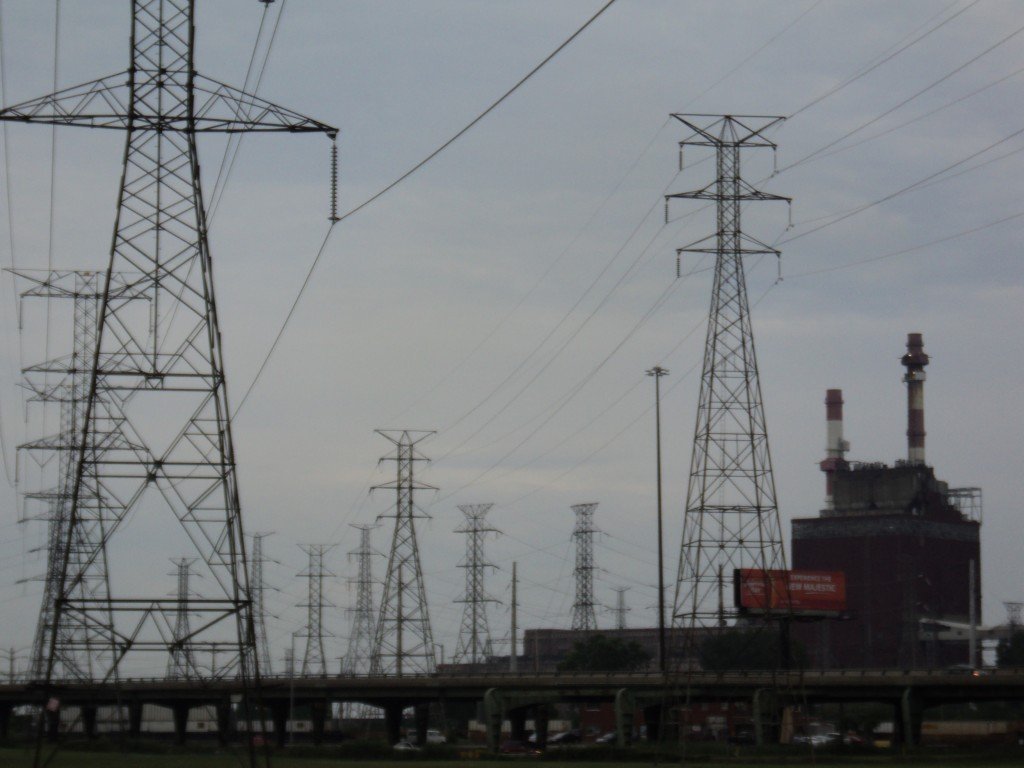 I didn’t have to go on Google Maps and type in the Indiana Dunes and see where the little “walking man” icon would go, but I did anyway. And for curiosity’s sake, I glanced at “street view” and followed some unknown driver as he weaved through the potholed, desolate roads outside of East Chicago by superfund sites and mountains of slag and scrap, only to come upon those wild wetlands of cattails that have somehow managed to survive. But the more I looked, the more intrigued I became at how foreign it all seemed despite thirty years of driving around or over it, or the few times I actually drove through it.

(If I’d spent a bit more time researching, I would have found, to my delight, that there is in the works something called “The Marquette Plan” that hopes to link the Chicago lakefront with a patchwork of trails and parks in the cities along Indiana’s shore all the way to Michigan—though it is still more “plan” than reality. Unfortunately, too, the lakefront vanishes for much of it, as the major power brokers aren’t about to open their massive landholdings for a few brave bikers and urban walkers. Yet, its future depends on us to forge for those who will follow.)

In the spirit of Burnham then, I made no little plans, and headed out a few day later. Full of bravado and a backpack full of power bars and a change of socks and underwear, I donned my pilgrim’s hat, a non-aligned baseball hat, and took off.

For the first twenty miles, I was sure I’d not make it, but once I crossed over or rather under the Indiana Toll Way and entered Indiana, I felt as if I were on the trail of a lifetime.

Two days later, I did arrive at a motel in near pitch darkness along US 20 near Cowles Bog, exhausted for sure, but absolutely dumbfounded by what I experienced. How could my perception of a landscape I thought I knew be altered so profoundly by walking? It was as if I’d seen it all for the first time. Was it because I’d seen it from the ground? Was it because I’d experienced it at the pace and the power of my body, not by car, not by bike, but step by step, moment by moment, sensation by sensation?

We are taught that the story of Chicago and its rings of cities and industries is the story of humans, of our inventions and brawn, our wealth and power, our arts and technologies, but from the ground, hour after hour, one sees or rather feels that it’s still the land shaped by glaciers a mile high, where there are still magnificent marshes full of muskrats who have had their own say in the matter along with innumerable insects and plants. And then of course there is the Lake, that aquatic body visible from the moon, blue to mirror the world above, and with it the winds and waves that move the sands of Indiana. 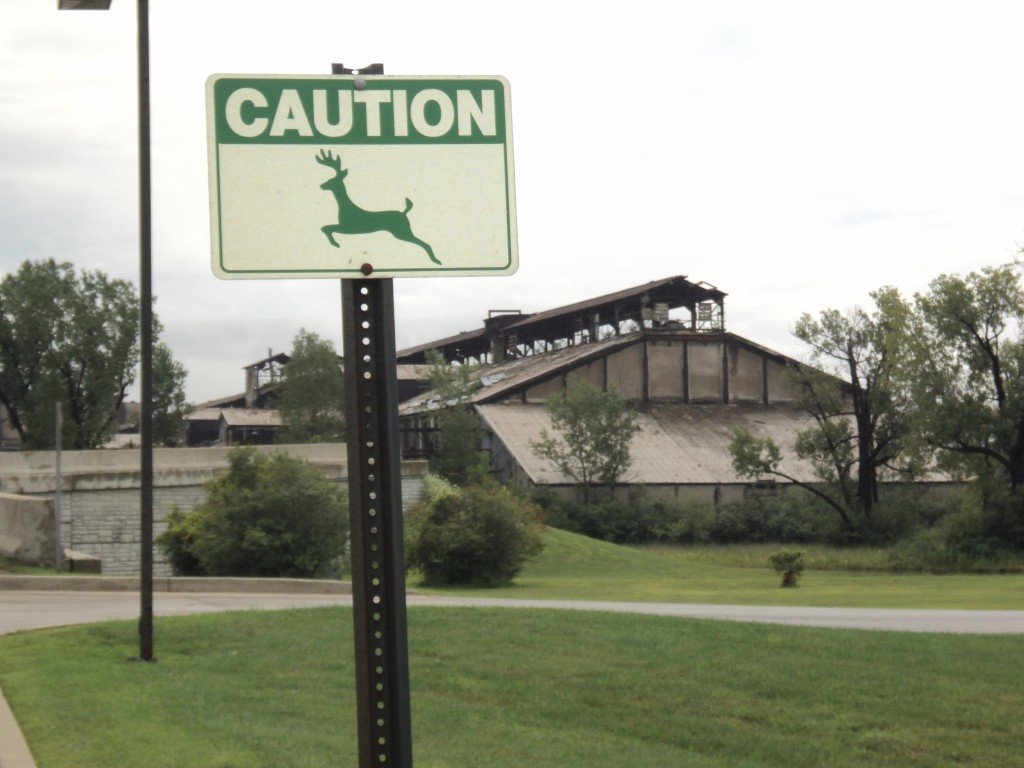 Needless to say, my collection of essays got scrapped, or I should say they evolved to focus on one walk that I shall never forget no matter where I walk from here on out.

Here are a few verbal images to inspire your own spirit of rebelliousness—facsimiles only, for to really see them you have to touch them and allow the earth itself to imprint them on your memory.

Standing on an iron bridge over the Calumet River and looking up at the monumental Skyway and imagining how many hands and arms, backs and bodies, built that black rainbow that arches over the ships and scrap yards below it.

A squadron of green parrots dividing as they made their way around the concrete pillars holding up the Indiana Toll Way.

Walking out of a Walgreens in Whiting and looking around the parking lot for my car.

Looking at an abandoned house in Gary and recognizing it as a carbon copy of the house I grew up in, same era, same window frames, same tar shingles, same back porch.

A prickly pear cactus growing out from under cardboard and roadside trash.

In the orange glow over East Chicago, a boy and a girl, ride their bikes through a canyon of gas depots and flaming pipes and pillars of BP’s refinery.

A train of coal cars, tagged in glyphs of neon paint, moving slowly along the horizon to the mills beyond the marsh before me. 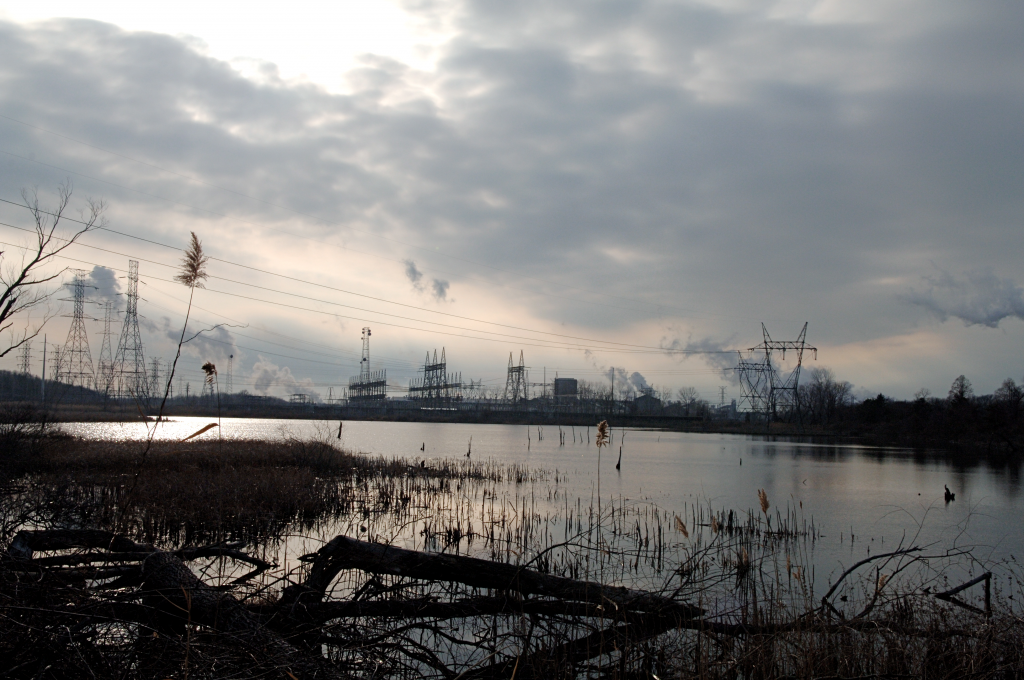 My hike to Indiana through Chicago affirmed some important things for me: by walking, we can learn to break through the abstract ways we’ve been taught to see and know a place, to trust the language we’ve always possessed but neglected to use—that of our own body’s sensations along with the memories, emotions, and imagery that informs us where and who we are. Many disturbing sights prompted me to examine why it is that we can ignore troubling environmental and social conditions that affect the health of the people who live in these areas as well as the greater metropolis and the entire Great Lakes region. Walking through these areas and cities, seeing them from the ground, at the pace of my legs, with my senses and emotions on high alert, profoundly altered how I see the city and its history. Perhaps walking is not merely a way to awaken a deeper sense of place but also the means—the figurative and literal pathways—to changing those places for the better. 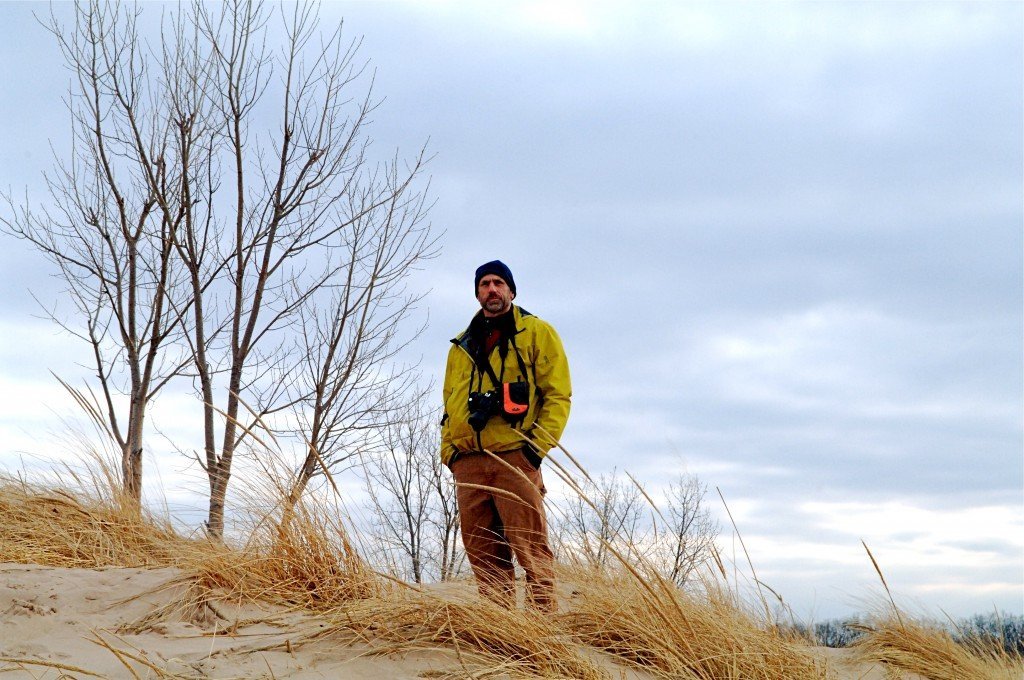 All photos by the author, except the bottom two in Cowles Bog, which were taken by Tuong Nguyen.