Whither We Will Walk

What is it that makes it so hard sometimes to determine whither we will walk? I believe that there is a subtle magnetism in Nature, which, if we unconsciously yield to it, will direct us aright. 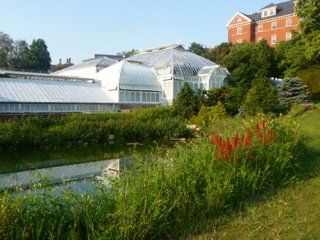 I started my walk at the top of the path on Paradise Road. To my right, the glass rooms and flowerbeds of the Smith Botanical Gardens. To my left, below, Paradise Pond, a small body of water named by famed Swedish soprano Jenny Lind when she visited Northampton, Massachusetts, during a concert tour in 1851. If you choose, you can follow the gravel route down around the belly of the pond, past the Japanese style tea hut, a place of mediation by day and dalliance by dark, toward the Mill River where the landscape shifts from open country to a wooded trail flanking the river.

In “Walking,” Thoreau wrote: “I cannot preserve my health and spirits unless I spend four hours a day at least . . . sauntering through the woods and over the hills and fields absolutely free from all worldly engagements.” Until recently, I was in complete agreement. Daily walks to the pond released words confined by drywall and keyboard, thoughts syncing to the rush of April floods or the ease of summer’s gentle hazel green current. I catalogued the glide of a small blue heron, its gravity defying, splash-free river landing and its high-kneed, tentative steps through shallow water, like a woman in a long dress trying to keep her hem dry. I pondered the ineffable; head tilted way back to look up through layers of sunlit leaves at a sky so blue it makes you wonder if just breathing in this saturated color could solve humanity’s problems. 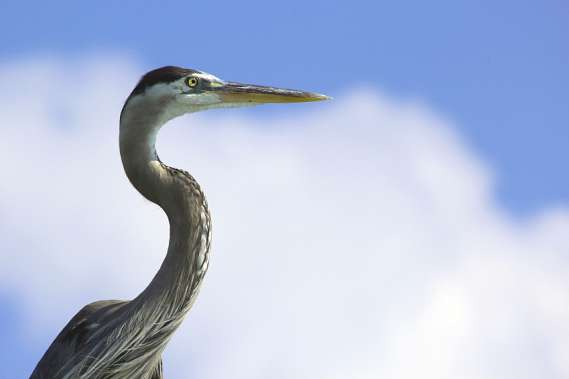 Then I stopped going. First it was the report of bears foraging for spring meals. I have a friend who tracks black bears. He knows their ways, how to be silent enough and when to retreat. I have no bear vocabulary, verbal or social, so I avoid their company. Then there were the biting insects of all kinds, hatched in the heat of the steady wet days that have made this summer its own unique self. The threat of the West Nile and EEE viruses passed by leggy mosquitoes seemed to be the last straw.  But my real fear was a random encounter with male bipedal mammals, the kind that wield guns and knives, the ones with an insatiable appetite for violence.

The news of death traveled quickly to my desk. She was 24 years old, the same age as my daughter; a man killed her with a knife. Abducted in the city, her body was left in a park. The pictures of her, the man, the town where she grew up—not far from here—bombarded electronic screens of all sizes. As a psychologist, I understand the ways in which vivid images make a strong impression on us, even if the likelihood of repeat tragedy is low. We tend to remember those pictures and act on the imagined consequences. 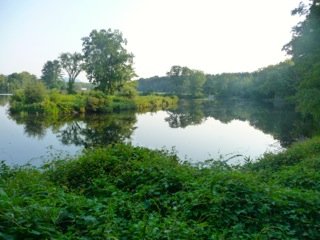 My return to the trail was a fluke. On my way home from my office, located near the botanical gardens, I stopped at the top of the path on Paradise Road. As the walkway curved, leading to the woods, I had to make a choice—leave at the first exit just beyond the tea hut or go on, alone, female, and vulnerable. I do not know why I chose to continue, even with the threat of storm in the clouds and unknown danger lurking ahead and in my mind. Some island of awareness had calved from the iceberg of my unconscious and floated downstream. Anxiety fueled quick steps, sharp breath, and stiff muscles propelled me forward. Despite good advice to ditch the headphones when on high alert, I kept mine on for distraction’s sake, with Josh Ritter’s soulful voice singing “Girl in the War” to me: “The only thing left to do is turn up the music and pray that she makes it through.” 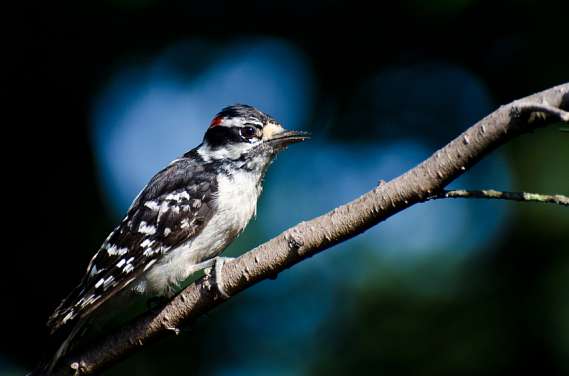 I moved quickly with no stops for ethereal musings until a black and white Downy Woodpecker landed on a low branch close enough for me touch. This delicate bird trusted me. A marvel! How could I resist such an invitation to gain its acquaintance?  Accepting the offer, I paused to watch it poke through ragged layers of a jagged tree trunk. Unimpressed, the woodpecker looked at me and flew on, sampling five more flavors of bark before finding one it liked. Satisfied at last, it started beating its beak against the wall. The woodpecker was done with our visit so I walked on, a bit slower now.

A set of squared off boulders act as guardians to the next section of the river where dogs and people alike play on stony beaches. In a “truth is stranger than fiction” moment I saw a toddler in the distance run across the path, a tow headed, adorable boy, the kind of child you stare at just for the pleasure of watching their pleasure. A man entered the scene, chasing after the giggling toddler. Back and forth across the path they ran, so many times I lost count. When I caught up to these two bipedal male mammals, they were hugging, laughing, and waving to me. A different species than the one I was imagining? Perhaps. Yet, I should have known better. I have a son and a husband, both gentle and kind. 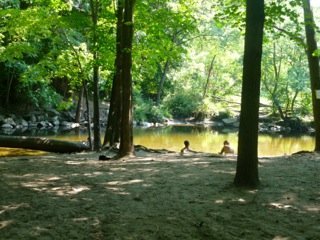 Around the bend from the boy and man is my praying tree. Felled in a storm, its large trunk and limbs sprawl across the trail and its wide branches spread toward the river like a person kneeling on a prayer rug. This is where I come when I need a shot of the divine. I was glad I had made the journey, to arrive here, where I needed to be. It was as Thoreau said, nature’s ability to direct me “aright.” But then there is self-determination and the willingness to lift the veil of evil impeding our view of paradise, to see the good of humanity in our mind’s eye, and on the road in front of us.

*Thoreau’s essay “Walking” is available online from The Atlantic: http://www.theatlantic.com/magazine/archive/1862/06/walking/304674/