Why Did the Bear Cross the Road? 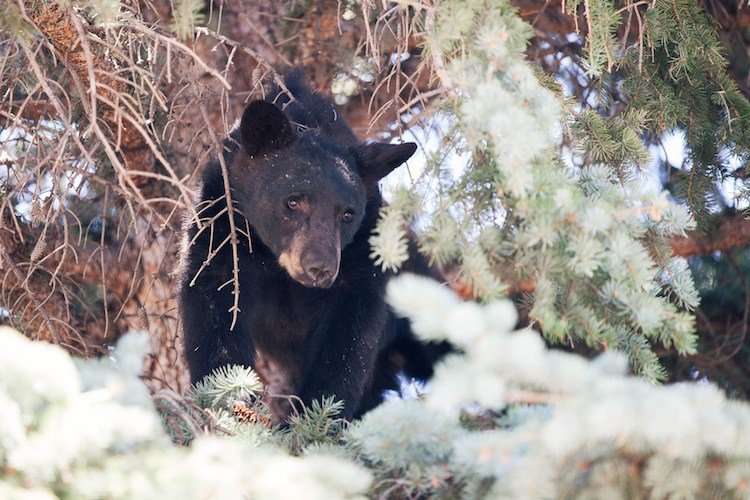 It was about 7:00 pm when I arrived in downtown Boulder, Colorado, in late June of 2017. A crowd of people stood around an area where police tape cordoned off the majority of 16th Street between Pearl and Spruce. I stopped for a moment to digest the scene, then quickly dipped under the tape after determining where I needed to go. As I greeted the wildlife officers and volunteers, I peered up into a tree and found what I was looking for: a two-year-old black bear nervously pacing around. 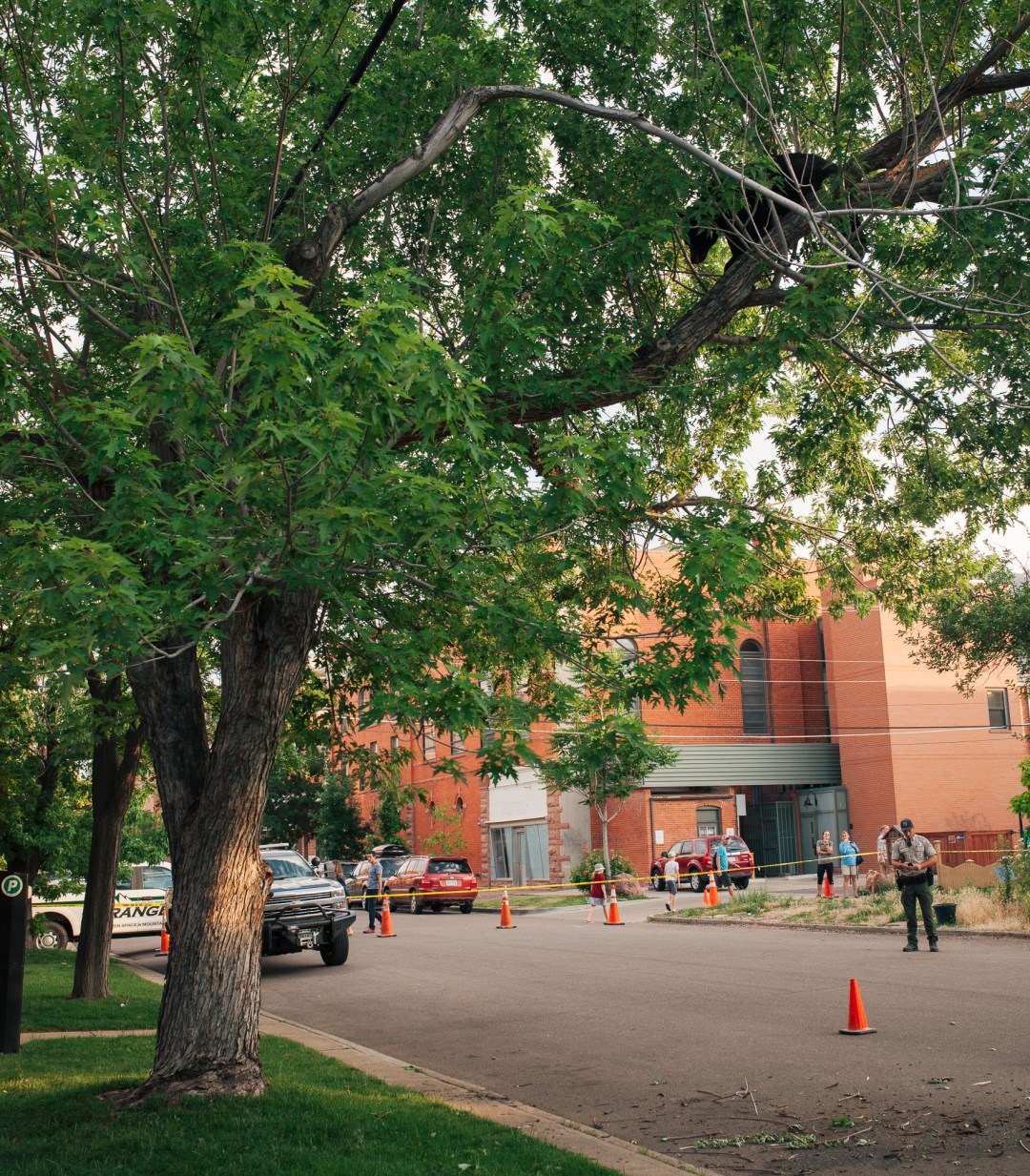 This bear was having a very bad day. He was going on his fourteenth hour stuck in a tree, surrounded by humans, when he should have been in the foothills spending roughly that same amount of time foraging for the 20,000 daily calories he needed to consume in preparation for winter hibernation. Because of the location of this tree (one block north of the bustling Pearl Street Mall) and an article posted by the Daily Camera newspaper that shared the bear’s whereabouts, hundreds of bystanders had made their way to the area throughout the day so they could catch a glimpse of this anxious bear. 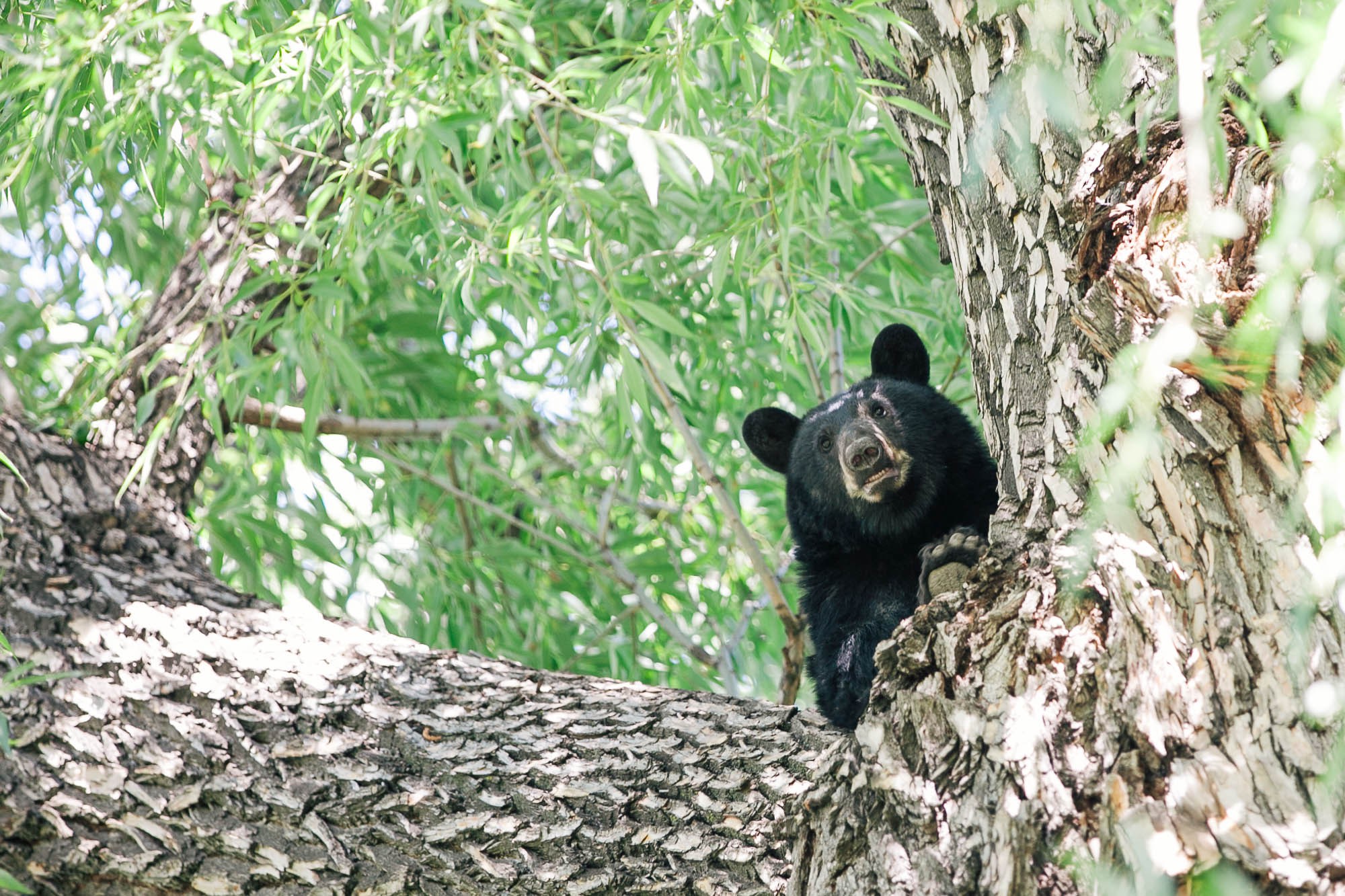 I was there as a Colorado Parks and Wildlife volunteer bearsitter (think: bear babysitter). My job was to keep the bear in the tree until the sun went down, educate bystanders, and to assist with crowd control. I had bearsat numerous times in Boulder’s city limits before, and normally the bears would just snooze the day away in big cozy cottonwood trees that loom over neighborhood homes, bellies full of garbage and other urban attractants like fruit or bird feed. Although it isn’t a good sign for a bear to be in town, there’s truly nothing I love more than watching these big bumbling (yet somehow graceful) omnivores resting peacefully in their treetop perches. 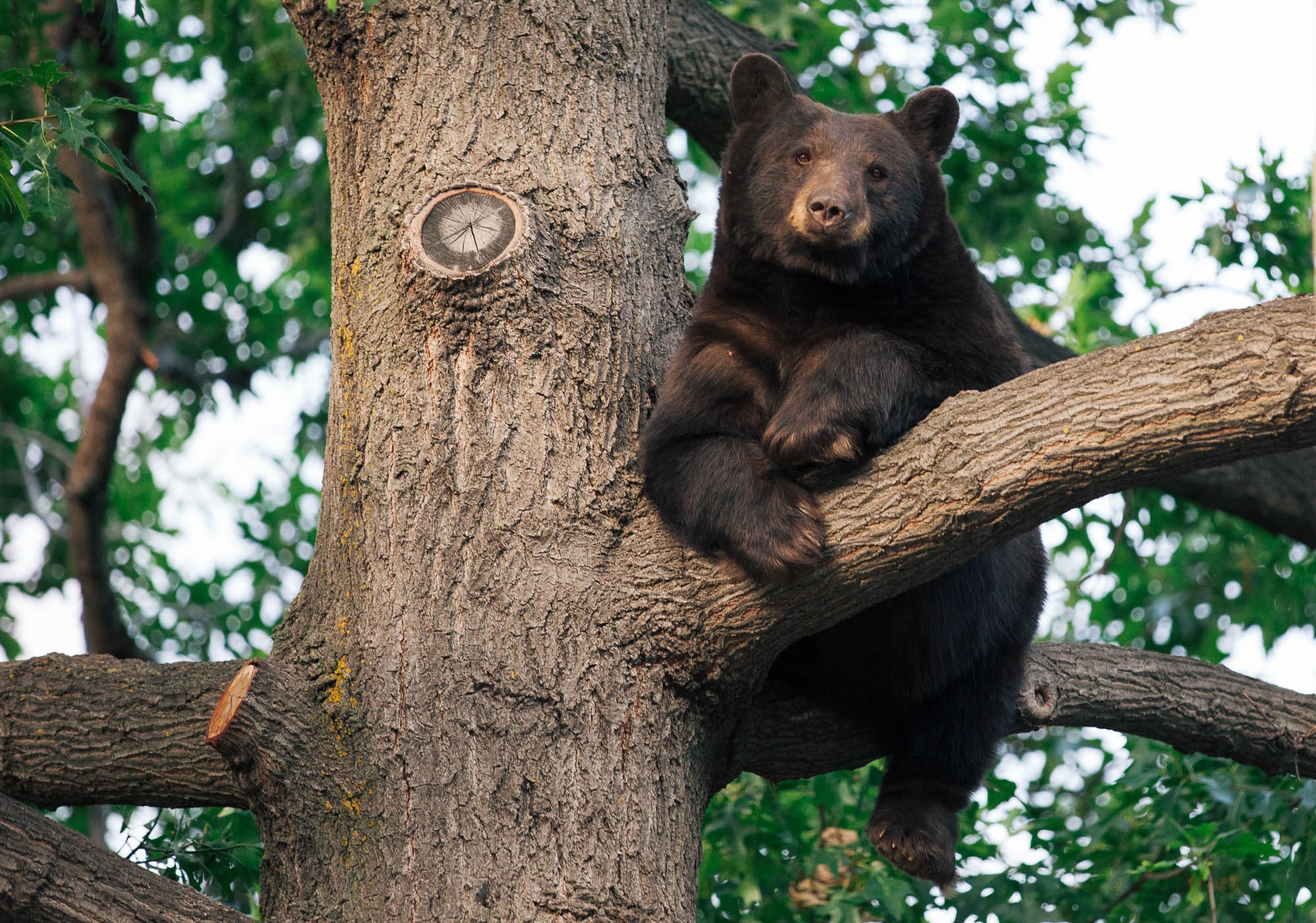 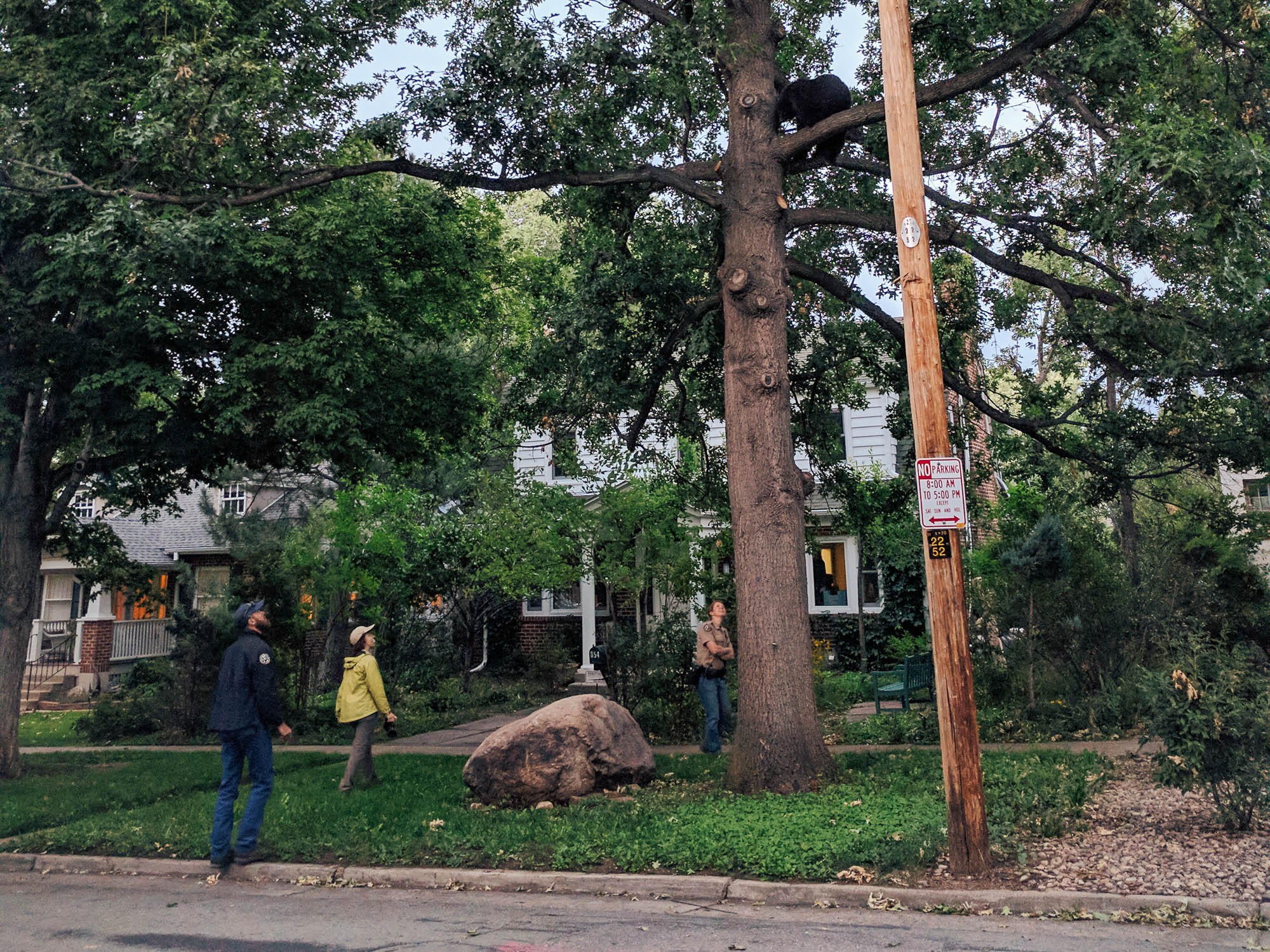 On this specific day, however, I experienced my most challenging bearsitting. A large crowd of people was forming as the bear began to tell us through his behavior that he’d had enough and was ready to come down. People did not understand why we wanted the bear to remain in the tree and yelled things like “Leave the bear alone!” and “Just let the bear come down!” and “Don’t kill the bear!”

Meanwhile, this poor animal was stuck in a tree without any food or water, surrounded by humans, loud noises, and tempting aromas from downtown Boulder restaurants. The frustrated bear began moaning loudly over and over, which in turn made me want to cry. We wanted to let the bear come down, but how could we do that with all these people gathered around? Didn’t they realize that if they simply left, we could let the bear go without harm to them or the bear? 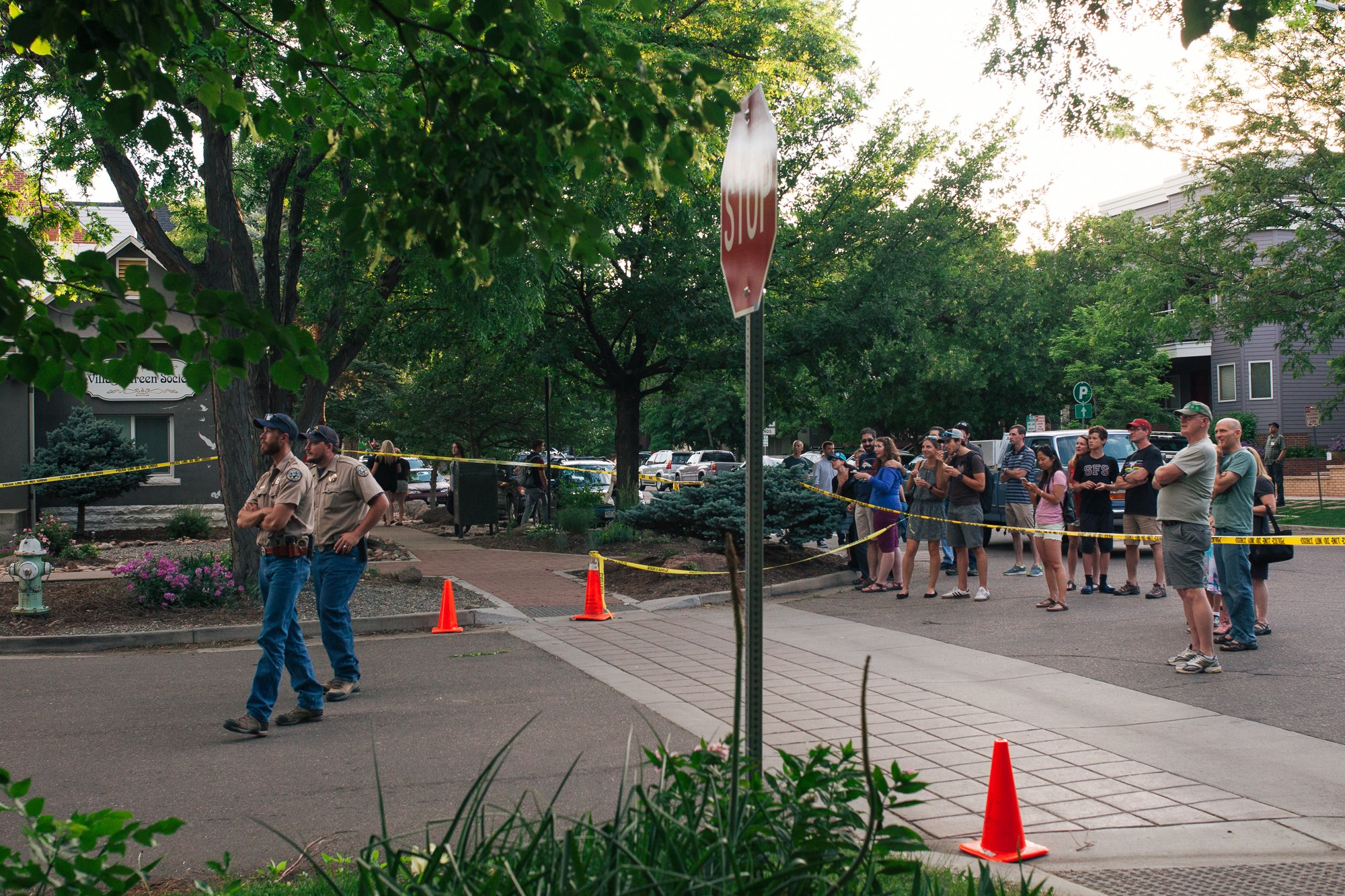 There were numerous concerns to consider. For instance, with all the bystanders, he might run into someone and act aggressively, which could require the authorities to take lethal action. Or maybe he would be struck by a car as he tried to cross several busy intersections on his way back to the mountains. We were simply trying to prevent any of these negative scenarios from taking place.

In the end, the bear made his way down the tree, nearly ran into a group of adamantly curious people who weren’t too keen on moving, dodged two cars, and wound up back in a tree a few blocks further east into town. Because it was dark out and most people hadn’t seen where the bear ran, the wildlife officers decided we should leave the bear alone so he could come down on his own. Our hope was that this horrible day would leave quite an impression on the young bear and encourage him to steer clear of Boulder’s urban areas in the future. 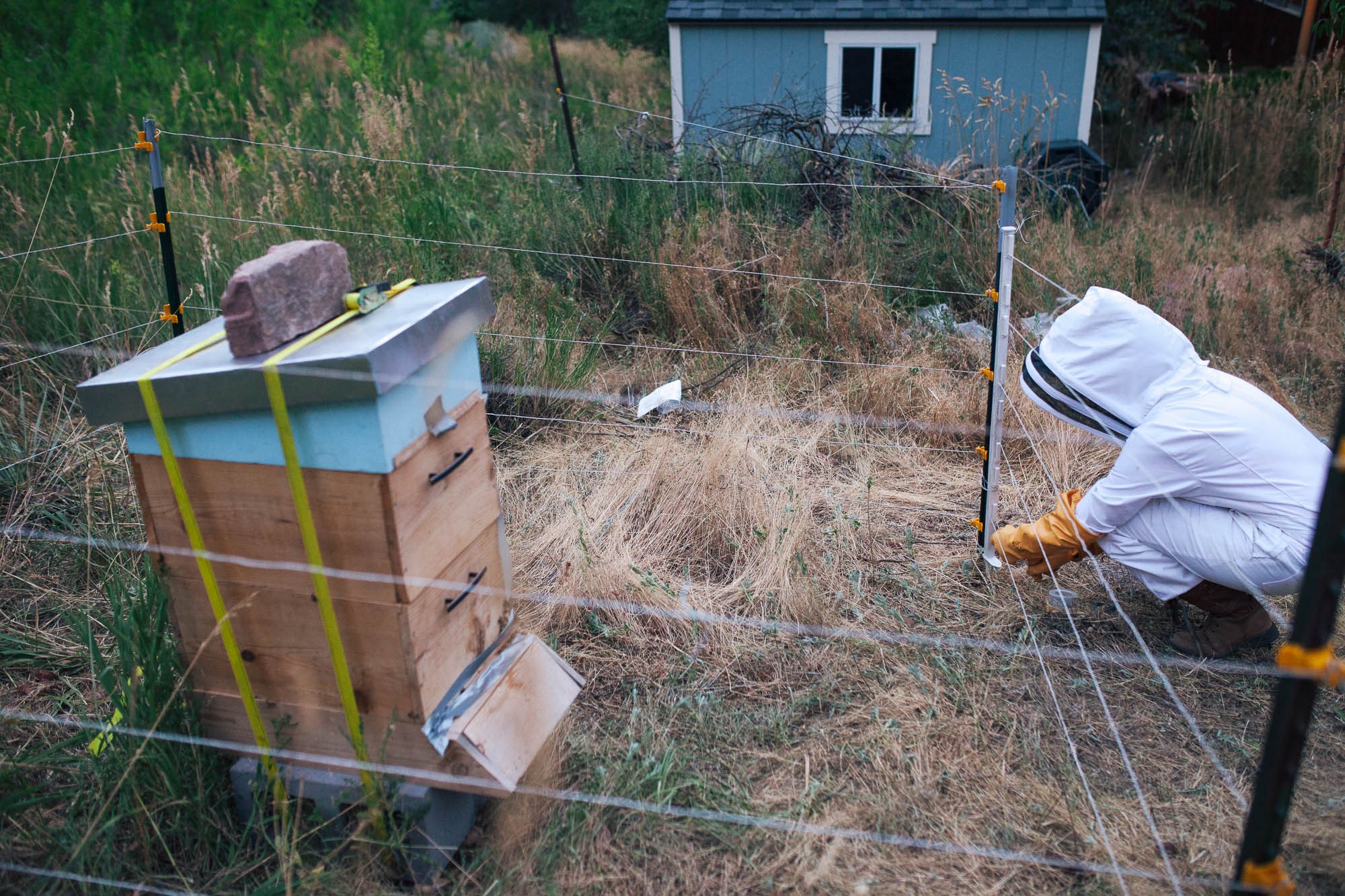 Scenarios such as the one I’ve described are usually followed by many opinions. Common topics tend to be about “problem” bears, letting nature be nature, or wildlife managers being bear killers, but what I think needs to be talked about more is personal responsibility. This bear came into the city because he was hungry—not because he wanted to create problems or pose threats—and wildlife officers were there to protect not just the bear but the people, too. And all of this happened because we humans essentially rolled out a red carpet for the bear and invited him into town to dine on our unsecured trash and compost, our unharvested fruit trees, our bird feeders, and our backyard beehives and chicken coops. 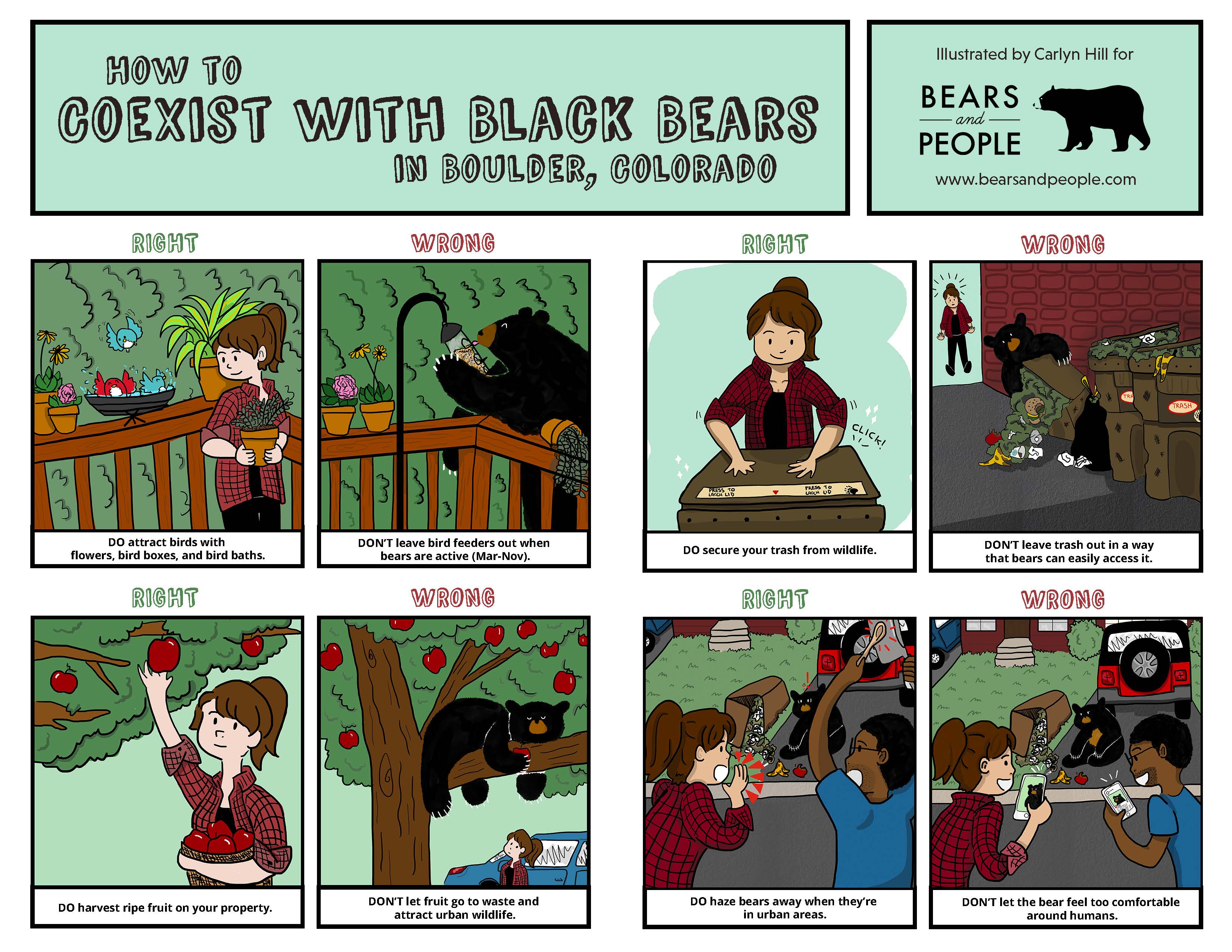 This isn’t a wildlife problem. It’s a people problem. And, it’s a problem that many people in Boulder’s growing community are not even aware of. We’re living in a time of information overload and lost connections to nature, and, as a result, it’s a major challenge to get people to take an interest in matters like black bear coexistence or land conservation. But as human populations continue to increase, our landscapes change, too, with wild spaces becoming less abundant. As a result, conflicts with wildlife continue to grow as human communities move further into wild habitats. 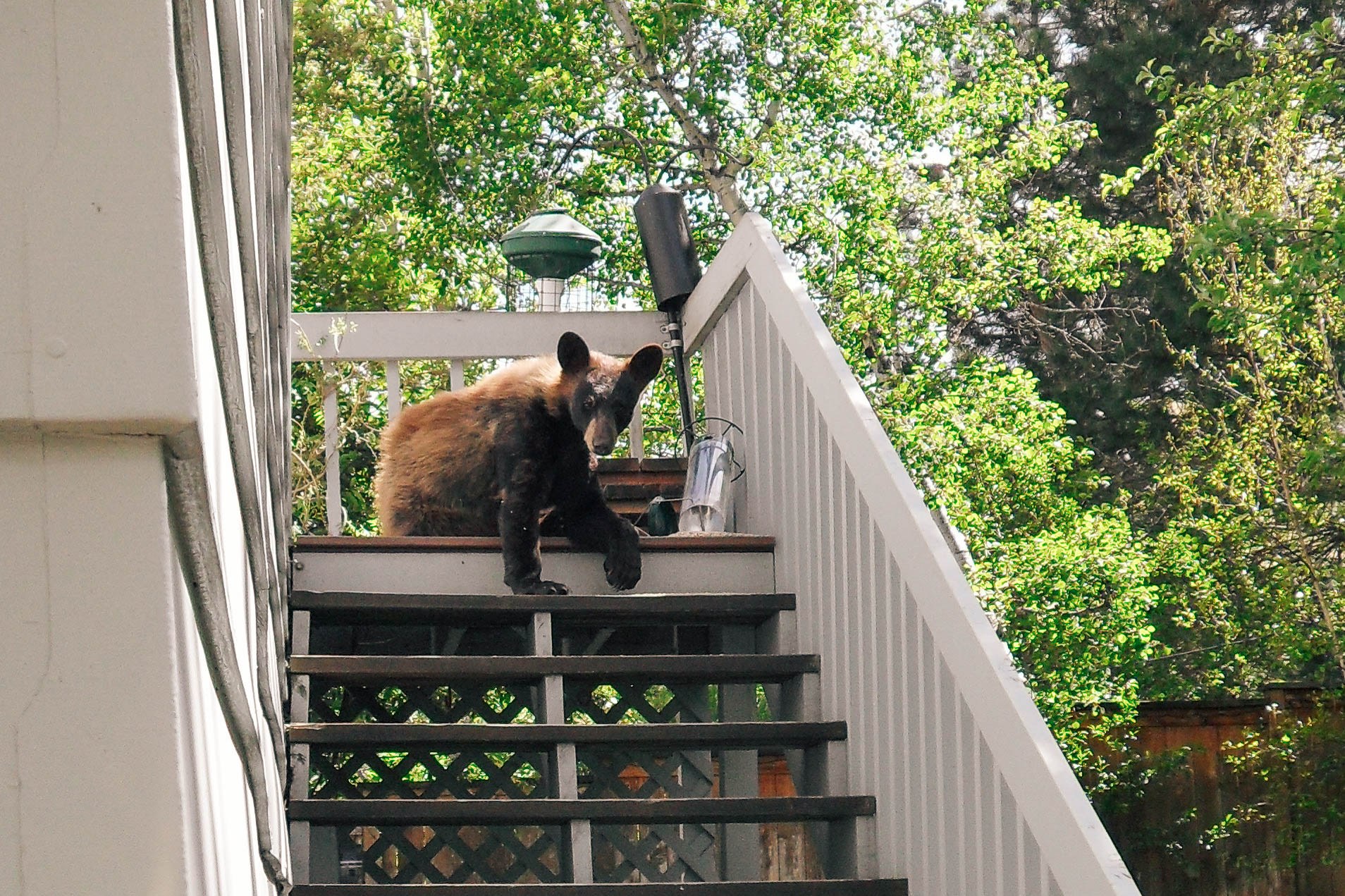 We are all responsible for the wellbeing of our wild neighbors. It shouldn’t be up to any one agency or organization to solve our problems with urban wildlife. A collaborative effort is needed, in which the community is right in the center of it all.

In Boulder, we’re fortunate to have a community and governing body that takes pride in our wildlife and open spaces. Along with our one-of-a-kind bearsitter volunteer program, the city implemented a Bear Protection Ordinance in 2014 that requires all households and businesses located in an area at the base of the foothills to use bear-resistant trash and compost canisters. 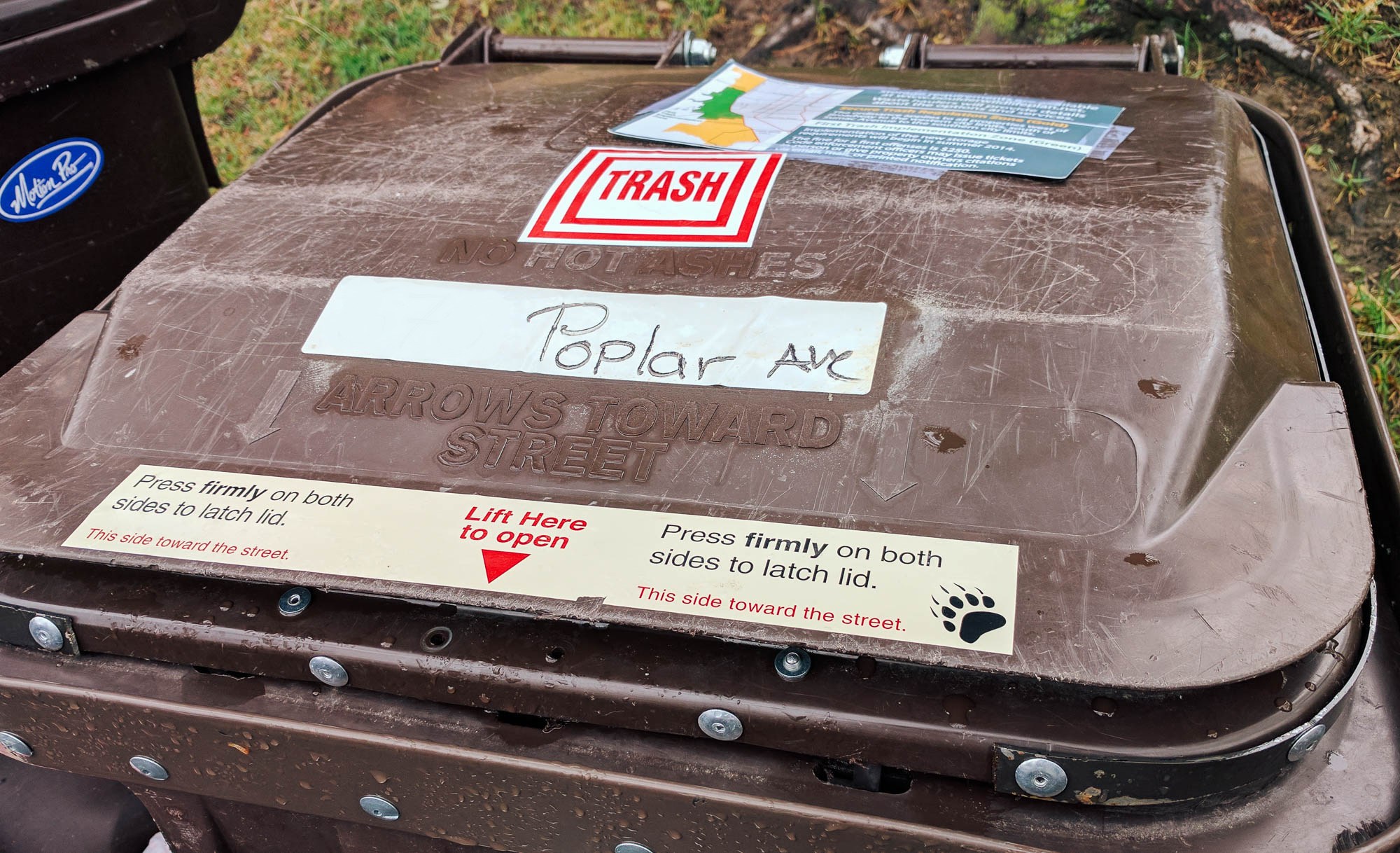 Wildlife ordinances and programs like Boulder’s are a luxury that not all municipalities can afford. They can be extremely efficient in reducing human-bear conflicts, but only if each of us adopts an active role and fully complies with the requirements. Regardless of if there is or isn’t a policy in place, the solution remains the same: remove the reasons bears come into town and don’t let them feel comfortable around humans. According to a recent study in Durango, Colorado, far fewer conflicts occurred in neighborhoods where at least 60% of the city’s households properly secured their trash. 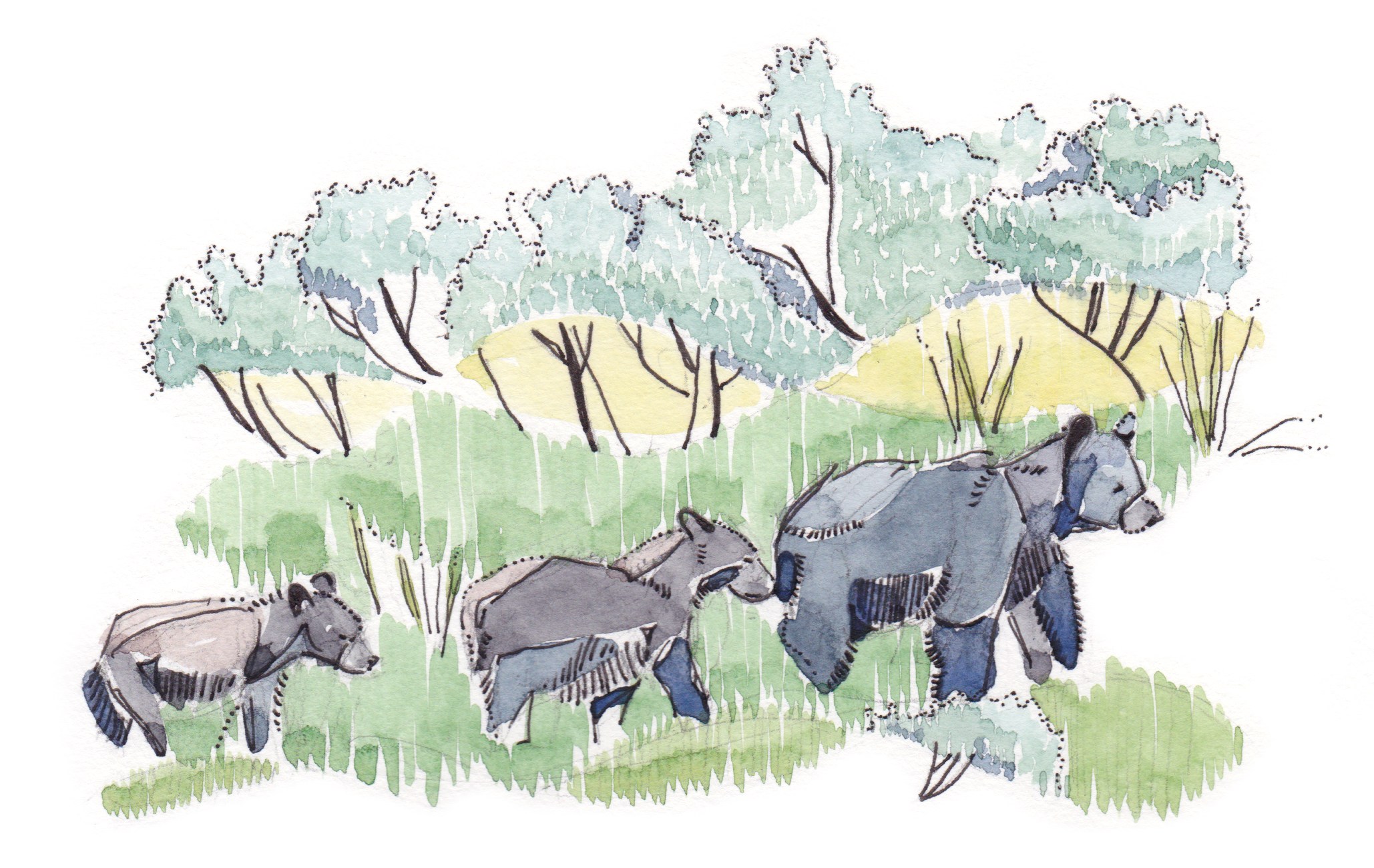 It truly takes a village to coexist with large carnivores like black bears. If we don’t do our part, bears that become habituated to urban life may no longer fear humans, which can lead to the euthanization of bears, or injuries to—even the death of—a person.

We have the power to minimize conflict between humans and urban wildlife. We need to be proactive and encourage those around us to do the same. I love bearsitting. But I’d rather not have to do it. I look forward to a future in which being a good neighbor includes no more bad bear days.

As part of her Master’s thesis from the University of Colorado Boulder, Melanie created the Bears & People Project. Although the project focuses on coexistence with black bears in Boulder, Colorado, this story can be applied to other species, places, and communities. See how you can safeguard urban bears and keep your community safe by visiting www.bearsandpeople.com for more info.