All the Wild Horses 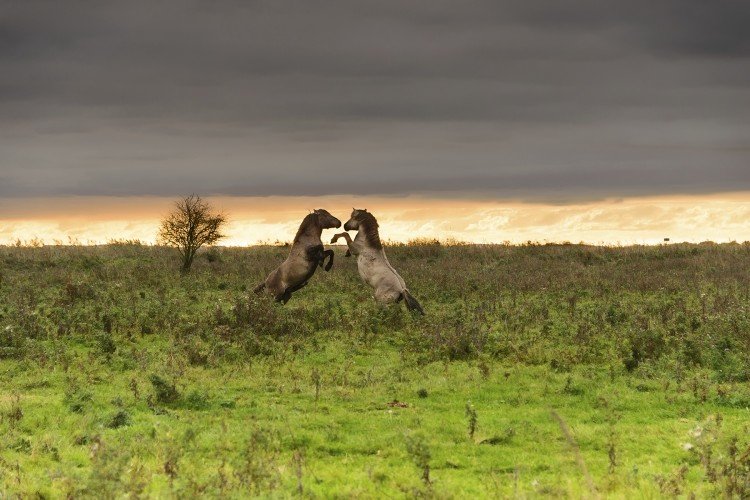 Last September, at the tail end of a long summer, I had the opportunity to take part in a guided visit to the Oostvaardersplassen, a 6,000-hectare nature reserve to the east of Amsterdam. What made this opportunity unique is that nature is largely left to its own devices at the Oostvaardersplassen. Although the area is owned and managed by the Dutch State Forestry Commission, the site is closed off to the public, and the large herbivores that live there—red deer, Heck cattle, and konik horses—are considered wild animals.

Our group arrived at the Oostvaardersplassen visitors centre at around five o’clock and after tea and coffee and a presentation on the history of the area, we were driven onto the site in a tractor-trailer. The sun was still bright in the sky and tall reeds lined the bumpy road. I sat back on the wooden bench and enjoyed the sudden relief of cool air after a long, busy day. We rode for a while and the sides of the track opened out. We could see across expanses of polder where swans swam white against blue in the drainage ditches.

Eventually we stopped at the edge of another expanse of grass, through which a mud path crossed and then petered out as it approached the herd of konik horses. We all got off the tractor-trailer and were told to stay together in a group as we made our approach. We walked over slowly and stopped at a respectable distance, perhaps fifty metres away. And then, a strange and wonderful thing happened. Far from being afraid and wanting to flee, as I had expected, the horses were curious. They started to walk towards us and gradually gathered around in clusters. They were so close we could see the variations of grey in their hair, their messy, tangled manes, and the dark scars inflicted by other horses during fights. We could also see their large watchful eyes, behind which a rich inner life appeared to brim. 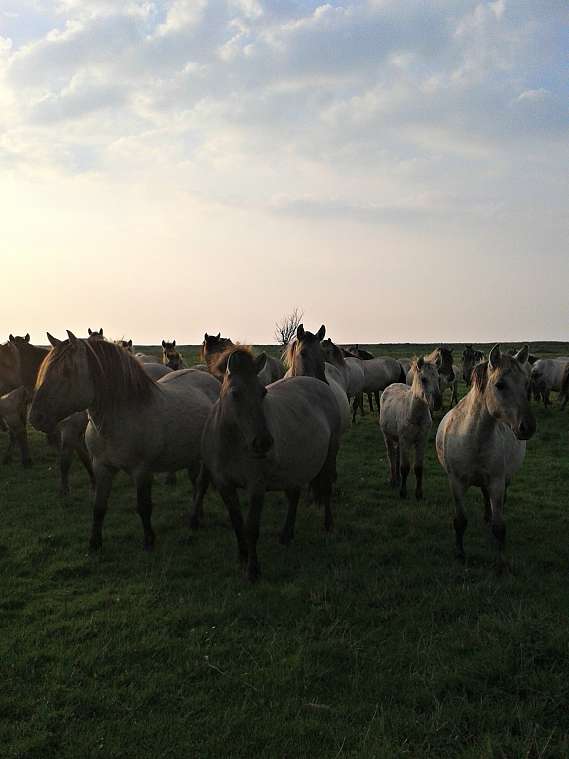 I’ve never had much interest in horses. I’ve petted a few on walks through the countryside, but they’ve never really held much sway over my imagination. I can take them or leave them, and I’ve always had the impression that horses feel much the same way about me. The wild horses in the Oostvaardersplassen were different. They looked at us in a way that suggested they could comprehend more than their own basic interests. These horses are not fed by humans, and so they weren’t interested in us because we might have food. They didn’t expect anything in return. They simply wanted to observe us, the way we were observing them.

After a while, dusk fell and the horses lost interest. Two stallions fought, rearing up on their hind legs. The groups that clustered around us dispersed and wandered away, and after around forty minutes in the field, the humans did likewise. 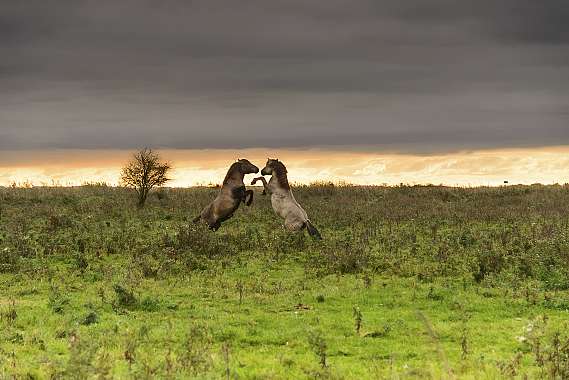 We passed out of one another’s lives as quickly as we had arrived and yet I haven’t been able to shake off that encounter. Not only is the image of those beautiful horses imprinted in my mind, it also made me question my understanding of what it means for an animal to be wild.

The word “wild” used to make me think of a lone animal, stalking an empty landscape—as though loneliness were the ultimate antidote to civility—but the horses of the Oostvaardersplassen lead a communal life, lived among family. Familial bonds weren’t something I had ever associated with the notion of “wild” before, yet we saw horses of all ages and sizes. The young foals sheltered themselves behind the older ones, an act that demonstrates a relationship of trust. The thought that wild animals might be more dependent on such relationships than their domesticated counterparts was brought home to me a few days later, during a cycle ride through the countryside, when I passed a field of horses. The horses were wearing head collars and blankets and they didn’t even look up as I cycled by. They seemed lonely and stood at opposite ends of the field, as though they barely noticed the other horses.

In the long essay Walking, Thoreau writes, “Give me a wildness whose glance no civilization can endure.” I remember reading those words for the first time and immediately jotting them down. They are powerful words that have the odour of the wolf about them and seem to beat in the mind like a drum. But as we stood in front of the wild horses of the Oostvaardersplassen, the only thing either horse or human seemed capable of was looking. We did more than glance at one another. We were transfixed. Thoreau’s notion of the wild is an enticing one, but the Oostvaardersplassen shows that perhaps it is possible for human civilization and wildness to endure together. The konik horses live a mere forty kilometres from my home in Amsterdam and I marveled at this as we stood looking at one another. Suddenly, Thoreau’s wildness seemed less enticing.

When the national debates about the Oostvaardersplassen were at their height, the Dutch television channel Een Vaandag, broadcast footage of the Oostvaardersplassen, which showed dead and dying animals in the reserve. The footage is still available to watch online and it is distressing viewing. Whether the levels of die-off are natural or not (and no one seems to agree on the figures), death tugs at the heart and the impulse to do something, to intervene, is strong. Empathy for the suffering of animals is a good thing; it is this empathy that leads many people to dedicate their lives to protecting and conserving them. But as many pointed out during our visit and the discussions afterwards, perhaps the right to live free is inseparable from the right to die free. Perhaps empathy isn’t that useful if it prevents us from seeing beyond our human context. After all, whatever a truly free, truly wild animal might look like, I suspect it probably won’t conform to our—or my—own anthropomorphic expectations.

That evening, after dinner at the visitors centre, we piled into the coach and drove back to the city. I nodded off to sleep, surrounded by the low hum of the radio and the mumble of conversations, as deep pools of darkness and scatterings of light filled the growing miles between us and the Oostvaardersplassen—between us and the konik horses, which even now gallop through my mind, stamping their hooves and braying, plumes of hot breath rising into the night air. In Wanderlust Rebecca Solnit writes that the places you love and know well “give you yourself back.” Perhaps the same is true for wild horses. 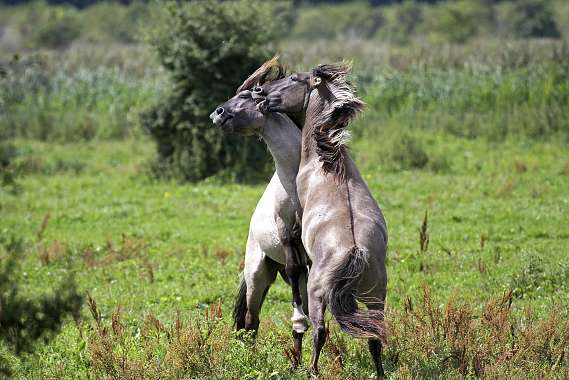