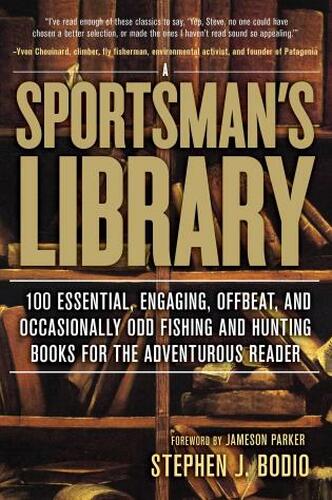 “Elizabeth Thomas went to live among the Bushmen of the Kalahari in 1948 when she was still a young girl, and lived an enviable double life in two of the best human realms: that of the Neolithic hunter-gatherer, the Old Way, and that of a civilized Western intellectual. She went on to write a remarkable number of good books . . .”

So begins one of the hundred brilliant little essays inside A Sportsman’s Library, Stephen Bodio’s own remarkable excursion down the rich Silk Road of outdoor literature. As a tour guide he possesses qualifications not so unlike those of Elizabeth Thomas—on the one hand a lifelong falconer, fly-fisher, bird dog man, and game gourmand, on the other a ravenous bibliophile who, like his friend Tom McGuane, plows through books “like a son-of-a-bitch.”

To the cognoscenti Bodio will always be known as the originator of the modern outdoor book review, in much the way McGuane “invented” the modern outdoor essay. By his own reckoning, “Bodio’s Review,” in the early, pre-corporate Gray’s Sporting Journal, still threatens to eclipse his own actual body of work—books ranging from falcons to Mongolian adventure travel to wrenching, elegiac memoir.

It’s understandable, in a way. His schizoid tastes elevated those Gray’s musings to something more of a piece with Harper’s than Outdoor Life. In the post-Vietnam suburban dark days, the henpecked minority who still loved both to read real books and chase actual wild game undoubtedly found him a godsend, a guy who could quote “The Waste Land” while crouching on a sandbar gunning waterfowl. It was nothing to read a critique of a Jim Harrison novel, or an Ed Abbey collection, even a book on catfish, and encounter references to Nabokov or Woody Allen or Mission of Burma, in twists and turns akin to the mysterious alleys of a souk, every corner a wonder.

This book is that and more, covering literally the entire historical arc not merely of outdoor writing, but of published writing, period. It begins, as they say, at the beginning. The two earliest texts, on falconry and angling, date to the Medieval. From that point of departure proceeds an eight-century pilgrimage, scattershot-fashion, through the glittering variations of humanity’s most basic psychic fixation—the necessity to chase and catch and kill something to eat, and the evolution of this over time into ritual and ceremony and finally, in some cases, outright lunacy.

Dispense with any notion of eye-rolling hook-and-bullet hokum. Bodio from the introduction: “You may well be surprised (but I hope entertained) to see how wide a net I cast. My choices include a comic book . . . terrifying narratives about man-eating beasts . . . timeless advice on how to catch rats, the latest theories on Paleolithic cave painting, and a postmodern collection of dead elephant photographs first hung in a gallery in Manhattan. Fishing poetry by a former poet laureate of England . . . ”

Imagine E.B. White and Aldo Leopold conspiring on a Norton Guide to Rod-and-Gun Lit, with color commentary from Hunter Thompson. You’ll about have it.

Like I said, schizoid, but also utterly coherent, and pointing at heart to the now-legendary era in which Bodio the writer cut his teeth. From his essay on McGuane’s Ninety-Two in the Shade: “In the early 1970s, Thomas McGuane gave me and many other young writers the keys to the highway. . . . Instead of being a chronicler of suburban angst, suddenly you might cast a line, shoot a rifle, train dogs, read European novelists, journey to strange places, and be unabashedly, even arrogantly literate.” Bodio, a working-class New Englander by birth, evidently took the new rebellion to heart—elsewhere in the book he admits to a booze-fueled piss on John Updike’s suburban lawn, in reaction to the great writer’s lily-livered New Yorker review of a classic Russian naturalist’s log.

The essays become in exactly that way unavoidably personal because the author has such genuine passion for his subjects. Like any writer worth his salt, Bodio is himself a citizen of the world, cogitating by turns on everything from the class warfare surrounding modern British foxhunting (In the Pink), to his own unabashed enthusiasm for the archetypal, stiff-lipped Brit adventurer Denys Finch Hatton (the Robert Redford character in the film Out of Africa).

He mulls the downsides of Utopian dreams and schemes on the one hand (The Tender Carnivore and the Sacred Game), while celebrating on the other the social laser beam of surrealist fable (Robert F. Jones’ cult-classic Blood Sport).

If Bodio himself becomes the unifying figure, the cast of characters on the road beside him is nothing short of staggering: rogues and royals and working-class stiffs, writers and scholars, cowboys and commies and Comanche Indians. Many of his selected writers are women—Dame Juliana Berners angling in England in 1486; Karen Blixen hunting Kenya in 1938; Rebecca K. O’Connor writing lyrically and brilliantly on the art of falconry, which must seem really esoteric in her native Southern California. Curious pilgrims all, on the same long and winding journey out of and simultaneously back toward our own evolutionary origins.

Not long ago a book-loving, utterly urban female friend reflexively termed autumn “the killing season” with equal parts poetry and awe. Twenty years ago I think a person in her position would likely have viewed hunting as a retrograde mix of the gauche and the obscene, but the pendulum has indeed swung. Much of it has to do with renewed interest in food and dismay with modern commercial agriculture. Considerate, hands-on chefs and locavores like Georgia Pellegrini and Steven Rinella (discussed by Bodio) are through the medium of good writing helping to make wild meat and its predator/prey realities if not fashionable, then at least palatable, even intriguing, to the otherwise uninitiated.

True, the cringe-inducing poster children are still with us, and yes, they still predominate—chest-thumpin’, ATV-addled huntin’ shows and tournament bass boats with big-block Hemis and more sponsorship decals than a NASCAR pileup. So in the age of DTV, the timing of A Sportsman’s Library is all the more perfect—Bodio was there before the pendulum swung. When much of the culture had three channels and rabbit ears, he had his books and his bird dogs, and no guilt, shame, or even second thoughts about having been crafted, by God or evolution or both, as a thinking, feeling predator.

“A library that contains every book suggested in this one will afford the dedicated reader a lifetime of reading pleasure,” he writes. “If you read them all, you’ll encounter great novelists and poets, walk in fear in dark forests, learn how a Best gun is made, and add several good recipes to your collection. I hope I have arranged a feast.”