Wildlife Viewing in a Neon City 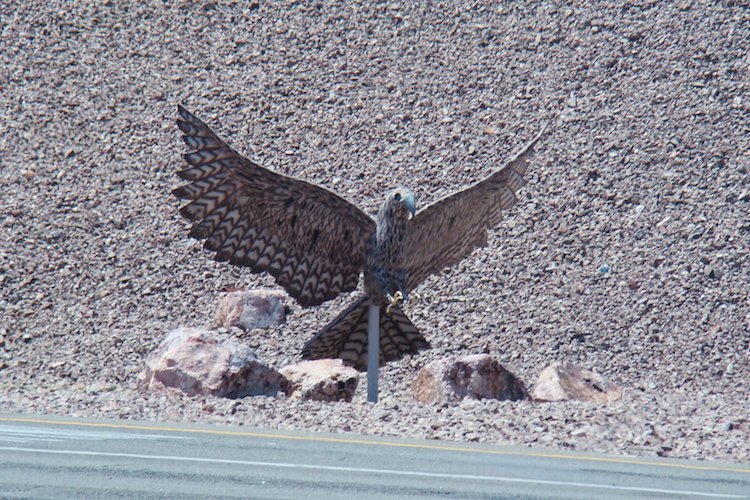 Desert bighorn sheep, stately and huge in stature, guard the scenic byways of southern Nevada. They stand stiffly, seeming larger than life with their gigantic curled horns, tough as metal and ready for battle. Anyone would be daunted by them, knowing that a collision with such an animal would be devastating. Those who see them are taken aback.

It’s usually a joke when people say that you can see wildlife in Las Vegas. But nature enthusiasts know that it’s a fact and can be done without visiting the Las Vegas Strip. For those visitors and residents who tire of the city’s “seedy” side, there are fresh wildlife viewing experiences that await in the major corridors of town. The bighorn sheep are one of these. But why would such dwellers of the desert’s wild areas be in such close proximity to town? This is where nature becomes art and art touches our affinity for the wild. 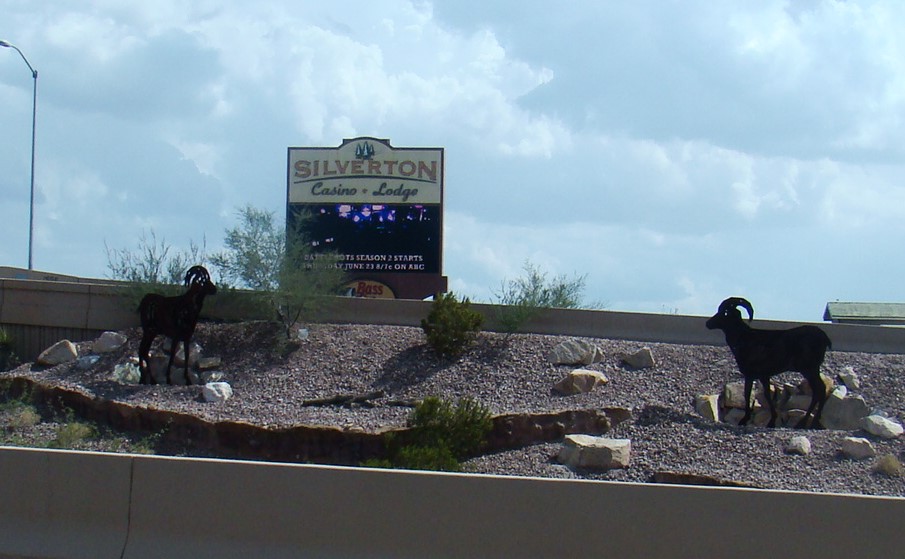 The City of Las Vegas, along with Clark County and the suburbs, has taken to beautifying the freeways around the megalopolis with reminders of where we really live. While the casinos import landscaping to make people believe they are somewhere else—perhaps a lush tropical paradise—the municipalities have opted for more realistic depictions of Mojave Desert plants and wildlife. The practice extends from the freeways into city byways, and now has morphed into a citywide artistic project. Wildlife watching from the car has taken on new meanings. Wildlife viewing and artistic exploration have morphed into one activity, without the risk of roadkill.

The I-15 is now artistic habitat to coyotes, jackrabbits, and snakes, whose images float above the cars, enlivening the overpasses. Giant metal bighorn sheep, burros, and horses greet people at the exit ramps. The “spaghetti bowl,” where the major freeways meet and intertwine, probably contains the most well-known freeway artworks: oversized and galvanized tortoises steal drivers’ attention and please the gawkers. On Highway 95, outside the Las Vegas Springs Preserve, a supersized gila monster, roadrunner, and fox stand out on approximately sixty feet of freeway wall. The 215, going west and north, is decorated with glyphs of native animals. Prickly pear cactus and two-dimensional tortoises can be seen at several exit ramps in town. 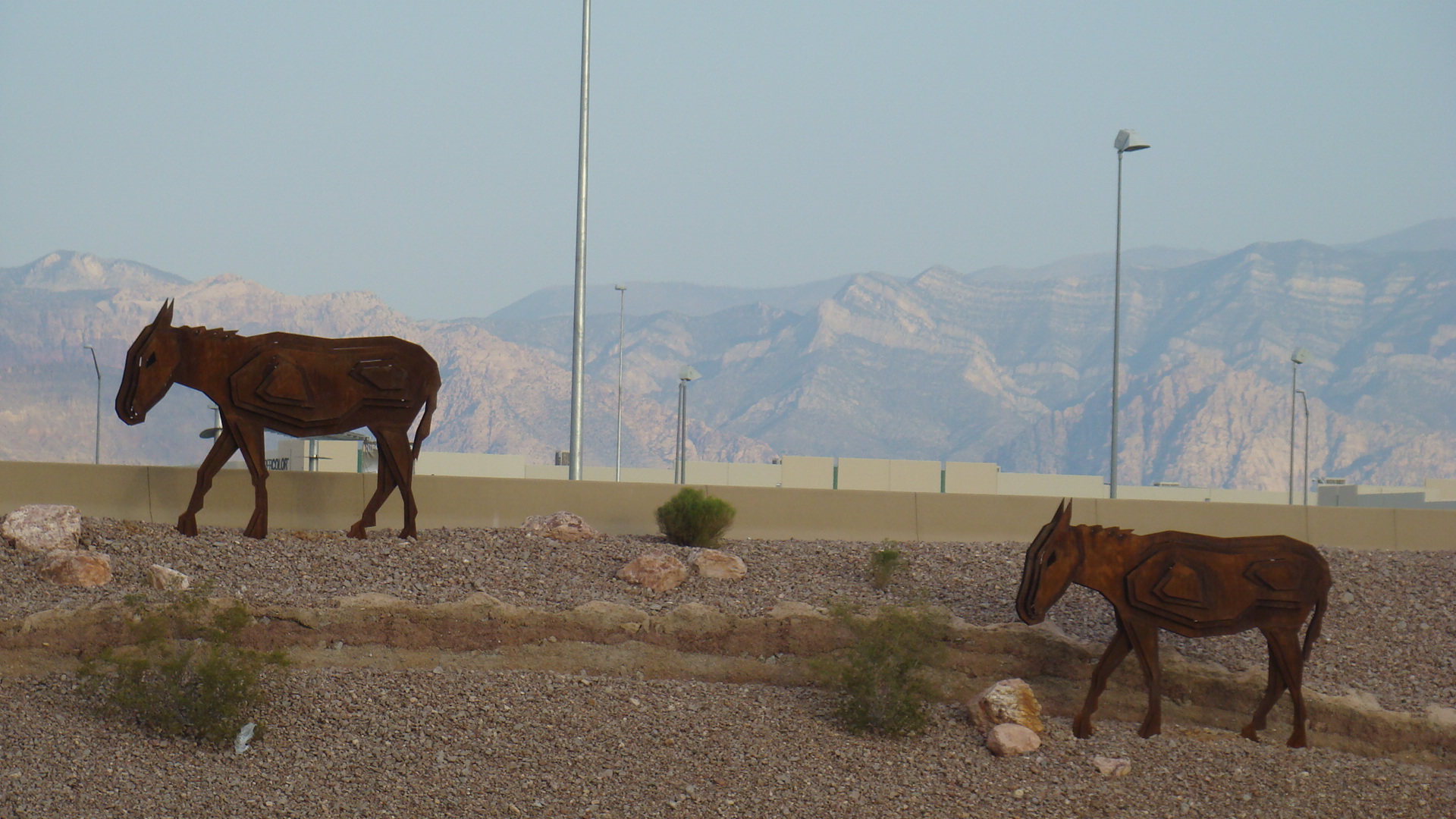 A huge sculptural diorama of painted Joshua trees and birds grace the on/off ramp at the 95 near Flamingo Road. More birds, rendered with painterly care, fly against the pillar supporting the exchange near Sunset Road.  The birds welcome visitors to the Wetlands Park and Bird Viewing Preserve, a precious and lush oasis, appreciated by wildlife and people. 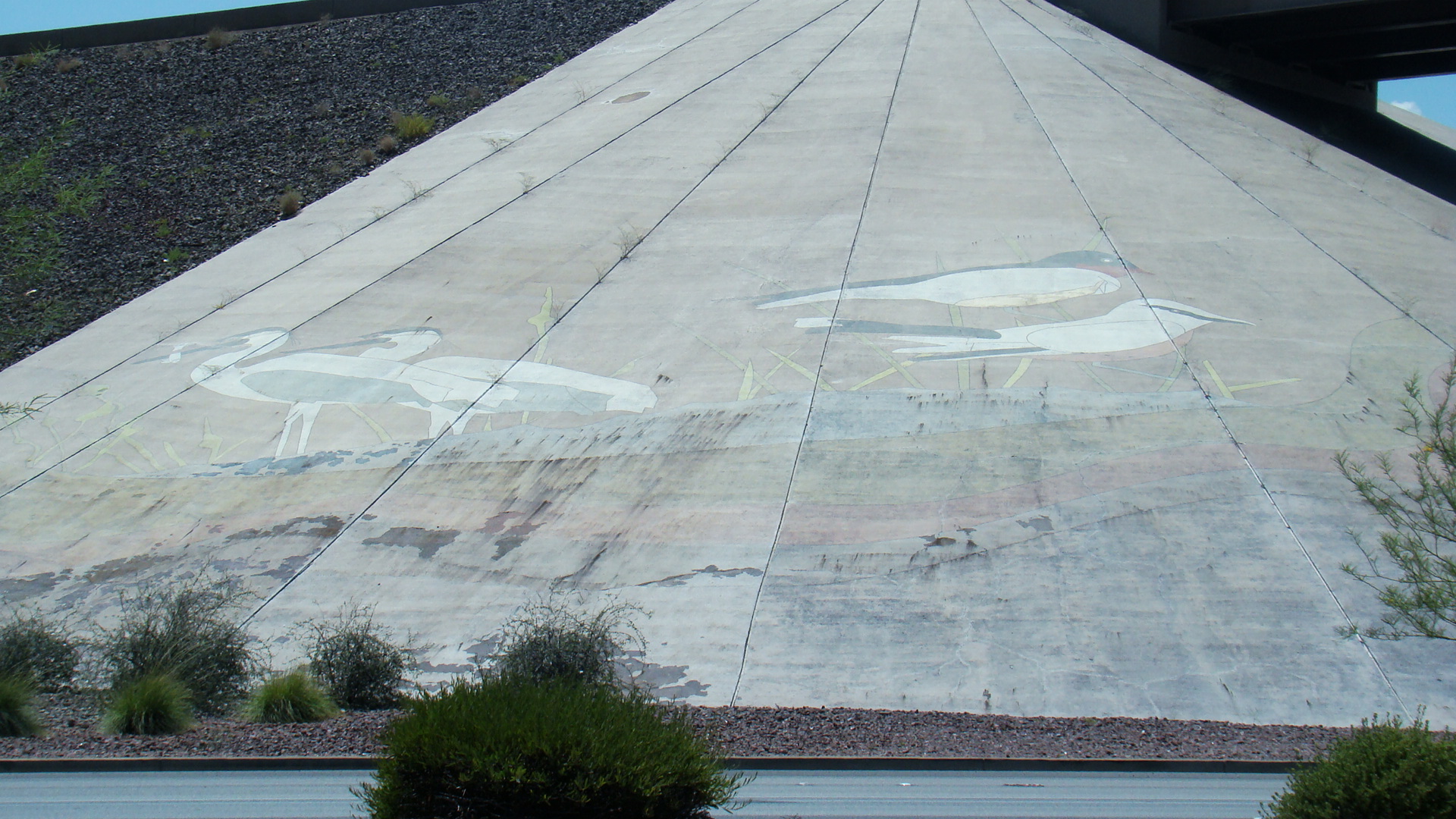 The roadside artwork—markers, sculptures, and drawings—reflects an assortment styles.  Because the funding for each section of road or highway came from a unique source, there was no unity in style or theme, with the exception that the pieces feature native flora and fauna of the Mojave Desert. Some of the funding, for example, came from the national highway beautification project, a program that provides wildflowers for roadsides around the country. However, a roadside wildflower display was not feasible in this hostile habitat, so the advisory committee (of which I was honored to be a member) recommended facsimiles of native plant and animal life instead. 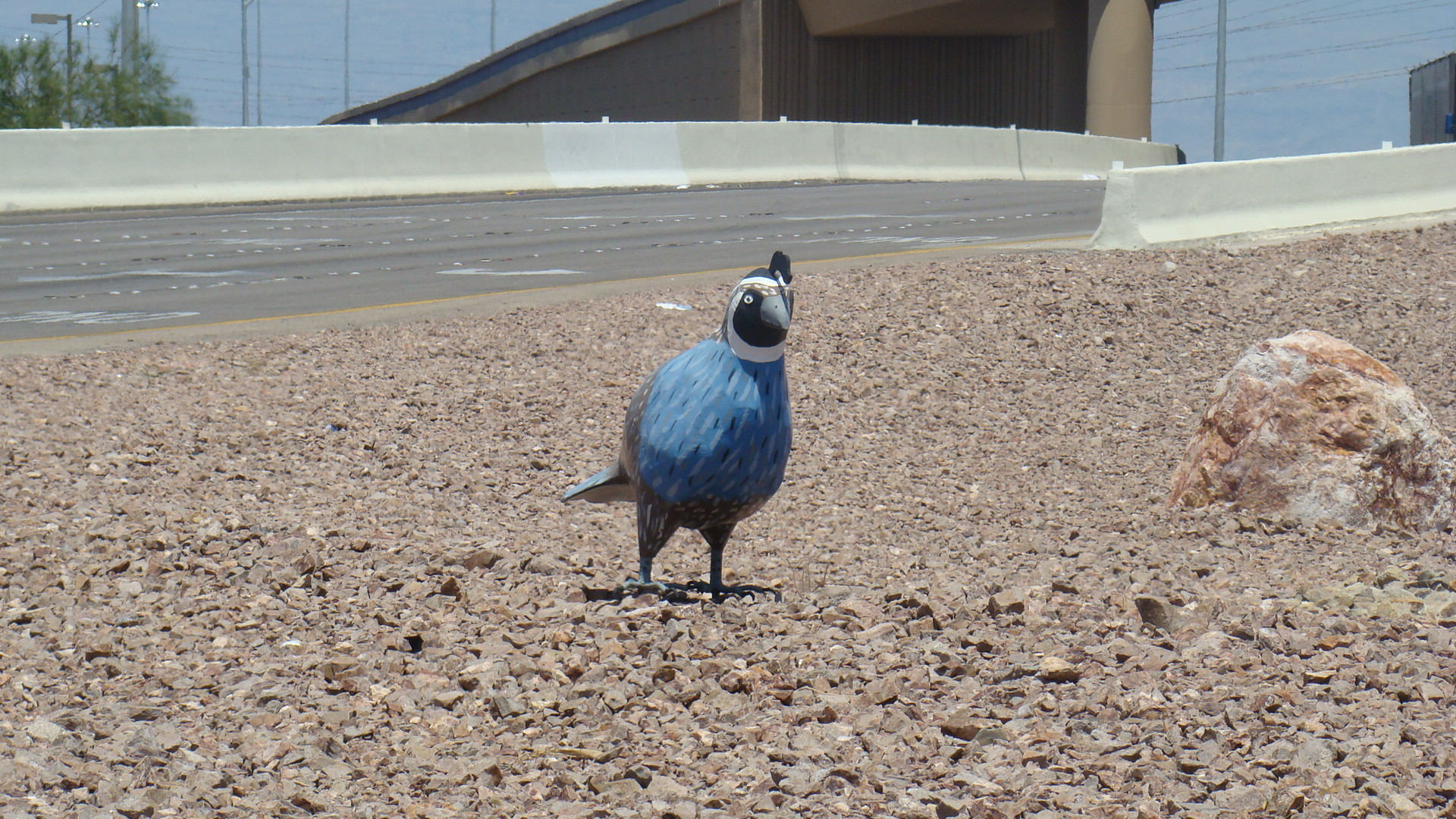 Since I arrived here from a very green and wet place in the Midwest, it has been my quest to learn about and appreciate this unique ecosystem that is the Mojave Desert. I learned that although the desert does not plainly reveal its secrets to the hurried passerby, it actually holds more diverse life forms than more common ecosystems. Most newcomers to this environment don’t know anything about it or else their minds are filled with myths of unrelated exotic locations and over-exaggerated creatures. I’ve spent my career sharing my own discoveries with others, spreading word of the wonders of the desert. So the freeway project seemed to me a good opportunity to do some education.

A conservation ethic can be expressed through local artwork. Seeing the native desert flora and fauna keeps the natural environment on people’s minds. Unfortunately, the benefits of this urban nature experience are largely aesthetic. Finding a way to gain monetary or concrete benefits from the art project—such as funding conservation projects to replace native plants that have been removed and provide alternative habitat for displaced animals—would be a logical next step. I remember when I first moved into town twenty-five years ago, that it was not uncommon to see wild coyotes running down the median strip. Now I only see them on the edges of town. Development has pushed them, along with their desert counterparts, farther and farther out. Many people, including new arrivals to Vegas, become upset when these animal residents wander back in.

But we need to ask whose home was here first. Suburban housing developments on the edge of town brag about living on the desert edge, the perfect place to view nature without getting into it. These same developments would call for help from people like me, a former wildlife educator, often requesting a public presentation on how to “live with wildlife.” What they really wanted to know was how they could prevent the coyotes, bobcats, and occasional mountain lions from eating residents’ small pets in their backyards.

Other wildlife experts from Las Vegas respond with tips on how to keep human interests safe while not harming wildlife. People often do not realize that they moved into wild territory, and that it is their responsibility to sanely deal with the conflicts that occur. Adaptive management also means dealing with irresponsible human behavior such as attracting unwanted wildlife or killing animals when they are perceived as a nuisance or threat. The experts talk about the inappropriateness of putting food out for coyotes; how landscaping and water features can draw the prey animals in, along with the predators that follow them; and which deterrents and chemicals are safe and legal.

The upshot is that if you don’t want to see wildlife in your backyard, stay within the city limits.  If you do, take a trip to the many public lands around the Vegas valley that offer nature experiences “in the wild.” Or, if you’d like something in-between, just drive around the freeways in town and get your “nature fix” through striking outdoor artistic renderings. The natural residents don’t care how we make the nature connection, just as long as we become aware of their existence and their plight. For those willing to journey beyond the neon, there are magical places and fantastical creatures that have little to do with glitzy casinos. They and this desert are worthy of our respect. Follow the bighorn sculptures and you may be lucky enough to discover them.