lunacy (noun) lu-na-cy: 1) insanity, 2) intermittent insanity once believed to be related to phases of the moon (Merriam Webster Dictionary)

We had an impromptu moon party on our driveway last month to witness the lunar eclipse and blood moon. A few neighbors joined us in lawn chairs as the celestial performance took place. Our ages ranged from 7 to 50; our questions ranged even more widely, from the very basic “What causes an eclipse?” to more complicated issues: Why is it red? How far away is the moon? How long does it take to get there? Are there any plans to go there in the future?

Then, of course, as always happens when you are contemplating space, the questions got a little more esoteric. Are there other planets like Earth out there? Is anyone else, on another planet, watching this eclipse? Most of us gathered on the driveway felt it was likely there were other intelligent beings out there, but we disagreed on what they would look like. Had we been visited? Would we be soon? Was there somehow a parallel universe to ours where we all had doppelgangers?

Our driveway group agreed that should our planet ever experience a threat from alien visitors, all Earthly disagreements, even wars, would be set aside to protect our home. After all, we are, first and foremost, Earth Creatures.

It was one of the most interesting conversations I’ve ever had with my neighbors. Deep questions. Pondering. Unknown. 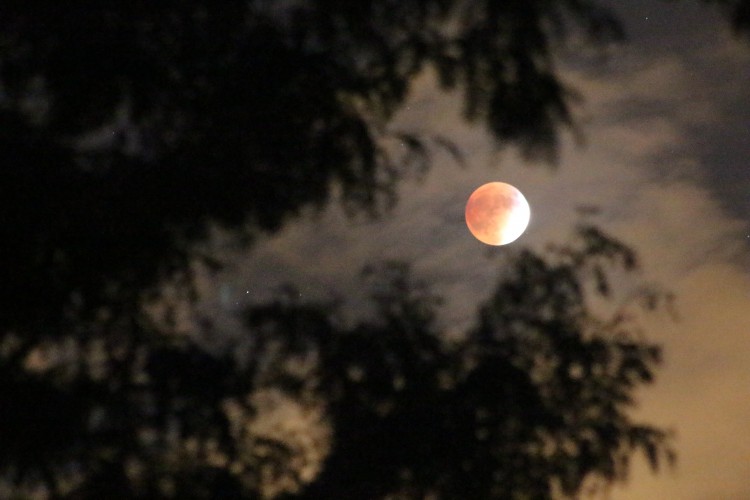 Our relationship with the moon has changed since man set foot on it in 1969. Remember those notions that the moon was made of cheese? Or the stories about the Man in the Moon? It was a thing of mystery, an unknown, something with unlimited possibility. But once we stepped on it, explored it, brought home rock samples, the wonder had boundaries. It wasn’t cheese. There was no Man. It was a giant orb of rock. A human footprint on the moon may have been caused by a giant leap, but it left us with something considerably less poetic.

I’d make a lousy scientist because I prefer the wonder, the questioning. I like not knowing. Frankly, I think we are kinder and we act better when the possibilities are endless. Who knows what is true? Who knows who is watching? Who knows who is calling the shots? Best to maintain our good behavior. I suppose that’s an argument in favor of religion.

Ancient cultures had their own beliefs about the moon and these sorts of celestial events. I like the fanciful tales of werewolves, the Incan tale of a bloodthirsty jaguar that ate the moon, the various Native American stories that explain the constellations. They require a creativity and connection with the natural world that the moon walk, with its facts and figures, may have ruined. The more we know, the less we wonder.

I’m not suggesting we turn our back on inquiry or that we stop trying to scientifically understand our universe. If we are to interact with nature responsibly, we must gather as much information as we can. And who doesn’t marvel at a new exploration, a fresh discovery? We were all fascinated to see what New Horizons could show us about Pluto. We itch to know. But the awe the ancient humans must have felt as they pondered the heavens came in part from not knowing. The mysteries of the gods. I suspect that the loss of awe leads down a slippery path to indifference.

The word “lunacy” comes from the Roman moon goddess Luna, bolstering many people’s beliefs that a full moon makes us go a little crazy. Roman historian Pliny the Elder suggested that since the brain was so moist it was influenced by the moon, much like the tides. While numerous studies have tried and failed to confirm this, many police and hospital personnel swear it to be true. 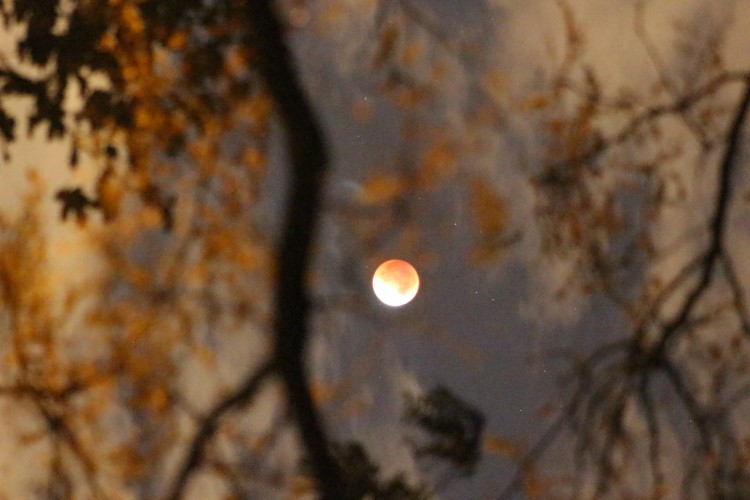 What effect does the moon have on us? Anything? Certainly that night, on the driveway, it made us all think a little deeper, reach a little further. Is it hubris to believe we aren’t affected? Or folly to believe we are?

I wondered whether the coyotes in our woods would celebrate the lunar event with a chorus of their yips and yelps, which we hear periodically, particularly in concert with late-night sirens. But the night was quiet, the only yelps came from the sledding hill nearby, where several dozen people had gathered, presumably trying to get as close to the moon as they could. Even the owls were quiet that night.

It is on nights like these, when the moon looks more 3-dimensional than usual, that we get a little perspective on our own planet. Looking at that red orb, we couldn’t help but try to picture what our blue-and-green version would look like from space. Who would want to go to the moon? (We all did.) How about Mars? (Only one brave soul.) This provoked more discussion and all ages joined in. We don’t usually have such good multi-generational conversations.

I work in a grade school library and the day after the eclipse I put moon and space books on display. When I asked how many students had seen the blood moon, almost half the school raised their hands. Their excitement was palpable; their statements not entirely believable. “I watched all night long.” “I saw five moons at my house.” “I saw fourteen!” Competition frequently trumps fact among kindergartners.

Nevertheless, it was refreshing to have such spirited discussion about a natural phenomenon—that sort of enthusiasm is usually reserved for sporting events or pop singers. It made me wish for more. Surely it is healthy to wonder about life beyond our planetary borders. To look skyward and be amazed. On the driveway that night, it made us all feel more protective of our Earthly home. 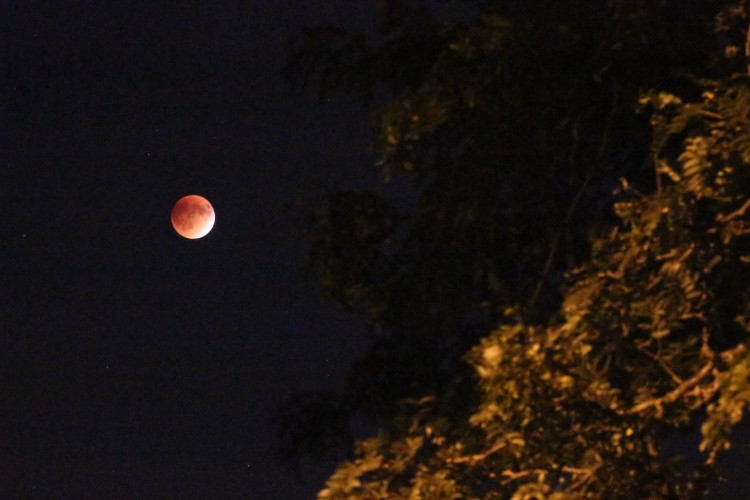 There will be more eclipses, more blood moons. While astronomers have painstakingly mapped out the schedule, beauty is beyond our control. Hopefully, on driveways near and far, we will strive to understand, but, primarily, we will stand in awe as fellow Earth Creatures.

All photos by Chris Howes.