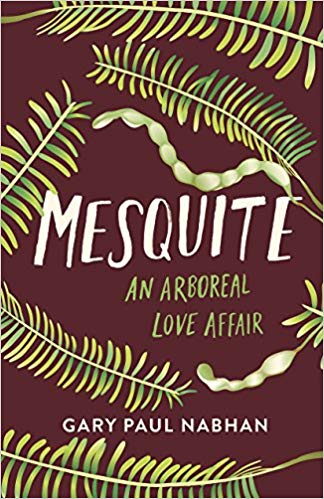 Metamorphosis is not a term typically associated with human animals. As dramatic as such transformations are, the idea that one of us might undergo the process of becoming, say, a tree, stretches the boundaries of the word. Our differences go beyond mere appearances and nutritional preferences, after all. This does not stop ecologist Gary Paul Nabhan from attempting such a feat, after having fallen hopelessly in love with the leguminous, desert-dwelling mesquite tree. His book, Mesquite: An Arboreal Love Affair, documents the journey.

Nabhan’s focus on the mesquite tree may well have been lost on me, who couldn’t spot a mesquite if I walked right into one (it lives in the desert and has pods, right?). Yet the strong undercurrent of “arboreality” got my attention. Nabhan suggests that most of us have never “fully seen, smelled, heard, tasted or been touched by a tree.”

This idea is nearly as absurd as the human-tree metamorphosis, at least at first. What human has not climbed, sat on, sat under, and touched a tree? We all recognize our dependence on oxygen, a waste product of trees and other plants. Many of us have even come to accept that trees communicate with, even defend and support, others in their “communities.” Still, we have hardly shaken the notion of them as hard and unfeeling vehicles for carbon dioxide. They don’t move, see, smell, or hear. This will change, says Nabhan, if we dedicate ourselves to uncovering their hidden attractions. If we do the work, he says, we just might come to see that a tree is in fact “a sentient being of consummate poise, sessile grace, and impeccable instincts. It has the capacity to care for us, to love.”

And by the way, trees are sentient. Just ask a plant neurobiologist. Nabhan gives a nod to one, Stefano Mancuso, who says that plants have senses analogous to all five of ours, plus fifteen others. Mancuso says (to Michael Pollan, in the New Yorker) that plants have millions of brains instead of just one. A plant’s brains are found in its radicles, the parts from which roots grow. Radicles can sense resources and danger; they can compel the roots to grow toward nutrients; they can encourage relationships with helpful microbes; and much more.[1]

Now back to Nabhan’s beloved and highly intelligent mesquite. This tree, he says, is not simply coupled seamlessly with its habitat; it responds to it. The tree and its environment are in a lover’s dance, shaping one another with each step, but the mesquite is not passive; it can decide which stimuli to pay attention to and which to ignore. The mesquite can play dead, produce self-healing resins, or send the ants who feast on its leaves to attack a saw-wielding human.

We see the impact of the mesquite’s decisions when we look underground. Mesquite roots can travel both deep (in one case, an astonishing 175 feet deep) and wide, seeking moisture wherever it might be found. These extraordinary roots attract fungi and bacteria, who tend to the soil by fixing nitrogen and in other ways. What’s more, mesquite roots hold on to moisture and assist in the building of “resource islands” in the desert. In this way, mesquites “bring forth a world.”

This and much more about the mesquite largely escaped the European-descended settlers of the Southwest. As one “cow-girl” told Nabhan, “When I was growing up . . . they poisoned them trees. They dragged them down with chains running between two bull-dozers, driving in tandem across the range. They grubbed those suckers out of the ground until their roots was upright, danglin’ in the dry air.”

Mesquite trees are thorny, and also not grass. That’s two good reasons for a rancher’s dislike of them. Unfortunately for the ranchers, the density of mesquite trees increased in tandem with the growth of the livestock industry in Texas, Arizona, and New Mexico. It turns out that some breeds of livestock were excellent propagators of mesquite seeds. Also, the effect of grazing was the creation of loose, arid soils inhospitable to grasses during times of drought or other environmental stress. Such disturbances created conditions that allowed mesquite to move in.

But there’s more to this story.

The ranchers, as Nabhan’s colleague Steve Archer explains, killed the mesquite in an effort to create the kind of grasslands they had seen in areas of high rainfall, but everything they did just seemed to help the mesquite flourish. The lack of grass caused by the grazers meant fewer hot fires, which had previously kept the mesquite in check. The more mesquite grew, the less grass could grow (grass roots are shallower and can’t compete for water). When the ranchers tried to clip the mesquite down to nothing, the trees just grew back (Archer writes that they have a virtually inexhaustible supply of meristematic tissue that will allow them to propagate from the base.) Burning the trees proved equally useless (only a really hot fire that burns through the root system can kill a mesquite). Eventually, ranchers turned to herbicides, which were more effective killers of mesquites—and likely, of other life as well.

Six or so decades and billions of dollars spent on chemical weaponry has yet to eradicate the mesquite, but the trees are not what they used to be. They are, for the most part, “squat and spindly, unlike the giants of days gone by.” The Great Mesquite Forest—which once covered more than seven square miles along the Santa Cruz River and provided an “unparalleled avian habitat”—is a ghost of its former self.

“How much we understand or misunderstand the lives of these plants matters very much, not just to the plants themselves but also to critters like us,” writes Nabhan.

Had the ranchers saved their money and taken some time to understand mesquites, they might not have behaved so mindlessly. Mesquite, you see, was the main source of carbohydrates and proteins for indigenous people living in what we now call the desert borderlands. It also provided shelter, fuel, furniture, sealants, charcoal, medicine . . . and a rich ecosystem.

Fortunately, as Nabhan demonstrates, perspectives on this pesky shrub are changing, and there’s something of a mesquite revival happening, even among ranchers (at least a few). That revival may well have as many benefits for the ranchers as for the mesquites—at least, it seems that way on Ivan Aguirre’s ranch.

Ivan recalls that under his father’s management of the ranch, “there was not a single tree to block your view of the mountains,” but the land was too crippled to grow grass. Over the course of a decade, and with the guidance of ecologist and rancher Allan Savory, Ivan brought his family ranch back to a place of prosperity. Making friends of mesquite trees was a big part of that process. Under his system of ranching, Ivan says his cattle act as a tool for regenerating the land: their dung attracts microbes and insects which help with soil build-up under the mesquites. In the off season, his cow-hands harvest mesquite pods and grind them into flour, which sells at a premium, as it is known to help fight adult-onset diabetes. The return of mule deer to his land brings in revenue from game hunting. With these and other new sources of revenue aided by the presence of mesquite trees, Ivan has managed to purchase adjacent rundown properties. Clearly, there is a nice economic argument for mesquite in this story, but that’s not what it’s really about.

“Part of our role here on this planet is to generate riqueza,” says Ivan. “How would you best say it in English? Richness? Abundance? Diversity? We are put here to observe the natural world and learn from its structure and vigor.”

You don’t need a degree in ecology for this. Nabhan would argue that you don’t even need to finish high school. What you need is to apprentice yourself to a tree—to fall in love with it and learn to speak its language. In the process, you will notice transformation, of yourself and of the world around you. “What looks to be dead comes back to life, new inhabitants rise out of the ashes.”

You might even find yourself sprouting a few extra limbs or start to feel brains manifesting out of your feet. This metamorphosis thing might start to seem appealing, if not plausible.