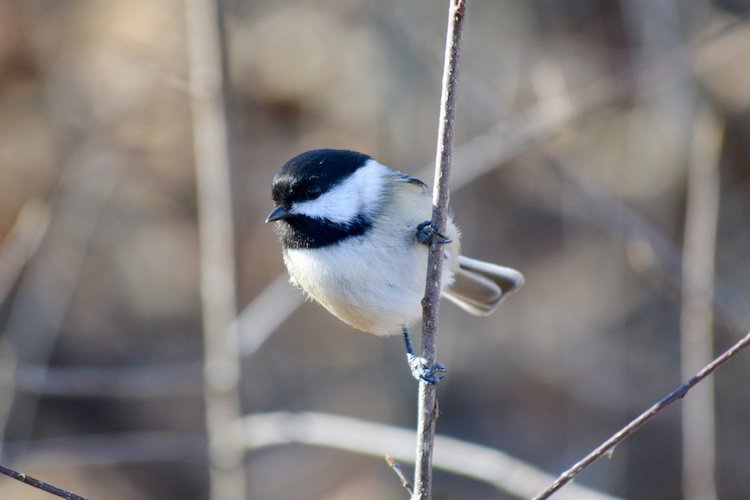 As a black-capped chickadee perched upon my index finger and ate birdseed from the palm of my fingerless wool glove, I thought of the idiom: “You’ll have them eating out of the palm of your hand.” It’s a traditional way of expressing mastery. You’ve won someone, or something, over. 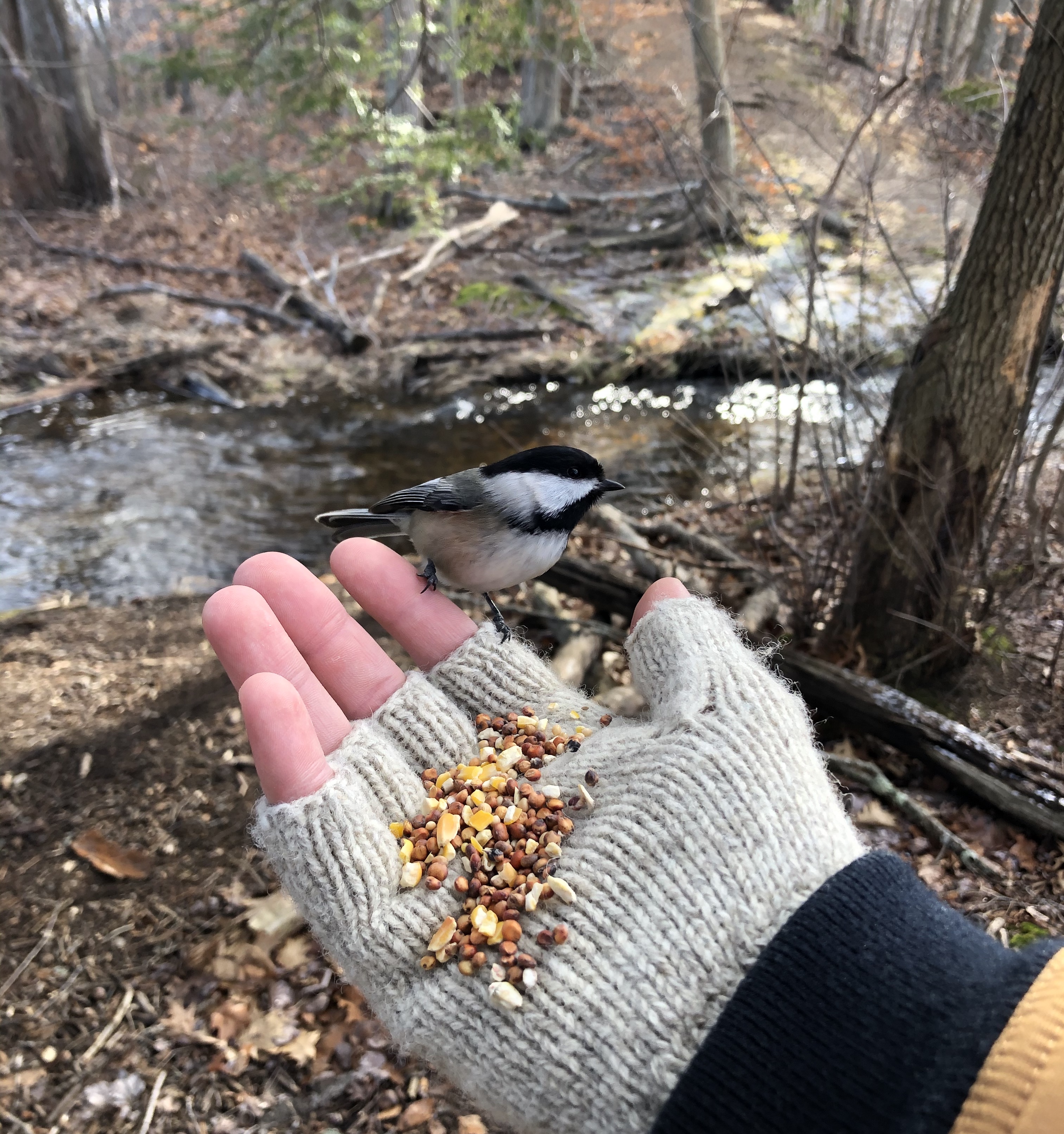 I thought of cowboys holding up sugar cubes to the mouths of newly broken horses—formerly wild, bucking, and stubborn; I thought of captive dolphins waiting eagerly for their trainers to pluck fish from a bucket as a reward for a well-executed trick; I thought of dogs with tails wagging, raising their paws and slapping kisses on their owners’ faces, all in hopes of a table scrap.

It puzzled me that an ostensibly wild bird would fit into the same category. That a chickadee would trust me—a comparatively large stranger—enough to land on my finger as if it were a common twig.

Unbothered, the little bird pecked away at my offering, while a tufted titmouse watched skeptically from behind a cross-hatch of winter branches.

For a time, I felt an aversion to the idea of feeding a bird by hand. I’ll be the first to admit it was a curmudgeonly opinion to hold, and I was probably overthinking it.

It’s far from unheard of for birds—particularly the likes of chickadees—to eat from the hand of an amicable woodland stroller. There are how-to articles offering advice on how to get them to do it. As put by Jennifer Ackerman in The Genius of Birds, “Chickadees are generally unfazed by people… they possess a ‘deep-rooted self-confidence,’ and will investigate everything inside their home territory, Homo sapiens included. Often, they’re the first to visit bird feeders and will even—as I learned—take food straight from the hand.”

Regardless, my instincts veer towards staying “hands off.” Wildlife is special because it is wild, and wild things are not meant to be hand-fed. I recently had a conversation with a college student about captive animals—specifically about how, at aquariums, captive octopuses are fed in a way to create stimulation and challenges, so they don’t grow accustomed to effortless meals. This practice is called “enrichment.” It’s not limited to octopuses; it’s common for all varieties of captive wildlife. Would I, by hand-feeding a wild chickadee, dilute the richness of that bird’s life?

Additionally, I have this underlying feeling that animals—from songbirds to cephalopods—should be wary of me. When I recently saw three coyotes passing through a clearing in the woods, they bounded back into cover before I could take a half-decent picture. The fact that they don’t trot out of the woods to frolic with me, that they don’t come running if I whistle for them, is exactly what excites me. I cherish the blurry picture I got. When I look at it, I can trace a concealed coyote’s silhouette, starting from the little black blip of its nose, showing through the brush.

Chickadees should be wary of me too, I think. They’re small, but they’re not stupid. They have different alarm calls for different threats—the number of dees you hear in their chicka-dee-dee-dee call is related to the threat level they’re trying to convey. So shouldn’t their reaction to me, a human being, be at least a handful of extra dees? But Ackerman did say they’re “unfazed by people.” Maybe this is more about my fragile human ego. I struggle with the idea that chickadees see me walking down the trail and think, “This big bipedal thing seems harmless and might give me food.” I at least deserve a chicka-dee-dee-dee with an equal dee-count given for a tabby cat. 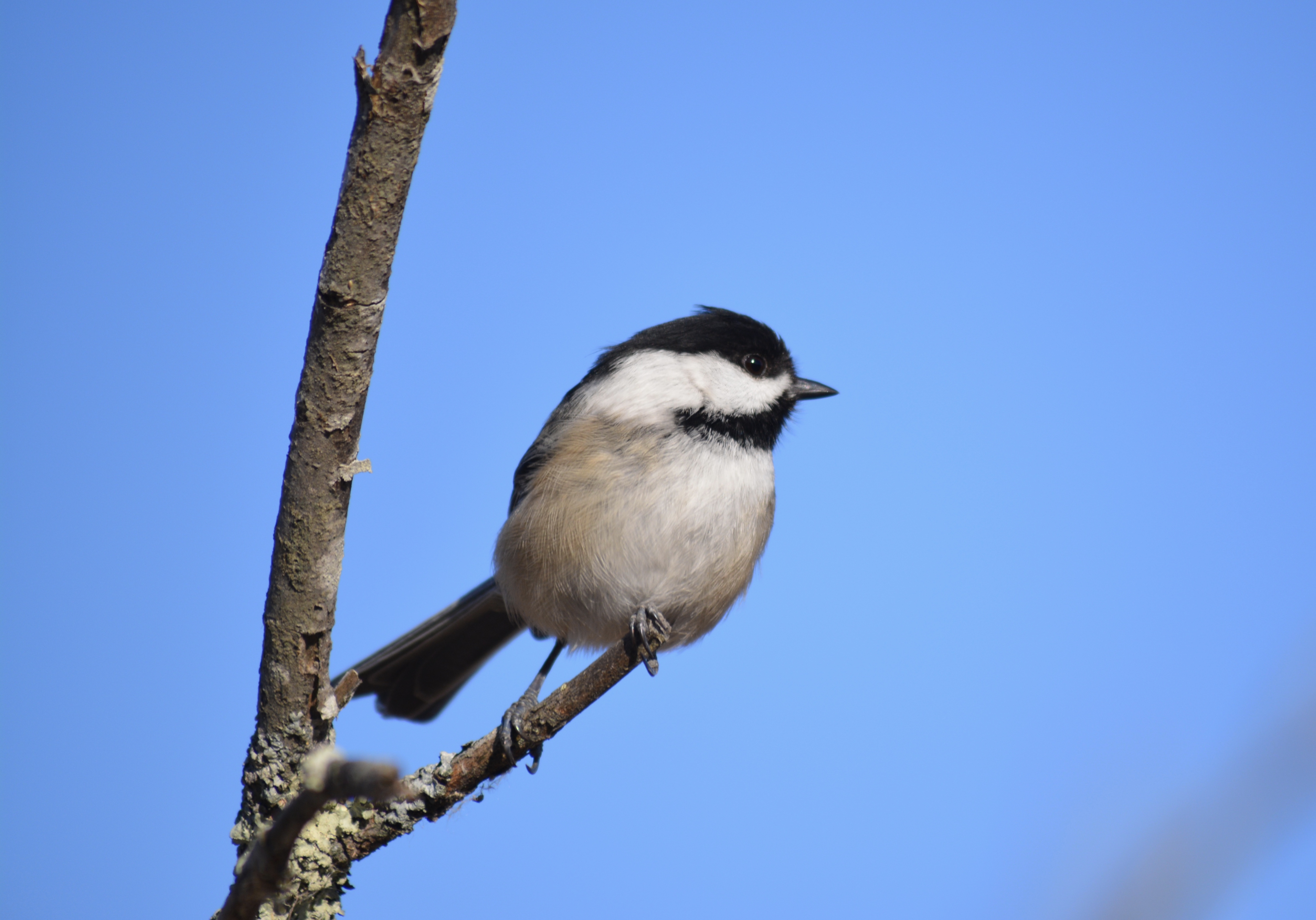 More pragmatically speaking, we are generally warned to keep our distance from wildlife. The National Parks come to mind. Videos go viral when people disobey the sage advice of “keep your distance” and get head-butted by a bison. But immediately, this comparison scans as a false equivalence. Chickadees are not charismatic megafauna. They weigh roughly as much as a AAA battery. They do not have the potential to inflict extensive trauma to my skeleton. So, do the same rules apply?

As I set out for a midwinter’s walk at a nearby wildlife sanctuary—with a reputation for its sociable and hungry chickadees—I thought to myself: Rules are rules. I am not Snow White. Bison or bushtit, the law of the land is: look, don’t touch.

It wasn’t long, though, until I thought: Rules are meant to be broken. It wasn’t long before I felt, if only in my desire for a bird to alight upon my shoulder, like Snow White.

I crossed a small wooden footbridge over a clear cold brook and came upon two other walkers, standing still as sculptures—each with one arm outstretched, palm upward and open.

“Want some birdseed?” one asked.

It would be rude not to accept some. He held his bag of birdseed open and I scooped some into my hand. I took account of the bounty: some sunflower seeds, little kernels of corn. I matched their pose—one arm outstretched, palm upward and open—and we three stood there like boot-clad biblical magi, offering our gifts.

Almost immediately, there was a muffled fluttering and a small flash of movement—then a chickadee on my finger. Ha! I thought—the chickadee likes me best! How quickly I forgot my original stance against feeding the birds. I looked with self-satisfaction at the bird-less hands of my colleagues, who had been so kind to offer me birdseed. The chickadee flitted away, then circled back to my palm. Again, a surge of triumph—of the three hands, the bird selected mine! 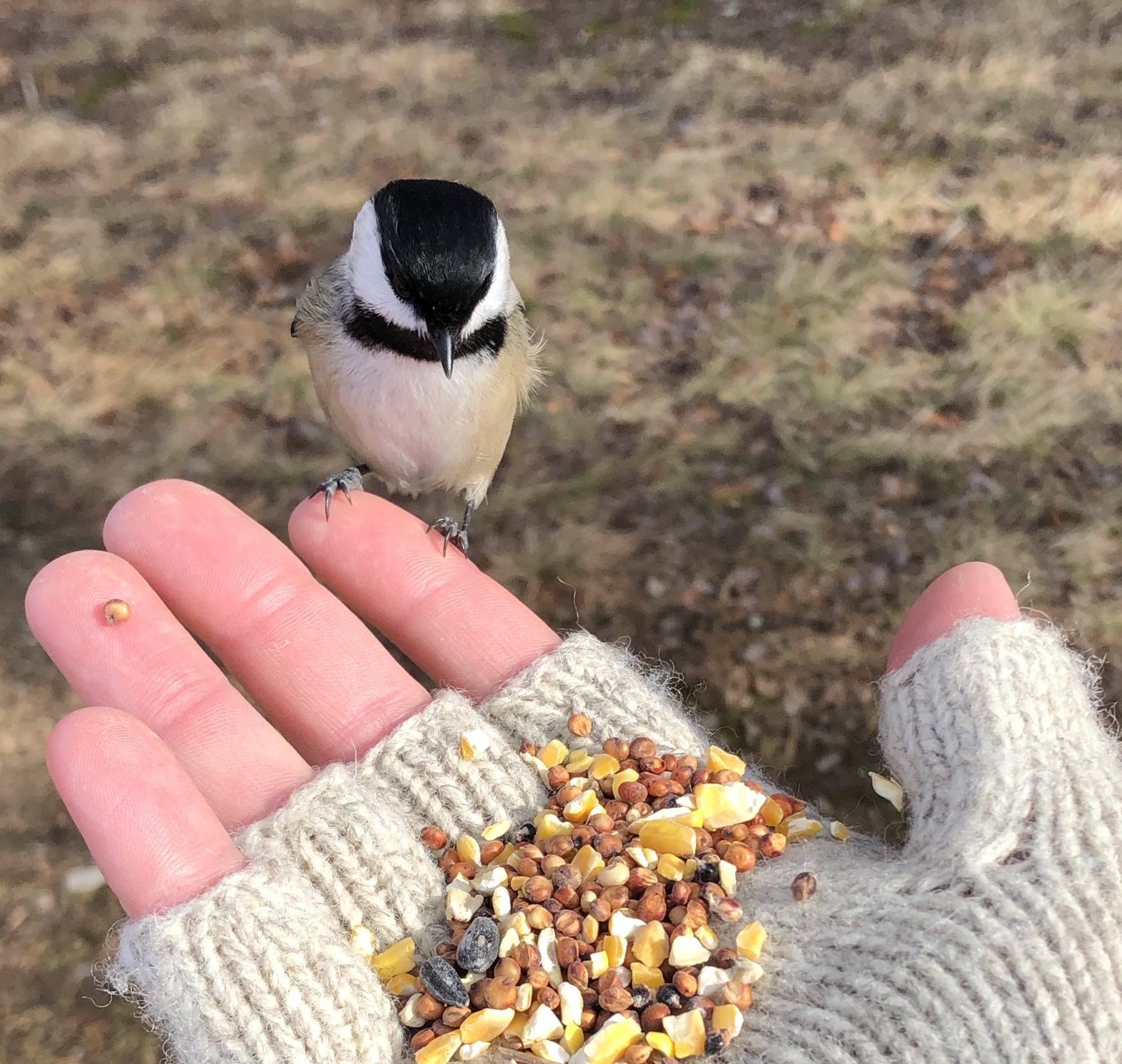 Somewhat ashamed of my pride, and seeking a more private moment with the birds, I said thank you to my compatriots and walked around a corner of the trail to another small wooden footbridge, where I courted more chickadees.

I’m sure I was smiling like a fool. I was still a little conflicted—guiltily, but giddily, overjoyed.

It is rare to feel connected, in that way, to a wild animal. To literally hold one. It’s one thing to watch a chickadee flit about the feeder. It’s another to feel the tensile strength of the bird’s feet, the claws—gentle but firm like little spring-loaded hair clips—as this creature pecks at your hand. What’s the harm, then? If having somebody extend a hand of birdseed to share a moment with a chickadee helps instill a deeper sense of connection and duty—to birds, to animals, the environment at large—that’s got to be a good thing.

When I was out of birdseed, I conducted an experiment: I stood there, empty-handed, with my arm out-stretched in the same fashion as before. Sure enough, chickadees descended to investigate, cocking their heads in what I can only interpret as frustrated vexation as to why there were no seeds in my hand. Were they too accustomed? I considered it again: Had their lives, because of friendly, well-intentioned hand-feeders, been unenriched?

I’ve decided to take a consequentialist view: The good outweighs the bad. Yes, it is true that during every subsequent walk I’ve taken at this wildlife sanctuary, I’ve outstretched an empty hand and been greeted by hungry little birds. I feel pleasantly impish, standing there, a guilty sense of mastery flickering within my chest as I trick bird after bird. It’s too easy. I don’t like doing it. But I continue to do it, because I like feeling the tiny little feet of birds clutching the tip of my finger, like an odd handshake. A little flock of chickadees lingering expectantly around the trail is a small price to pay if it means more people will end up caring about those chickadees, thinking about them, sharing moments with them, feeling invested in their well-being—and that of other birds, other animals, and nature as a whole. There’s a reason I’m writing all of this about the chickadees I’ve fed from my hand, and not about the coyotes I just barely saw in the woods.

And so I circle back to the question of mastery: Have we mastered the chickadees? I don’t think so. As I, ex-curmudgeon, repeatedly find myself sauntering back along the same trail, holding out my hand, hoping to smile down at a plucky little chickadee on my finger, the true situation is clear: the chickadees, with their “deep-rooted self confidence,” have mastered me. They’ve won me over. 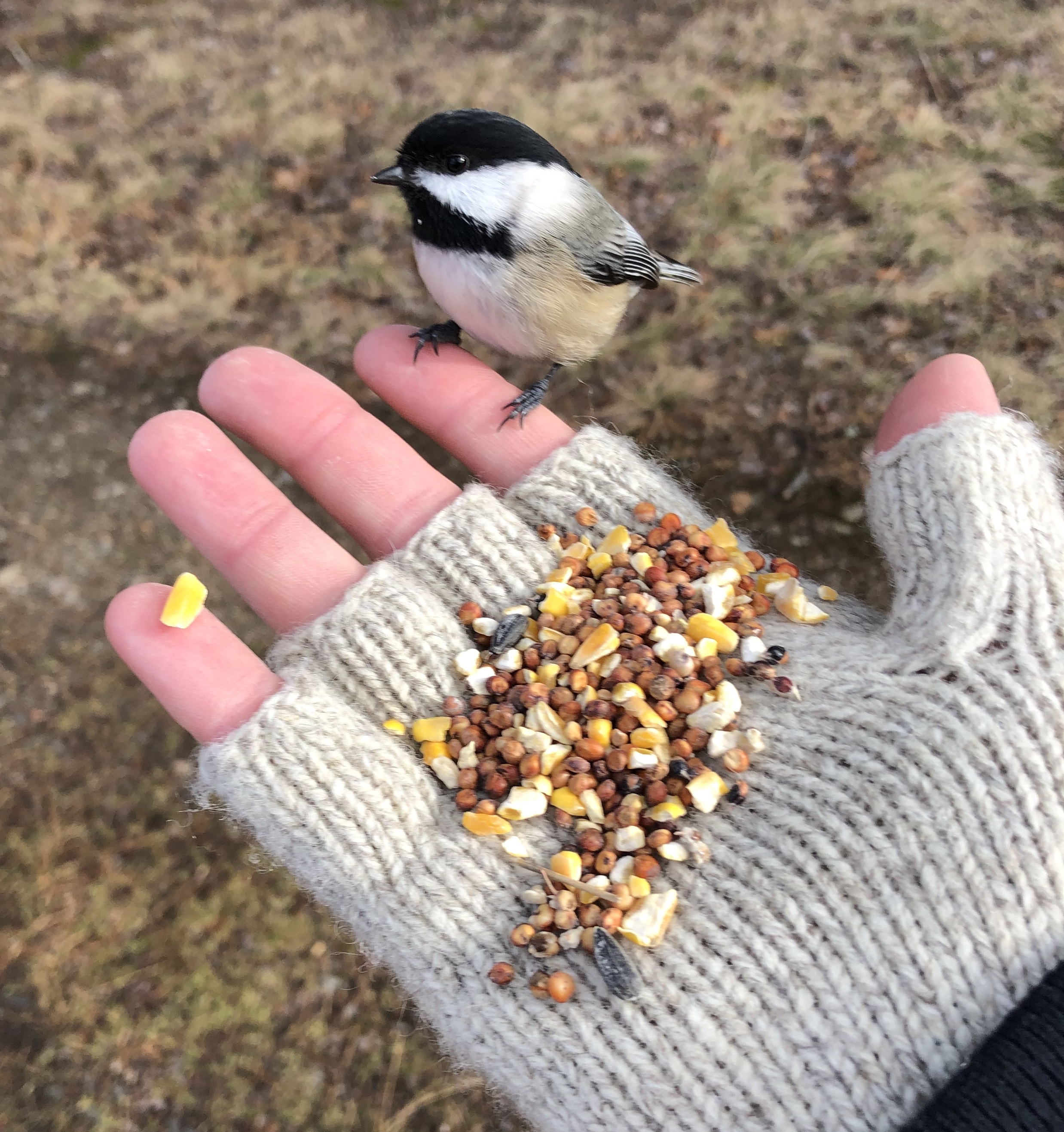