Here: “The City’s in the Garden”

“Wherever you are is called Here.”

Lately, I’ve started writing HERE poems, noting the coordinates of the subject in the title. This is new to me and it offers a shift: planting me in my own location while opening me to the planetary presence of the things I write about. The prose poem “The City’s in the Garden” is a recent piece with this notation.

The garden in the poem lives (and dies) in the Edgewater community in the northernmost part of Lincoln Park, Chicago. It’s a magnet for neighborhood walkers and the draw for my regular route to the lakefront. By simply being here, it creates a community well beyond the folks who work it. We pay attention here—old people, young families, squirrels. Here everything changes moment to moment. There’s a lot to be said here—in conversation, in art, in writing.

When I moved to the city, I gave up a suburban garden and still have muscle and sensory memories of tending it. That garden, while it could certainly disappoint, was more predictable than what I see in the city garden. Here, it feels like anything could happen. That’s what makes it irresistible and fascinating. 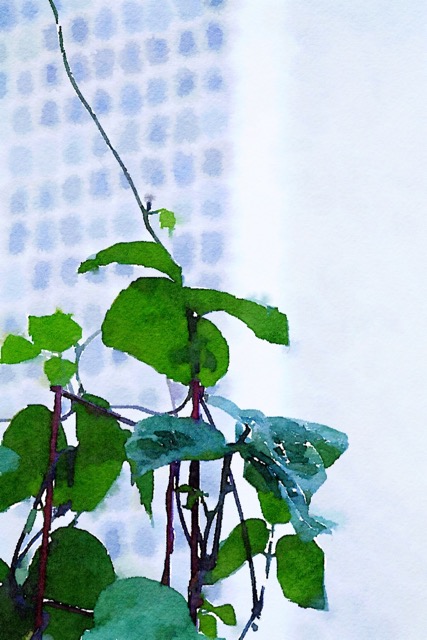 The City’s In The Garden

All winter the long shadows of high-rises stripe

the raised boxes of the community garden.

Early May and an old man bundled against the wind,

slow-walks the maze of beds, each squared with its own bin of soil.

as if the white boxes mark the graves of the dead.

Soon the gardeners will start again with early lettuces.

Already someone has ringed her plot with marigolds.

Someone has turned the soil.

to keep the rabbits at bay.

Warning signs and gnomes appear as if the homeless and addled

and downright mean will heed them at harvest time.

Here in the garden of the specter of dashed hopes,

the Big Boy, Early Girl in plot 11, loved to near ripeness,

may not be there on picking day.

The honey dew, heavy and sweet as a baby’s head,

What’s fulsome and juicy is not promised here, but nurtured still.

You do what you can, you hope for the best.

Absent the worry of overcrowding and weeds and blight

and wind and drought and flood,

absent concerns for critters and human theft, too much sun, too little,

this space would be a magic kingdom.

When its minders return to their homes,

nature and city take over: they have their own kind of plots.

A woman will plant corn this year.

Someone will surely enjoy an ear or two.

It may be her.

In the high-rise retirement home,

seniors look down on the garden through every season.

In good weather they pace the labyrinth,

peer into each greening crib

at all that twines, fuzzes, reaches, swells and smells.

Soon they will see

the stooped bodies of urban farmers at harvest,

sharing bounty and tales of the garden that never sleeps. 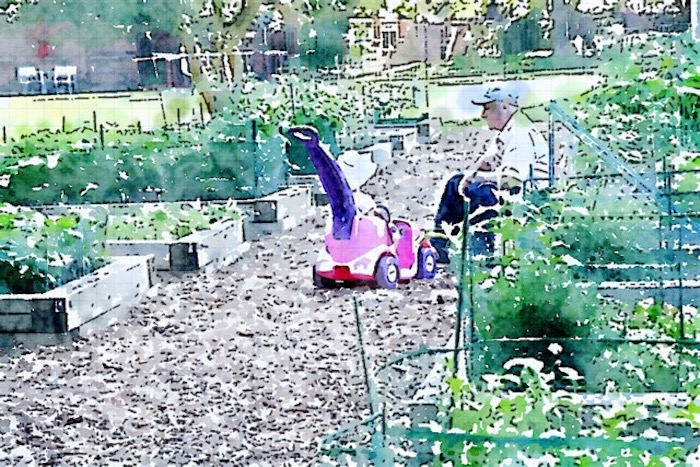 *All photographs, altered with Waterlogue, are by Angela Just.