One million plant and animal species are now facing possible extinction due to a range of anthropogenic factors, from climate change to humanity’s unsustainable use of natural resources. This is one of the main conclusions drawn in a recent report from the Intergovernmental Science-Policy Platform on Biodiversity and Ecosystem Services (IPBES) and presented in May 2019 at the United Nations. The report stresses that we are at a critical moment for the planet’s biodiversity: while it is not too late to prevent many of these extinctions, doing so will require immediate and dramatic changes from the local to the global level. Losing these species would not only deplete the richness of life on Earth but would also detract from progress in reaching international development goals, as human well-being is inherently connected to the life of non-humans and the health of the environment.

Mainstream and scientific media outlets disseminated the news of the IPBES report with an urgency that is becoming more commonplace in discussions of climate change and the state of the planet. Christopher J. Preston’s The Synthetic Age: Outdesigning Evolution, Resurrecting Species, and Reengineering Our World resonates with this sense of urgency in that it, too, locates humanity at a novel and crucial moment in history. In order to avoid mass extinctions and fundamental changes, humans must make careful and difficult decisions. 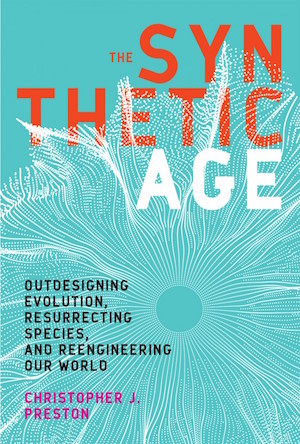 The book’s title derives from Preston’s discussion of what to call this new geological era of large-scale human impact on the environment. Many writers and scholars have considered whether the widely known and used term “Anthropocene” truly captures the reality of this new age and have offered up alternatives such as “Capitalocene” or “Manthropocene.” Preston ultimately decides on “Plastocene,” not because of our current dependence on plastics, but because of the unprecedented ways in which the Earth has become plastic—pliable, capable of being shaped by our technologies and intentions. Unlike some of these other writers, Preston sees the naming of the era as the beginning of a conversation rather than its end result. The remainder of the book is intended to educate average readers about the future of the Plastocene by explaining the technologies that are already shaping our planet. Preston thus aims to empower these readers to conscientiously choose a path forward.

As Preston writes, “More important than what we choose to name this new period of geological history, however, is how we choose to shape it” (xvi). The book’s mission captures the Janus-faced quality of this new age: we are in this predicament because of our effects on the environment, yet we also have the power to fix some of these problems. Each chapter focuses on one field of research or technological advance, from the smallest scale—nanotechnology and molecular manufacturing—to the largest—ecosystem management and atmospheric regulation. In each chapter, Preston explains how the science in question works and explores the advantages and possible disadvantages of the technology. Rather than dictate what his readers should think, Preston attempts to construct a neutral picture of each advancement, giving both the promise and the dangers equal weight. The Synthetic Age, then, is a tool meant to help bring about the democratic engagement that Preston considers essential to making these important ethical decisions.

Throughout these chapters, a few themes emerge, demonstrating that the same moral and logistical questions form the foundation of many of our current problems. One of these themes is that humans have a greater capacity than ever to alter the planet and its life, a development that makes our species more godlike than it has ever been. This power is particularly evident in moments when humans enact novel forms of creation; genomic researcher J. Craig Venter and his team, for example, created a totally new form of bacterial life in their lab in 2010. However, with that unprecedented ability to shape the Earth comes a previously unknown level of risk and uncertainty. Preston vividly conveys how this risk resides in countless endeavors, from nanobots self-replicating out of control to our efforts to counteract global warming sending the planet into a deep freeze. The book’s chapters are also linked by the complexity of their subjects. In example after example, Preston reveals how a technology or area of research transcends disciplinarity, requiring input from biologists, chemists, physicists, city planners, ecologists, and philosophers. All of these perspectives are necessary if we are to avoid “let[ting] ourselves be dragged by commercial interests thoughtlessly into a full-throttle Plastocene” (xx). Instead, we should be choosing which elements of non-human nature to alter and know the reason why.

The underlying theme perhaps most significant to Preston’s book is parsing where the supposed line falls between “nature” and “culture.” Many of the ethical debates discussed in the book are founded on the question of whether it is necessary to preserve something called the “natural,” something that is distinct from humans and their creation—a question that presupposes that there is anything separating humanity from a capital-N “Nature.” Preston briefly touches on this problem in his chapter on nanotechnology: “The territory is complex, and there is an interesting conundrum buried in the debate over how to regulate nanomaterials that dogs many of the technologies of the Plastocene. It concerns whether the distinction between the natural and the artificial can still be a reliable guide at the dawning of the Synthetic Age. Traditionally, there has been a tendency to associate the natural with the normal, the ecological, and the safe. The synthetic or the artificial, on the other hand, has been associated with the humanized, the unnatural, and (often) the potentially suspicious” (16). In not answering his own question, Preston may be attempting to maintain the ideologically neutral stance that is part of the text’s project.

Yet that neutrality comes into question in other moments in the text, such as when Preston dismisses fears that nanotechnology may “replace” nature: “Short of a rapidly spreading grey goo, there will always be a healthy supply of natural, biological nature to be found. The world will retain a complement of ferns and waterfalls, beetles and sparrows, mountain lions and octopuses, all of which will continue to make the place more interesting and lively for us, whatever devices nanotechnologists dream up” (33).

Unlike Preston, I feel less confident in the continued existence of such a “complement” of species, especially given the U.N. biodiversity report discussed earlier. Take the United States mountain lion population, for example. While they are currently classified as “Least Concern,” the Florida panther sub-species is considered endangered, and mountain lion populations throughout the rest of the country are decreasing due to the loss and fragmentation of their habitats. More importantly, Preston’s stance on “the distinction between the natural and the artificial” permeates the rest of the book. Framing non-human nature such as beetles and sparrows as doing something “for us” demonstrates that remaining agnostic on defining “nature” is impossible: even when we think we are being impartial, our fundamental assumptions about the natural world shape our speech and our actions.

Overall, though, The Synthetic Age succeeds quite brilliantly in its goals. In providing clear, engaging explanations, often with an effective use of humor, Preston offers non-specialist readers a useful understanding of technological advances that are often hidden behind paywalls or impenetrable thickets of jargon. Preston has made thoughtful choices in terms of his audience: his intended readers may appreciate the fluid readability and concise length of the text, while scientists may disagree with the simplifications or chafe at the lack of footnotes or other forms of citation through much of the book. Similarly, scholars in the environmental humanities may feel the disconnect between the text’s supposed neutrality and its unexamined biases. Ultimately, Preston’s position as a non-scientist is a strength and demonstrates the interdisciplinarity and democracy essential to consciously choosing a new age that reflects the best that our species has to offer.