Stories from the Slow Flood 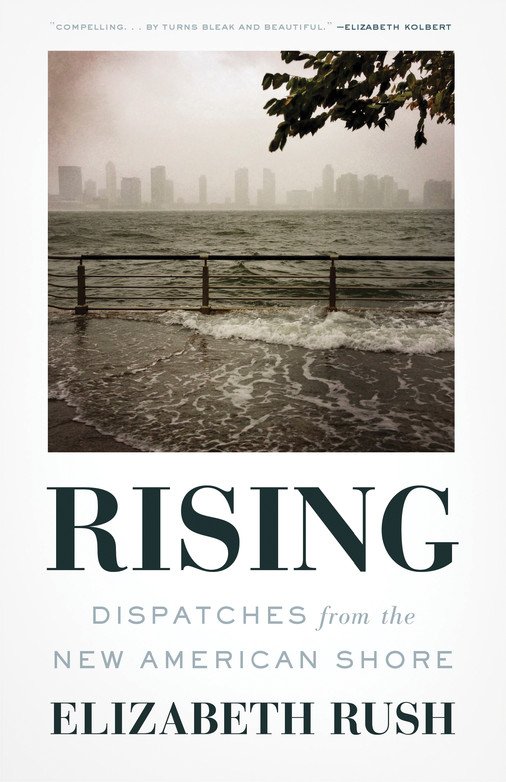 The most important thing to know about Elizabeth Rush’s wrenchingly beautiful new book is that it’s just as much about people as it is about the landscape. Rising: Dispatches from the New American Shore draws together stories from people who live in low-lying communities along the Atlantic, the Pacific, and the Gulf of Mexico coasts. Each chapter is dedicated to a certain community and opens with a first-person account of the effects of sea level rise from the viewpoint of that place (including one from the Center’s contributor Laura Sewall).[1] Despite how far apart these communities may appear on a map, Rush draws attention to the vulnerabilities they have in common. While the effects of climate change can sometimes feel disparate or diffuse, Rising brings far-flung stories into close proximity. She stitches together a wide range of places, people, and experiences, all with one thing in common: they are already drowning. Woven throughout are meditations on what it means to be vulnerable together: together with people who live far away, or with people who live close by, or with people who are rich or poor or black or white or indigenous—and also together with birds, plants, insects, fish, and crustaceans.

Rush opens Rising with a lyrical consideration of language, telling the tale of the tupelo tree. The tupelo, whose name in the Creek language means “swamp tree,” is one of many species of hardwoods that are dying at the edges of the marsh, framing the oncoming sea with their starkly bare branches. Rush describes the importance of language and story in the face of climate change, telling us that she has only learned to recognize tupelos in the context of their imminent loss.[2] Describing what many call the sixth great extinction, Rush writes:

But there is one thing that distinguishes those past die-offs from the one we are currently constructing: never before have humans been there to tell the tale. The language we use to narrate our experience in the world can awaken in us the knowledge that transformation is both necessary and ongoing. When we say the word tupelo, we begin to see that both the trees themselves and the very particular ecology they once depended upon are, at least where they are rooted, gone. (p. 7)

Throughout the book, Rush intersperses descriptions of her own strange and mournful dreams with her subjects’ struggles to come to terms with the destruction of their homes and communities. One of the residents of Staten Island whom Rush interviewed for Rising lost her father during Hurricane Sandy. Another, from Pensacola, lost his home during Hurricane Ivan. Rush’s own sadness echoes through the pages of Rising; researching this book has haunted her with what some term solastalgia: mourning for the loss of a stable environment.

And yet, Rising is a celebration of interdependence as much as it is an elegy for a disappearing landscape. Even as she mourns their loss, Rush explains how complex ecosystems of roots, silt, and fresh and salt water support communities of fish, birds, and people. She treats with equal weight knowledge gleaned from scientists and longtime coastal residents, knitting together an understanding of the entire shoreline as a beautifully—if tragically—connected place. This book is full of stories that will help us remember ecosystems we have learned to value only in the moment of their disappearance.

I am writing this essay in November 2018, as I take the train from San Jose to Los Angeles. The sky is heavy with smoke that clings to my throat and casts a hazy yellow tint across the orchards of central California. This year, the wildfires are exceptionally widespread. I think about the climate disasters that have followed me through my life: When I was nineteen, Hurricane Katrina washed away my childhood home. When I was twenty-five and living in New York, Sandy slammed into the city. And now, here I am, a visitor in California, breathing in the residue of one of the worst fires in decades, alongside the millions of residents affected by the smoke it left behind.

Looking outside the train, I see a group of farmworkers moving through rows of plants, partially obscured by the smoke in the air. Surrounded by windows that protect me from the haze, I think of a line from Rising. The sentence is about sea level rise, but it could just as easily refer to California’s fires: “I am thinking about justice, and what it might look like if we thought of sea level rise as an opportunity to mend our relationship with the land and with each other” (p. 245).

Climate change intensifies the inequalities that already make life less livable for the majority of people in the world. Some of us may be horrified at the realization that the world is ending, but there are many for whom it has been ending for a long time already. To bring this point home, Rush contextualizes the stories in Rising with the history of human settlement along the American shore. After all, the lived effects of sea level rise are made infinitely worse when developers build on inexpensive, flood-prone land and sell those homes to unsuspecting buyers. And Rush reaches back even further than that, reminding us that the swamps historically considered worthless—or even dangerous—by Europeans were sanctuaries for indigenous communities, former slaves, and other persecuted peoples. When the Swamp Land Act allowed states to “reclaim” wetlands for settlement and agriculture,these people were displaced. When inexpensive, low-lying areas near large ports became hubs of industry, the areas around factories were developed to house workers who were paid too little to afford to live elsewhere. Now these wetlands are often the site of low-income neighborhoods where local governments refuse to invest in infrastructural defenses against rising seas.

These are the places Rush visits. The stories in Rising are often told from the fringes of cities: She stops into a neighborhood on the outskirts of Pensacola, Florida. She drives to the parts of Miami that lie outside the city’s modern flood-control infrastructure. In New York City, she treks to the edge of Staten Island. She visits Louisiana’s Isle de Jean Charles, which is far south of New Orleans and well outside of the state’s new flood protection projects. These are places where houses are frequently flooded or swallowed whole by storms, places where an especially high tide can now spill sea water out over the street, regardless of whether it has recently rained. I got the sense that Rush sought out these places at the edges of the edge—communities that are often overlooked or ignored as large cities and financial centers undertake projects to protect their own residents from the rising sea.

Not all the stories in Rising are sad. For instance, although she is skeptical about it, Rush tells us about a huge restoration project in California’s Bay Area, where land has been set aside for wetlands to migrate inland as the sea rises. She also relates the story of a grassroots-driven community buy-out in Staten Island, where residents decided that letting their homes be demolished and replaced with wetlands was better than seeing them flood again.

Throughout Rising, Rush exposes her own vulnerabilities, both to the people she interviews and to the reader. She tells us that she has recently left her fiancé, that she was sexually harassed in the course of writing this book, that she fears her life has been too itinerant to truly connect to the landscape the way her subjects have. These brief sketches of her own life give us a sense of her position, bringing into focus the ways in which she has been shaped by forces beyond her control. Rush’s story hums alongside the chorus of voices that animate the pages of Rising, holding all these diverse experiences together.

Rush is reluctant to claim a right to mourn the shoreline because she has moved from place to place too many times. And yet, while knowing a place well may be one position from which to mourn for our warming home, I think being met by disaster after disaster in one’s travels offers another important perspective. Rush’s own story is the weft that supports this tapestry of interwoven tragedies and helps the reader see how climate change implicates us all.

[2] On the importance of language and story see also the work of Robin Wall Kimmerer, https://www.humansandnature.org/robin-wall-kimmerer.