A Stranger in Our Midst 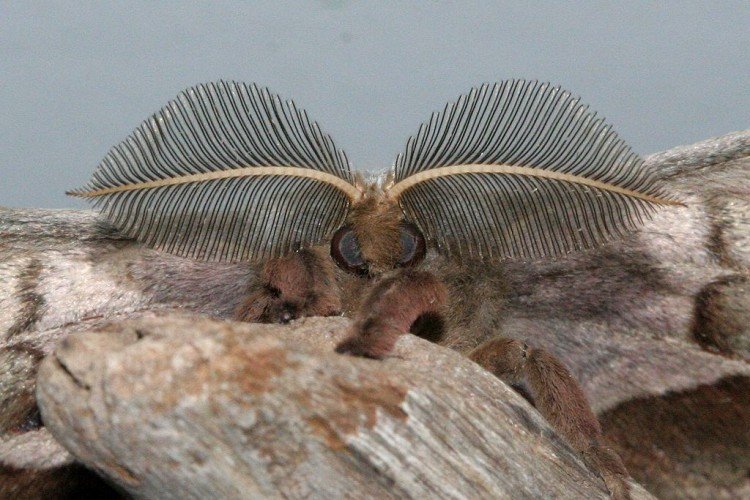 The caterpillar wrinkling along its way looked like your standard issue caterpillar: lots of legs, little hairs, patterned with vaguely geometric design elements. “Its way” happened to be just at the border between the sidewalk and the lawn of a multiunit apartment building down the street from my house.

I had been alerted to it by my then nine-year-old daughter and her friend, just the age at which children find caterpillars most alluring. But no one ever completely outgrows their childhood affection for the creatures, so I went to view the cause of all the excitement. Living up to my parental responsibilities, I brought along a field guide to moths and butterflies, which seemed to indicate this caterpillar would one day become a polyphemus moth.

For some readers, this name and the insect it refers to may be old hat. But for me, the picture was startling, the moth far beyond the everyday in its glory. The image was so striking that I was doubtful anything that showy could possibly have made its way into our quotidian world. “Must be another kind of caterpillar,” I thought.

My daughter’s friend rushed off to get the caterpillar enclosure she had fortuitously just made in day camp, into which went the caterpillar and the same kind of sticks and leaves one always puts in with enclosed caterpillars. The container, whose screen sides didn’t really adhere all that well to the base, then traveled to our house where we put it and its contents on the sideboard in the dining room.

Up to that point in my experience, all captured caterpillars had become lifeless husks at the bottom of whatever container I was keeping them in without ever showing the slightest interest in the stick meant to support the eventual cocoon. But this caterpillar defied ordinary expectations: it shortly enclosed itself in the manner laid down by Nature and remained enclosed as the weeks went on. We looked at it frequently, then occasionally, then not at all.

One day well into the fall I noticed the cocoon had split. I was skeptical that the three stages of caterpillar transformation—larva, pupa, moth—had actually been successful. First of all, a polyphemus moth, with its six-inch wingspan and dramatic design, would be hard to miss in our house, where some members of the family could spot the smallest spider at fifty feet and erupt into shrieking hysterics. Second, our dry indoor heat could have mummified Tutankhamen, which didn’t seem optimal for insect growth. Clearly the cocoon had desiccated and shattered, leaving behind a brittle brown shell with a rotted grub inside.

One evening I don’t know how many days later, I walked downstairs to the first floor and there was a polyphemus moth, resting on the end table by the bookshelf. My reaction was curiously divided—it was beautiful on the one hand, gloriously beautiful, but, on the other, it was a big insect in the house. That evening I let the former feeling predominate. We telephoned the owner of the enclosure; she and her mother came down, and we all oohed and ahhed for a good hour.

After they went home the moth began to assume a more insectoid aspect. What on Earth was I going to do with it? It was autumn edging on winter weather outside, and I was reasonably sure it would freeze to death if I put it out the back door. So I left it about its business, vaguely hoping it would disappear as thoroughly as it had in those first days after the cocoon split. But of course, it didn’t.

I kept running into it over the course of next day or two, never knowing when I might find it fanning its enormous wings: now on the end table, now on the bookshelf. Then there were its excreta, tiny nuggets of iridescent gold that perhaps should have made me think of fairy folk but didn’t. They studded the tops of papers and lay scattered on glass surfaces everywhere I turned in the house.

The days went on, well past the time I would have expected a moth so far out of its element to perish. What was it drinking? Where was it finding food? I couldn’t make out an answer, yet it lived stubbornly, inconveniently on. My daughter, meantime, had lost all concern. Children often fail to consider the connection between their behavior and the suffering of another. They don’t yet grasp that cruelty can result from action or inaction. Often they’re not particularly bothered by others’ victimhood. They read with bright interest fairy tales to make a parent’s skin crawl.

Not so adults. Our relationships come trailing clouds of complexity, and we are in relationship with all living creatures. Now that I had invited it into our midst, the moth made me uneasy. It was not like us, it was not even like a cat or a dog, and I did not know what it would do next. Would the gold nuggets turn out to be eggs that filled my house with caterpillars? The moth’s pulpy wings were not the delicate, inoffensive gossamer of a butterfly’s wings. What future putrefaction might stem from those vaguely menacing appendages? As I pondered what to do with this stranger in our midst, the line between us became clearer and clearer—as clear as the border between countries, as clear as the line between us and them.

Some people know that the answer to an unease of this sort is to be generous, compassionate, and kind. I am not one of them. I could have called any one of a number of institutions that know about insects; I could have consulted the Internet. Perhaps the moth would have died in a couple more days, or perhaps polyphemus moths thrive in cold weather. In any event, I could have taken appropriate action on the basis of information, even if that information had turned out to be about the terrible havoc wrought by captive polyphemus moths.

But I did not. My unease with the moth, of course, was unease with myself, with my lack of capacity for generosity and kindness. Another person’s question might have been, “What could I do better?” but my question was “How can I get rid of the evidence?”—as quickly and conveniently as possible, of course. Notions of putting the moth to death entered my mind, but the thought of the resulting guck was a real sticking point. I kept it on the enclosed back porch for a night, but in the morning it had not drifted off into a peaceful, eternal and sterile sleep. No, perched on the edge of one of the cardboard boxes, it was as live and as monstrous an insect as ever. Little gold nuggets decorated the tops of the objects in the surrounding boxes. It was clear to me that the polyphemus moth did not belong in our midst.

I put it outside. It flapped feebly a few times; then I shut the back door.