The Wild and Not-So-Wild City Creature Neighbors at, by, and in My House 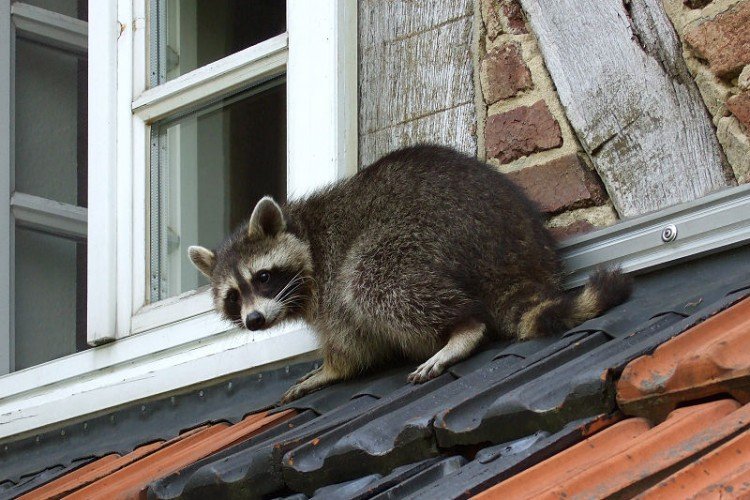 The city creature neighbors in and around the place I dwell are a diverse group of other-than-human people of all shapes, sizes and personalities. Not only are they neighbors, my relationships with these folks informs an essential part of who I am. I moved with my family to Chicago at the age of three, and, as far back as my memory reaches, Chicago has always been a place of multispecies relationships rather than a human-dominated, human-manufactured metropolis.

I now live in the Avondale neighborhood on the Northwest Side of this city with its approximately 2.7 million human inhabitants. A population swell is currently occurring in many neighborhoods as well as downtown. The human population density where I now dwell is quite a bit lower than downtown and other more “happening” areas of the city, such as Lakeview, Ukrainian Village, Bucktown, and even Logan Square. Primarily a residential area, the Avondale neighborhood contains small Mexican and Polish grocery stores along Milwaukee and Pulaski Avenues with a handful of small businesses and restaurants. There are far fewer apartment buildings in our neck of the woods and the ones that are here typically have no more than ten units per building. More common are two-flats, which have front and back yards and plenty of space in between. Compared to the rest of the city, we have a bit more elbowroom when it comes to interacting with all our human neighbors, who I seldom see regularly. 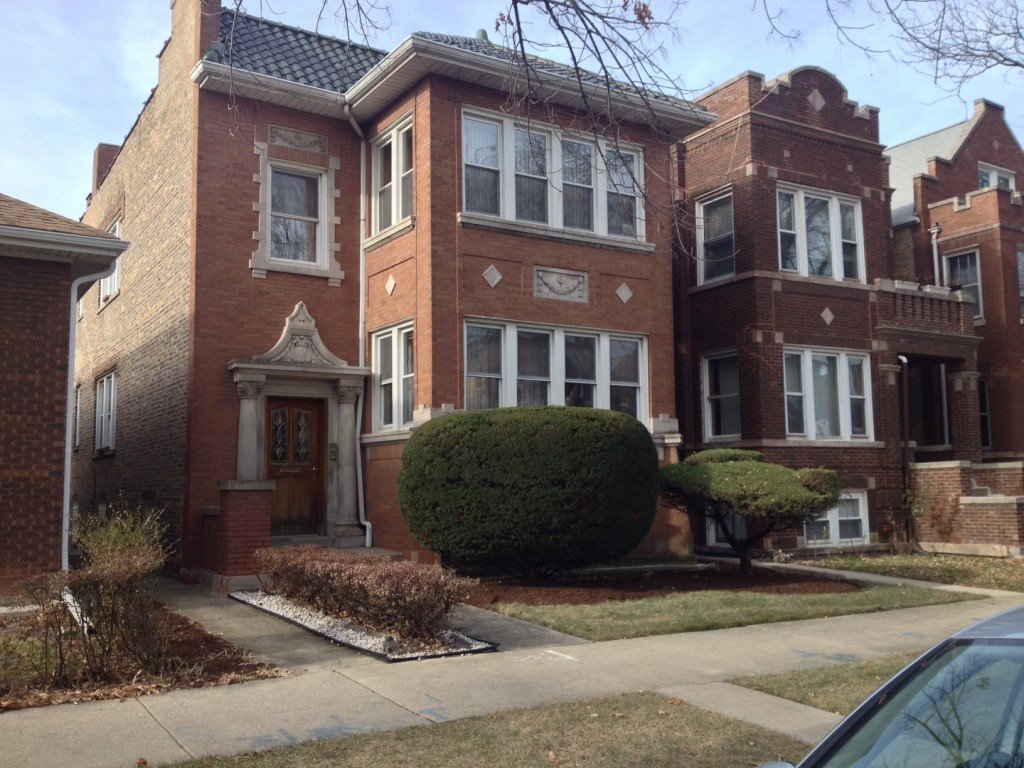 My non-human neighbors, however, I am always bumping into and are everywhere to be found, even within the so-called property line of where I live with my five—no, six—feline family members: Wolfgang, Tweedy-bird, Twitter Mouse, Linnaeus, Sassafras, and our newest family member—who was initially merely a neighbor that stopped by during the winter months to warm up and share a meal (and has no human-given name, as of yet, because I have not identified a name that I feel suits his personality). 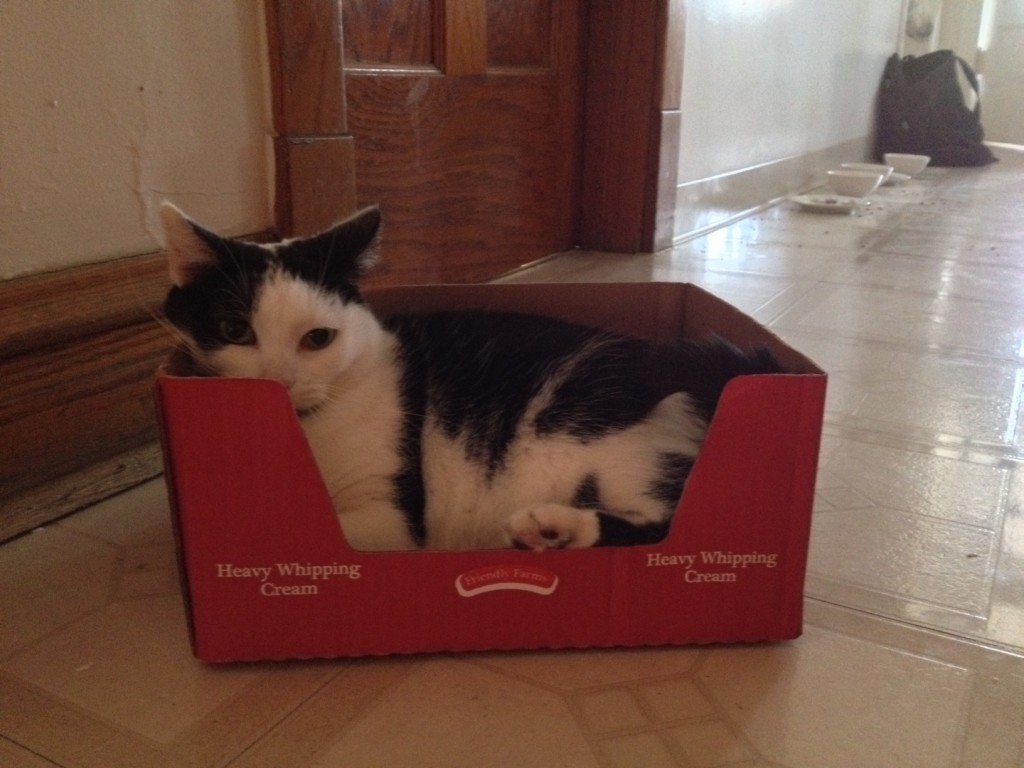 My nonhuman neighbors consist of both the more transient types who stop by regularly, or not, and those that live on the premises. The more transient types include the raccoons, pigeons, doves, sparrows, cicadas, and the gold finches and house finches who love the thistle seed we share with them. In fall there are the occasional passersby, including the greenish dragonflies, always flying southwest in droves of hundreds, starting in the morning and continuing throughout the day. Of course, there are many, many others, but this is a list of those neighbors with whom I have the most contact. My immediate, not-so-transient neighbors include various sizes of black ants, earthworms, ground beetles, and other small invertebrates.

By tuning into these neighbors’ business, I’ve discovered a great deal of daily drama…

August 23, 2013: I had the privilege of seeing the redheaded house finches bring their two youngsters to our bird feeder, which is full of thistle seeds. The redheaded kids sat at the top of the feeder, still figuring out how to navigate the clear plastic tube with all of its thin slats. One youngster, chubbier and more clumsy than his sibling, with little black innocent eyes common to fledglings, was trying especially hard to puzzle things out. Seeing the family all together was a bit of a relief since on previous days I had only seen the older male stop by and thought perhaps he had lost his lovely mate. So there was much reason to celebrate the complete family unit coming over to feast! 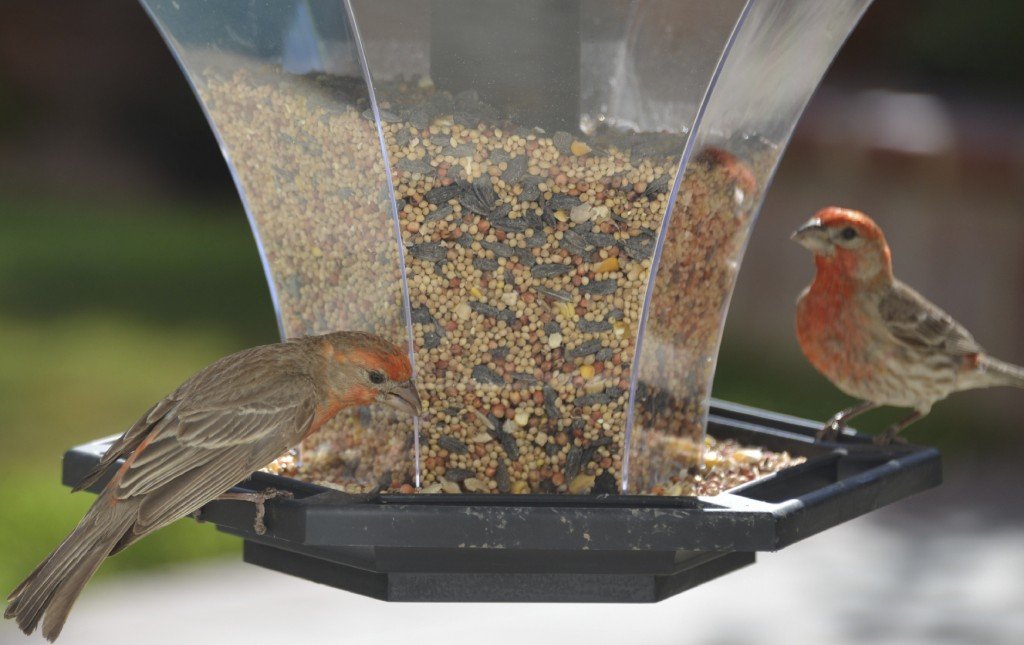 January 4, 2014: I relish watching and interacting with a pair of young raccoon siblings that currently frequent my porch, as they pick up dry cat food and a swig of water. The two make a noisy pair, squabbling over who gets first dibs at the food bowl. One clearly dominates. His partner vies for access to the bowl but the dominant coon responds by forcefully and quite suddenly propelling his body mass towards the other with treacherous squeals. Being the peacemaker, I feel compelled to offer a second bowl and gently push it trough the open screen door. Voila, two satisfied coons at my back porch. The only other tiffs that occur are when the raccoons stop by and Sassafras happens to be out for her evening stroll. Although the other cats tend to be quite neutral though occasionally curious about their coon neighbors, Sassafras is not: she smacks them right across the face—not very neighborly. 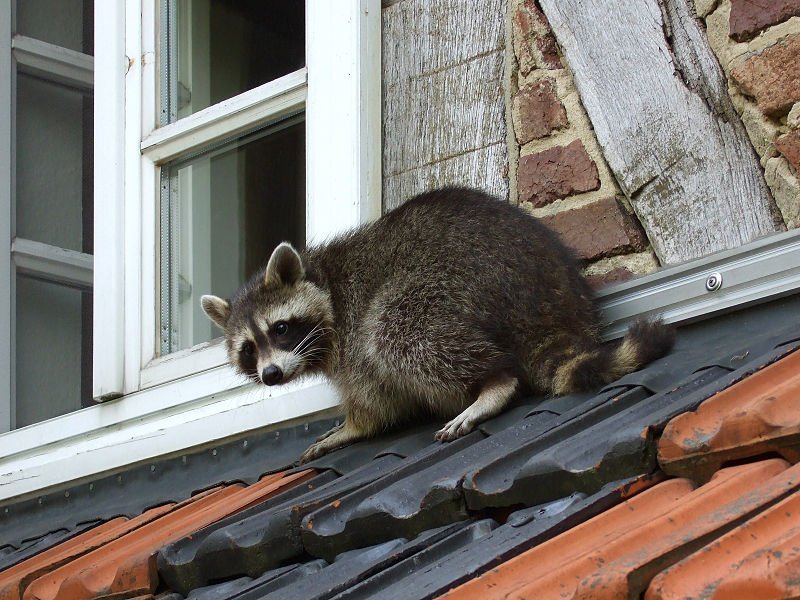 August 3, 2014: Saturday, late afternoon, there was quite the showdown at our address amongst the pebbles that cover the backyard soil. A war appeared to be transpiring between the larger black ants (lbas) and smaller black ants (sbas). The lbas appeared to be attacking the sbas’ home turf. Getting down on my hands and knees and pulling out my reading glasses, I discerned that the lbas would grab hold of the sbas, who would immediately curl up and perish. I deduced this because I could see several curled up sba carcasses on the pebbles surrounding the area. Also, I noticed quite a few sbas distancing themselves from the immediate area where the lbas now ruled. Once I made my deduction, I immediately began relocating the surviving sbas about a foot northeast of the war zone. I chose this spot because I noticed several sbas scurrying around at this alternate location. The relocation method involved transporting the pebbles avec ant. 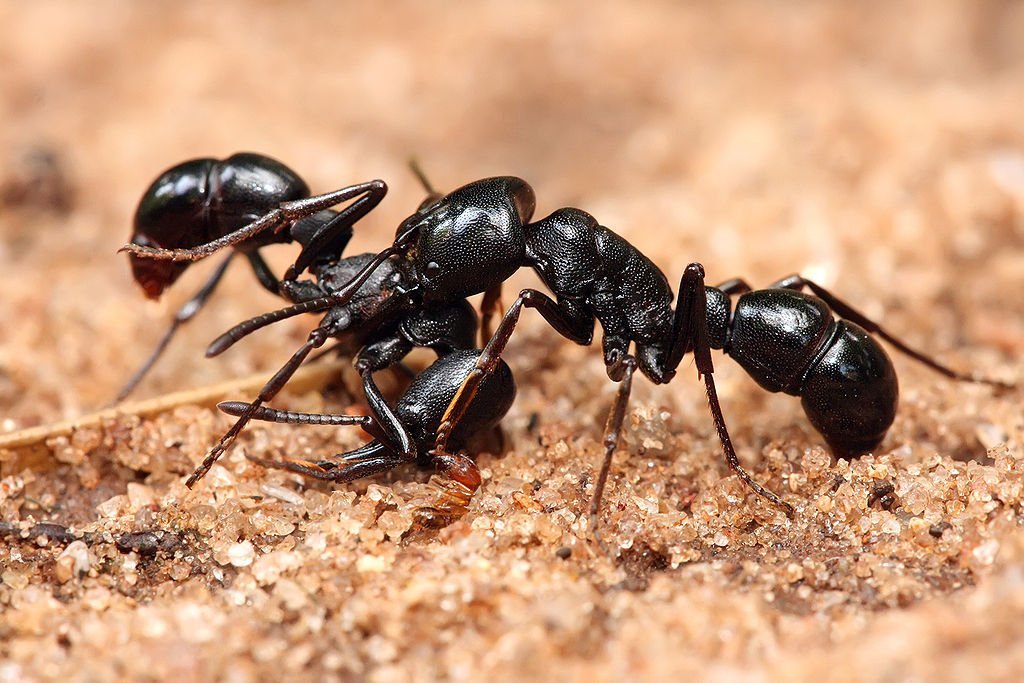 I was so entranced by the goings-on that when my boyfriend—currently living in Scotland—called I had to tell him I was busy saving ants from one another and would have to call him back. I continued to relocate the smaller contingent of sbas with absolutely no real understanding if I was helping anyone in any way. But I had to … the peacemaker thing. I might have unsettled the natural course of things but I do that all the time by existing as a big-footed human other, living on and demanding so much of planet Earth. The next morning all was quiet. It looked as if the smaller ants had moved a couple feet due east to burrow under another pile of pebbles. And at the former residence there was no one to be found. No lbas or sbas at all.

My intervention in the war of the lbas and sbas prompted a childhood memory about the nonhuman neighbors I grew up with in the Lincoln Park area, just north of downtown. I was always looking for life amidst the concrete sidewalks and asphalt alleys. Beautiful flowers sprang up from the cracks. No matter where I went I noticed the “natural” (the other-than-human elements that have never quite been eradicated by urbanization). One of my more vivid memories is once seeing a wasp drop whatever treasure she carried in the middle of the intersection of Webster and Sedgwick Street. She dove, turned, and hovered, trying to re-locate it. I then saw a car coming towards her. I had such an urge to run into the street and somehow save her from the threat of the re-formed products of an African rubber tree plant (i.e., car tires) that were heading her way. Luckily, before I ran into the intersection, the wasp grabbed her item and dashed upward in the knick of time—thank the universe for that stop sign!

September 10, 2014: Currently I’m sitting in the Cook County Law Library (housed in the first public building to be built in Chicago in the modern style of Ludwig Mies van der Rohe), where I stopped in for some free wireless Internet and an awesome view of the city. Here none of my familiar neighbors are to be found but instead a plethora of urban spiders, in all sizes, nestled at the edges of the floor-to-ceiling windows. On the outside of course! Some are large, plump, dynamic; others miniscule and seemingly more vulnerable. Swallows and dragonflies fly by, deftly riding the currents of air up here near the 29th floor. It is astounding to see these delicate creatures amongst the massive steel and concrete structures erupting from the long-gone marshes. There is one large spider in particular that catches my eye. She scampers in all directions, busy thumping at the thread she weaves. The rest are a fairly docile bunch. She seems like one of those human others you see downtown, walking briskly with a large cup of Starbucks, talking on the phone and taking up more than her share of personal space. Could be me, on certain mornings. 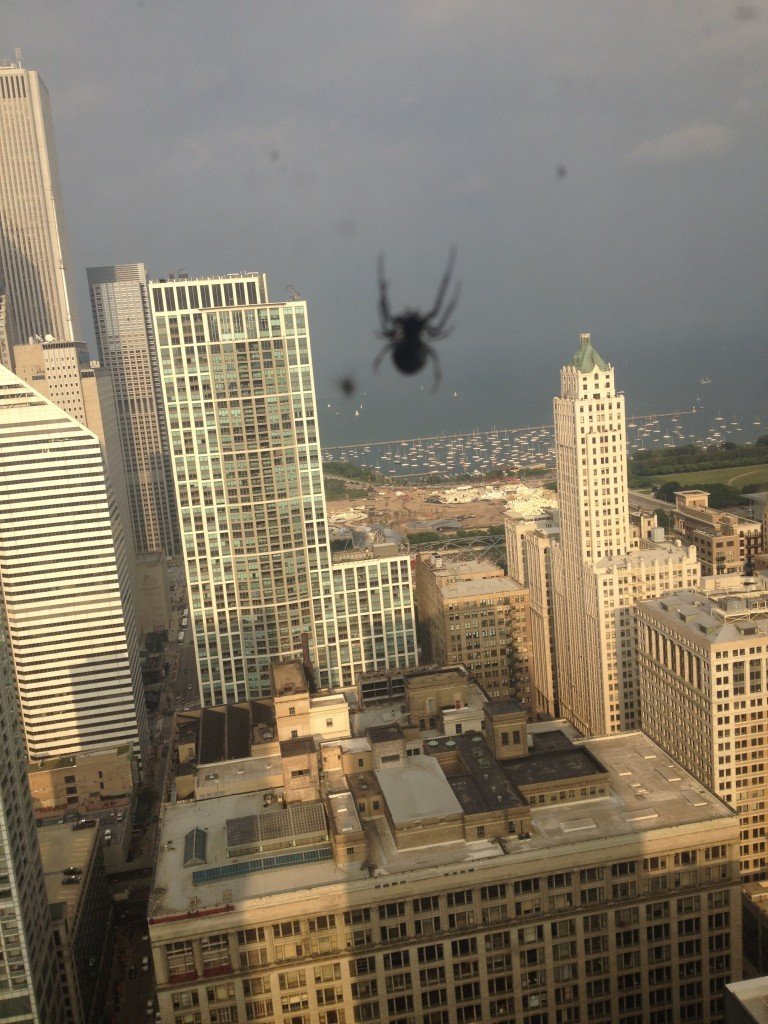 Its 6:45pm, the law library is preparing to close its doors. Time to move on. Time to go home to all my family and urban neighbors, big and small; furry and crunchy; loud and barely audible. We are all finding our way in the city, human and non-human other alike.