New Year’s Day dawned crisp and bright, so I went for a walk in the sparkling snow with no particular purpose in mind. But soon, scarcely a quarter mile up the road, four beehives beckoned. 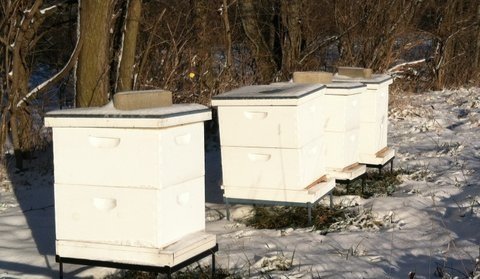 Yesterday’s storm started in ice and ended in snow, and I reckoned it might have blocked the small entrance in the mouse-guard at the base of each hive. (In summer, the entire width of the hive is a take-off and landing platform for the bees, but when mice are looking for comfy spots to hunker down over the winter, we thwart them by blocking most of the landing strip with a narrow piece of wood.) As I came closer, I saw that the first hive’s entrance was iced over, so I carefully unblocked the inch-long opening with my finger nails. Moving on to the next hive, I saw that its entrance was open, as were the others’.

But one hive was unlike the others in that there were a half dozen bees on the snow of the landing board. Like other insects, the honey bee is cold-blooded. But unlike other insects, bee colonies do not die off in the fall or hibernate. While individual honeybees are ectothermic (maintaining body heat from outside sources), a hive collectively is, somewhat miraculously, endothermic (maintaining body heat from within), through the highly choreographed wing-muscle contractions of a tight cluster of thousands of bees. 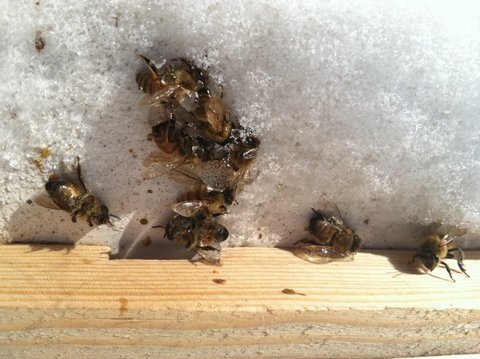 An independent-minded bee in winter is a dead bee, and indeed, the bees near the hive entrance were frozen stiff, their delicately ice-encased legs and wings like those of Baltic  insects caught in pre-historic amber. But these bees had died inside the hive and been hauled out by their sisters doing housecleaning before the snow storm, probably on that freak 50-some degree day we had a month ago.

As I bent down to examine the crystalline bees, I heard the unmistakable buzz of life from within the hive, and pressed my warm ear to the cold wood to listen. The decibels were translated into a vision of their source—a basketball-sized cluster of vibrating bees, cut through at regular intervals by rectangular frames of honeycomb. At the center of the cluster was the queen, surrounded by the first tight circle of bees, all heads pointed inward to feed and tend her, all basking in the 90 degree warmth.  Moving out from the queen, the temperature declines, with the outer mantel of bees around 50 degrees, as low as a bee body can go without succumbing to the cold. But in the perfect order of the hive, there is a constant rotation of cold bees to warm zones and warm bees to chilly zones, a sharing of the duties, and of the pleasures and pains of communal life.

The cluster’s steady hum brought me back to a summer’s day when the fallow field of red clover  next to my brother’s vegetable field was alive with busily buzzing bees. They ignored me as I strode bare-legged through their field, each worker intent on bringing home her share of summer’s sweetness. Those hard-working summer bees live only 4-6 weeks, but it’s their efforts that give the colony the fuel it needs to survive the winter. And it’s the winter bees’ sole purpose to use that fuel to power their wing muscles to keep the hive warm enough to actually get through to spring, when the queen will start laying eggs again, from which fresh young worker bees will emerge to assiduously gather up summer’s nectar and evaporate it down into next winter’s honey.

The seeming miracle of a colony of cold-blooded insects keeping their home tropically warm on a 15 degree morning is possible only because many worker bees pumping their wing muscles without flying produces heat in the same way that shivering helps us to warm our own bodies. The hum I was listening to, the soundtrack of my reverie, was bees using honey’s caloric energy to rapidly contract their wing muscles to stay alive into another season.

I suddenly realize that, scarcely an hour ago, I put a teaspoon of their precious fuel into my cup of hot water and fresh squeezed lemon. For a moment, I am guilt-stricken. Then I listen once more to the living bees humming, and glance once more at the crystal bees glistening, and I say thank you, thank you, to the quick and the dead.